The Winery Tour and Brewery Tour 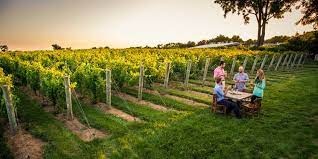 Winery and Brewery Tours are all the rage now.  Are these manufacturing enterprises or tourist sites?   A little of both, but more of the latter.


When we had the house in Central New York, we loved to go to the wineries.   Since many were on the finger lakes, you could go by boat, which was a lot of fun, particularly if your boat had a kitchen and a refrigerator full of chilled finger lakes wines.

As production wineries, though, most were less about mass-production of wine (like Mondavi in California) but more about the tourist experience.

And in recent years, this trend has accelerated, perhaps too far.  Virginia started promoting wineries as a means of weaning farmers off tobacco.  Breweries followed, along with distilleries.  You can spend days in Western Virginia, touring breweries, wineries, and distilleries and destroying your liver in the process.  Good thing people aren't smoking!  Michigan now touts itself as the "Beer State" as they no longer make cars.  You can take the "beer tour" which is nicely mapped out by the tourism department.

Wisconsin has its share of micro-breweries as well, thanks to its Germanic heritage.  And of course Hipsters all over the country love to visit their micro-brewery bars and restaurants, which are often little more than restaurants with a few copper tanks in the front window (as was the case in Alexandria, Virginia).

Are these actual working wineries, breweries, and distilleries, in the sense they are cranking out cases of wine, beer, and booze like GM cranks out cars?   Not really.  Yes, they produce product, but in most cases, more than half the product is consumed on-site, and the prices are so high that the products are not competitive in the marketplace.

There are exceptions, of course.   Some finger lakes wines are sold nationwide, as are some Virginia wines.  Some micro-brews, like Bell's (no relation) can be found in nearly every State.  Others, like Sam Adams, get bought out and turned into major brands.   And it is a big debate in these industries - do you take the buyout?

Recently the owners of Devil's Backbone in Virginia got a lot of flack for taking the money from the Budweiser people.   But as the owner noted, if he wanted to continue to grow, he would have to borrow a ton of money, risk everything he worked for, and if he failed, he would lose it all.  "Selling out" might not be popular with his peers, but it was a guaranteed payday, and you won't live forever.   If you start a business, isn't that what you strive for - to be successful and retire?   Perhaps the other, lesser breweries are just jealous.   A lot of people on the Left are stupid like this - denouncing success as if it were a virus.

But getting back to this trend, you can tell that most of these operations are not "production" facilities because they generate most of their income from the restaurant, the tastings, the bar, and the weddings. For wineries, weddings generate a huge amount of income, and make use of the extensive facilities that most wineries build for that very purpose.  The wine becomes a somewhat secondary thing, and some vintners get quite pissed about this.

A winery across the lake from us is a case in point.  We liked to go there and tie up the boat, have a sampling of wine, buy a case (or two) at about $20 a bottle (or more), and then have lunch in the restaurant, with a bottle of wine, of course.   It always amazed me how many people will go to a winery and have lunch and order lite beers.  You're in a freaking winery, folks!  Oh, well.

Anyway, we were members of the "wine club" and got a discount and every year they would put on a dinner for the club.  It was a pretty raucous affair - people wanted to have a good time and have fun. But the owner had other ideas.  We were supposed to sit in silence while he waxed poetic about his wines and we would all carefully sip each vintage.

But that is not why people buy and drink wine, no matter what anyone tells you. Wine is an alcoholic beverage, and if it were not, it would be about as popular as grape juice.  The tasting and flavoring of wine is important as it is in all alcoholic beverages - as a means of disguising the taste of alcohol, which is an industrial solvent.  We chill beverages, put bubbles in them, flavor them, mix them, and so on and so forth so it won't taste like Drano.  And the result, particularly with wine, can be quite fantastic.   And it is an art form.

But to decry people for enjoying wine is just asinine.

So his winery morphed from a destination place to go, to just a place to stop by, and of course, we stopped going.  There is one other thing about wine - or any form of alcohol - it should be paired with food for the best effect.   So closing the restaurant and then asking people to drink on an empty stomach is not really being "serious" about wine, not when you could have done fantastic wine pairings.

And sadly, the "winery tour" business has devolved into drunken debauchery.  Bus tours and limo tours go up and down the lakes, with people stopping by as many as 10 or 15 wineries in an afternoon (way too many in my opinion, three is about the max).   They flood the tasting room wanting their $5 sample and then leave without buying a damn thing except maybe a refrigerator magnet.

And some wineries make money only from tastings.   As one taster put it to me, if you pour in a miserly manner, that $5 sample is more expensive, in terms of dollars per ounce, than selling an entire bottle for $25. So when you come in and say, "Gee, I'd like to buy a case of your wine, do you offer a case discount?" they ironically are not happy with you as they are selling product to you cheaper than they can sell it in miserly "tastings" portions.

And the double-irony is their prices, at $20-$25 a bottle, are nearly twice what you'd pay at the local wine shop for a bottle of wine from France, Chile, Argentina, New Zealand, Australia, or even California - for a better bottle of wine, to boot.

The limo and bus tours were the worst part of the winery experience.  If you saw the bus pull up, it was time to duck out the back door.  And these folks were usually the least appreciative of the wines, just wanting to get drunk.  The most popular wine in the finger lakes was something called "red cat" which tasted like Hawaiian Punch and had the same color.  The tourists lapped it up.

So the irony to me is that this fellow closed off his winery to all but tastings.  So now he gets bus tours, and the people least interested in the quality of his wines.  They all flood the tasting room with their little glasses on a string and say, "gimme!  gimme!  gimme!"

So is this trend a good thing or bad thing?  Well, since these small wineries, breweries, and distilleries cannot even dream of competing with mass-producers from here or overseas on price and even quality, it only makes sense to sell the experience as well as the product.   And there is nothing wrong with that, in my opinion.  After all, it is the experience of beer, wine, or liquor that is important, not the mere consumption of it.

I mean, which is better, to sit down at a table with friends and have some good wine or beer or cocktails, with some hors d'ouvres - or to sit in a darkened room by yourself downing shots of cheap scotch?  If you are doing the latter, something is quite amiss in your life.

The winery tour, brewery tour, and distillery tour movement is about entertainment as much as it is the product, and these businesses should embrace that, because these are profitable aspects of the business.  Wedding bookings alone can double your bottom line.

People don't come to your winery, brewery, or distillery to see a factory. In fact, when we go to these kind of places, and they offer to show us the "works" we usually decline. Once you've seen one set of stainless steel casks and copper brewing pots, you've pretty much seen them all.  Unless they have a funky wine cave full of oak barrels or something (and usually these are off-limits to tourists anyway, or should be, if you want to maintain temperature and humidity levels) there really isn't anything interesting to see, in terms of industrial process.

So have a cold beer and a sandwich.  Or a bottle of wine and a cheese and charcuterie tray  Or cocktails and hors d'ouvres, and enjoy the ambiance of the rolling green hills and lines of grape vines or whatever.

It is all about the experience - which pretty much sums up life.
Newer Post Older Post Home