How GM Will Go Bankrupt - Again 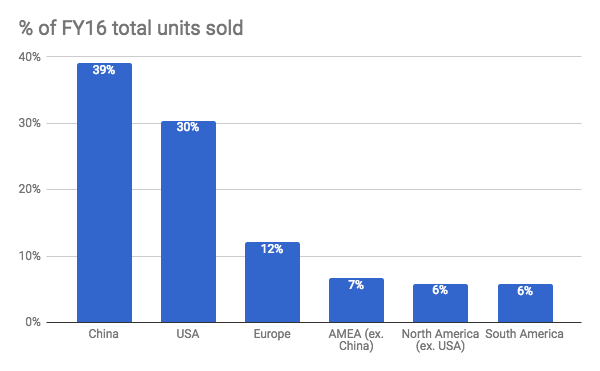 GM is once again leveraged out on a limb.  Most of its profits are made in China and the United States.   After exiting the European market (where it was losing money) its footprint is much smaller, and that action is having a domino effect on operations.  GM recently announced plans to shut down a plant in South Korea.  Many of the cars sold in Europe under the GM badge were actually made in Korea.  With the withdrawal from the EU market, GM has more capacity in Korea than it needs.  It hardly sells any GM cars in Korea (or all of Asia for that matter - other than China).   Only a few models are exported to the US - and that number is limited by the UAW, who rightfully fears that more jobs will move overseas if GM imports more cars from Korea.

China is the big problem for GM.   It sells 70% more cars in China than it does in the United States  (See the chart above).  GM is acting like this will go on forever - and it won't, because the Chinese won't let it.  And a trade war may accelerate the inevitable.  The Chinese are following the same path as Japan and Korea before it, albeit in a slightly different manner.  They are building up their domestic industry and domestic market before exporting overseas.   Right now, they export a lot of car parts, but few actual cars.   That will change.

The switch from a Communist economy to a free-market one was accomplished with a number of joint ventures with American, European, and even Japanese companies.  They let us build factories over there so they could learn from us. (My own father went to China in the early 1970's to establish a clutch rebuilding factory).  And in the beginning, it was pretty hilarious.  Those half-assed attempts at car-making were chronicled in Beijing Jeep - actually two books of that name.   But decades later, no one is laughing at China anymore.   They have done their homework and are making better and better products - as evidenced by the fact that more and more parts of American cars are stamped "Made in China" and now even cars are being shipped here.

It doesn't take a rocket scientist to see that China's goal is not to let foreign powers perpetually make profits from its home market.   Eventually, China will take over and push out foreign competitors. And some recent trends could accelerate this process.  First is the world-wide shift to right-wing politics, strongman dictatorships, and nationalism.  Countries across the world are installing President-for-Life strongmen who are beating the drums of national pride.  Russia, China, Indonesia, Philippines, Turkey, Poland, Thailand, Cambodia, Venezuela - just to name a few.  Not to mention our own President, or the "go it alone" philosophy of Brexit.

In this environment, Chinese citizens may no longer covet the Buick brand as they did before - the only reason, by the way, that GM dumped Pontiac and not Buick - China sales.  As nationalistic fervor takes hold, having a Chinese-branded car will be seen as a matter of national pride (much as in Korea today).  This will not bode well for GM.

Now throw in a trade war.  We start putting tariffs on everything made in China, and the Chinese will strike back - first against imported American goods and then to American joint ventures in their country.  Under a new nationalistic, communist regime, it is not far-fetched that foreign joint-ventures could be nationalized, or at the very least, made so unattractive that GM and others sell out to their Chinese partners.   This would cut GM sales by more than half.

On the other side of the Pacific, American carmakers are making record profits - the same way they did back in 2005.   They are geared up to make huge trucks and SUVs, which generate well over $10,000 profit per vehicle.   And so long as people keep paying $70,000 for a pickup and $100,000 for an SUV, the party will go on.   But as we saw in 2008, sales can drop off to nearly nothing overnight, once gasoline goes up to $5 a gallon or more.  Combine that with job anxiety and layoffs, and sales of expensive cars will suffer dramatically.   And since the "Big-Three" either break even or even lose money on domestic small car production (which is why they import most of their smaller cars) they could go from profit to loss overnight.

The Hechinger Effect strikes again, as I noted in an earlier posting.  GM is basically throwing in the towel in any market where it cannot make huge profits.  Rather than trying to turn around poorly performing businesses, it is just throwing them away.   Peugeot bought GM's European operations - clearly they think they can make money at it.   Instead of trying to provide a product line for every market segment - "a car for every purse and purpose" as Alfred Sloan opined back in 1924, GM is choosing instead to only go after customers who are loaded with cash - or are willing to go into hock big time - to sell highly profitable vehicles.   Maybe this business model works for Mercedes, but even they sell more plebeian cars in other markets (the A- and B- class cars).

GM is out on a limb here - leveraged into a corner based on two propositions.  First, that business in China will continue to boom and make huge profits for the company.  Second, that the SUV and pickup truck craze will continue unabated - even though history has shown otherwise.   If either of these two propositions fail, GM will fail as well, as sales will essentially drop to zero.   And this could happen literally overnight, as government policies in China and the collapse of SUV sales in 2008 both illustrate.

Even assuming such dramatic events do not occur, GM is still screwed, but doomed to a slow-motion death.   China might not nationalize businesses or retaliate against joint-venture partners right away.  After all, they hope to export cars to the US, and don't want to piss off American companies.   But then again, if Trump escalates a trade war, they have nothing to lose, right?   But regardless, I think you can see that over time, Chinese manufacturers, as they gain skill and knowledge and make better and better products, will take more and more market share in China - and eventually the Chinese will buy more of their own products.   GM's Buick miracle in China can't go on forever.

And even assuming that Americans remain batshit crazy about 15 mpg SUVs and pickup trucks that cost in the neighborhood of a hundred grand, it is only a matter of time before the competition steps in to offer similar products.   Toyota and Nissan already offer monster trucks (Tundra and Titan) and SUVs based on those platforms.   BMW and Mercedes make SUV vehicles, and it is only a matter of time before BMW revives its plans for the X7 (which was abandoned the last time SUV sales when into the tank).  Nature abhors a vacuum, and you can only sell so many $100,000 SUVs before a competitor comes out with a nicer one for $99,000 and cuts into your sales.

That is the nature of the free market - unless you can have a monopoly or duopoly and control prices and market access, you cannot reap windfall profits on a regular basis.   And in the car business, there is much competition and way too much capacity, worldwide.   GM's resuscitation may be short-lived, or doomed for eventual failure, unless it can figure out how to make profits across the product line and in all markets.

And this is not impossible to do.  After all, the Japanese and Koreans and Germans have been doing it for some time now - running car factories in the USA and making profits on all sizes and types of cars.   It takes sharper and more disciplined management, as well as a lack of unions, or at least having unions that are more pliable,

Sadly, it seems that GM is incapable of this sort of management.  Instead, they are cherry-picking profitable products and markets, and like a child with a temper tantrum, picking up their toys and going home, whenever the going gets tough.

As you can imagine, I never bought any of the new GM stock.  They are making money today, to be sure.   But I can't see how this will be a long-term prospect, when it is predicated on two very shaky foundations - China sales and SUV sales.
Newer Post Older Post Home