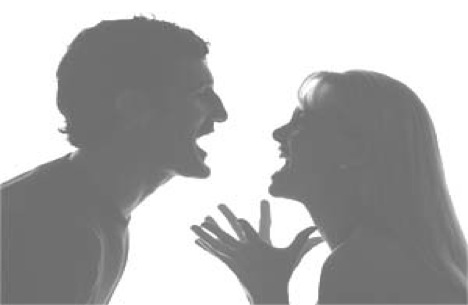 Our brains are designed for communication - yet we do such a shitty job of it!


Ronald Reagan was known as "The Great Communicator" because he could get his ideas across, whether you agreed with him or not.   Others are less successful, either in the public forum, or private life.  Miscommunication can result in a number of problems, and yet it seems that many people intentionally try to screw up basic communication through psychological sabotage.

I noted before that we live on retirement island where many people are elderly and many of the men, in particular, are going deaf or are hard of hearing.   When the wife says something to them, in an almost whispered tone, the husband says, "Can you repeat that?  I didn't hear you!"

To which the wife says, "Never mind!  It wasn't important!  Get a hearing aid!"   Which is kind of a hateful thing to do, as it took more energy to say that, than "Can you take the garbage out" in a slightly louder voice.

But you see other, very subtle ways of sabotaging communication between couples and friends, and when communication breaks down between two people, relationships break down.   And one way people break down communication is not through lack of effort, but because of too much effort.  Our brains are programmed to pick up subtle cues in communication, inflection, tone, and body language, and often we mis-read these things.

One reason we have "emoticons" (and sadly, a movie based on them) on the Internet is that written communication is lacking those subtle physical cues.   You send an e-mail that you think is wry and humorous, and it comes across as nasty and mean - without the smiley-face emoticon at the end of it.  So you piss off a friend or colleague, and when you reply that "I was just joking!" you are not making it better, but worse, as now you are accusing the recipient of being humorless.  You can't win.

And this is one reason, I gave up on being funny in e-mails - at least not subtly.  And certainly not even that with clients and other business relationships, particularly overseas.  It just isn't worth it, but better to "play it straight" and be factual and concise.

But since our brains are programmed to look for subtle non-verbal cues and to "read between the lines" even in written communications, often the recipient can screw-up even a simple basic conversation.

For example, the husband asks the wife, "Is the garage light on?" as they are going to bed, and he wants to make sure it is shut off before going to sleep.   The wife, instead of looking at this as a basic factual inquiry, kicks the brain into overdrive.  "What is he actually asking here?  Is he saying I neglected my duty to shut the light off?   Is he mad that I left it on?   I don't want him to be angry with me!"

So she responds with something emotional rather than factual.   Instead of saying, "Yes, it is on" or "No, I shut it off" or "Gee, I don't know!" she says, "Well, I'm sorry I forgot to turn it off!" or "How the fuck should I know?" or "Why don't you go see for yourself?" and an argument ensues.

Dealing with emotional people is difficult, and often you have to phrase questions carefully - with emoticons - lest the misconstrue everything you say.  So instead of "is the garage light on?" you have to predicate it with, "Gee, I can't remember if I left the garage light on.  I guess I'd better go out and check before going to bed.  You don't recall if I left it on or not?" which may or may not work, as the wife may now think that somehow she has failed in her duty to monitor the garage light and will lash out at you in response.   Like I said, you can't fucking win at these games.

A simple binary question with two legitimate answers (perhaps three):  On, Off, or I-don't-know.   Yet loaded with freight.

Worse yet are the folks who think they are clever and try to freight everything they say with double entendre and hidden meanings.  They phrase everything they say so it might have two meanings, or maybe could be taken at face value or as sarcasm.   Such people are tiresome, and I blame the sit-com on television for promoting this sort of nonsense.  On the TeeVee, everyone says clever things dripping with sarcasm.  So folks think this is how you talk in "real life" - with daily insult humor.

My late Mother loved the double entendre bullshit - thinking she was "clever" by loading up basic communication messages with a sub-band of emotional freight.   I simply chose to ignore the latter, which drives that sort of person crazy.   They made a withering comment about your personality, and all you said in response, was, "The garage light is off" without emotion or drama.   Such folks will quickly move on to their next victim, finding no satisfaction in you.

So how do you avoid this sort of unnecessary drama?   Well, it starts with avoiding dramatic, emotional people.   Folks who like to think they are clever and subtle are just annoying.  You can't ask them a straight question and a straight answer - so just walk away from relationships like that, even if it is with your own family members.  If it is at work, find a new job.

With other folks - the type who look for hidden meanings in everyday conversation - you can either get drawn in to the "walking on eggs" syndrome when you are around them, carefully phrasing each statement or question so as to make your meaning crystal clear, with no emotional subcontext.   Good luck with that.  The lack of emotional subcontext, in and of itself, will be viewed as some sort of emotional signal.   Like I said, you can't win for losing.

Mark often tries to explain to others that with me, What-You-See-Is-What-You-Get and that I have no emotional subcontext to understand or hidden meanings in my speech.   This tends to frustrate a lot of people, as they ignore what I have to say, and look for a subtle, different meaning wrapped up in emotional cues.   And they can't find it, because it isn't there.   I'm just not smart enough or have enough energy to think of shit like that.

And I assume people probably look for that in these blog postings.   But WYSIWYG with me, I'm afraid.   No subtle context.  I am about as subtle as a brick.
Newer Post Older Post Home