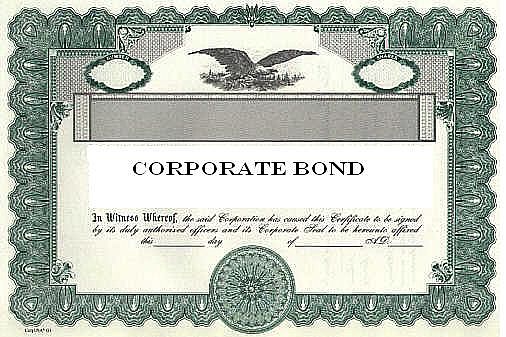 Corporate bonds may be headed for a downturn. How will this affect you?

If you have a 401k or IRA chances are you own some corporate bonds whether you know it or not. Almost all mutual funds at least have some bond aspect to them other than perhaps index funds tied to the Dow or S&P 500.

Or, like myself, you may have actually bought some corporate bonds directly through an online trading site.  We are told by investment advisers that as you get older, you should put more of your money into bonds and less into stocks.   Bonds are perceived as safer and generating regular guaranteed income - provided the bond issuer doesn't go broke.

Thus, there are bonds and then there are bonds.  Government bonds, particularly Federal government bonds, are a pretty safe bet.  If the United States defaults on its obligations, then really nothing else would matter as the entire economy would collapse - in fact, the world economy.  As I noted before, you can't really make money betting on Armageddon.   Even if you win, you lose.  So, buying containers of food and ammunition and gold really isn't the answer to that long-shot proposition.  A cyanide pill is probably a better bet.

Municipal bonds are slightly more vulnerable, although most municipalities generally pay at least a portion of the amount due for their bonds, or they are bailed out and they refinance their bonds over time. Nevertheless, with the bankruptcy of several major cities in the past, owning municipal bonds can be a nervous proposition.   In some instances, however, they are tax-free, at least at the State level.

Corporate Bonds, on the other hand, are not guaranteed by anything and corporations do go bankrupt on occasion, and leave their bondholders with little or nothing.  As I noted in another posting, at least bondholders and up as creditors in bankruptcy.  And if the company  reorganizes, their debts are often converted into equities and they become shareholders of the new Corporation, much as General Motors Bond holders did when it went bankrupt.

However, shareholders - such as myself - were left with absolutely nothing.  If the company is liquidated, the proceeds of liquidation are then paid to the bondholders.  Again, they make it pennies-on-the-dollar but at least they're getting something out of the deal where is shareholders generally end up with nothing.  So, sometimes it's better to be a bondholder than a shareholder.

And in a few instances, where the company has absolutely no assets left whatsoever, Bond holders maybe stiffed entirely.  But that is a rare event.

The value of the bond depends on a number of factors. While a bond has a face value and a maturity date, if you try to sell your bond before the maturity date it's value depends on what the market receives it to be.  And this is based on the underlying interest rate of the bond as well as the perceived strength of the company.

For example, if you were holding a bond for a corporation that is in good standing but pays only 1% interest, you may find the value of the bond is less than the face value, as investors can obtain higher interest rates elsewhere.  Plus, as interest rates rise - and they are slated to rise and are in fact rising - older corporate bonds will be worth less in the future.

If you hold Bonds in a company that has shaky financial footing, the bonds may be worth less in the marketplace is people perceive a risk of the company defaulting on its obligations.  Thus, for example, if you had bonds for Toys R Us, today they're probably worth almost nothing and in the last few years probably they declined in value precipitously.

2018 looks to be the year that many of these shaky companies go under one by one.  Again, it has less to do with Amazon - or at least Amazon isn't really the major reason - for these companies to go under.  Rather, many of these companies were taken private or otherwise leverage with huge amounts of debt, often issued as corporate bonds.  As interest rates rise, these companies aren't able to service these debts and they default and go broke.

Sears is probably the granddaddy of all of these, although it did not going private but rather just loaded up with debt.  As sales continue to falter and they keep closing stores, it is only a matter of time before Sears folds its tent.   And that event, combined with a number of other retailers going bust couldn't shake up confidence in the bond market as a whole.

Markets have a psychological component, and when one sector of the economy goes down, it often takes every player with it - at least for a while.  Thus, for example when General Motors went bankrupt, the stock of Ford Motor Company went down also, even though the company was in far better financial shape.  Thus, if a slew of bond defaults occurs in 2018, the overall confidence in the corporate bond market will be shaken.

People will start to look more carefully at their bond holdings and also at the corporate finances of the companies issuing the bonds.  And it may be harder to sell those bonds as they'll be fewer buyers as they'll be scared off by tales of people losing their shirts on Sears corporate debt and the like.

The bond market, like the stock market is based on the laws of supply and demand.  And if everybody is selling and no one is buying, the prices are depressed - whether it is rational or not.  The idea that Bond and stock prices are accurately assessed in real time as a rational evaluation of the market is a fantasy and myth.  But many people still believe this.

So what does this mean for you and me?  Well it means that our bond holdings will probably go down this year as interest rates go up and as companies go bust in the bond market gets shaken.  It also means that could be strategic opportunities to pick up some bonds for a fraction of their face value.

I mentioned before that during the 2008 recession I had a chance to buy Mohegan Sun Casino bonds with a rate of return of 244%. People felt that the casino was going to go bankrupt, and the bondholders could not even be converted to equity holders in bankruptcy, as only Indians could own shares of the casino.  As it turned out, the casino is still in business and the bondholders were given a very generous offer to fold over their notes into new notes at a higher interest rate, and were paid a bonus as well.  If my time machine was in working order, I would go back and buy as many of those bonds as possible.  But time machines don't exist.

So yes, it may be possible to time the market and pick up some bonds for cheap in the coming months as the bond market declines.  However, determining which company bonds to buy will be very difficult.  You could buy bonds in a company that may double in value within a year, or that same company make go bust and leave you with pennies on the dollar.  It is very hard to tell.

The bond market does illustrate that there is more to the economy than the DJIA.

The only thing that is certain, is that we're in for a bumpy ride in the future, only because things have been stable for so long.  And the only certain thing is that rising interest rates, rising inflation, and a tariff war will have some effect on the economy.   How much of an effect remains to be seen.  Pretending these things won't have any effect, however, is just foolish.
Newer Post Older Post Home