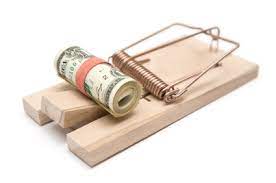 When you become successful at something, it often blinds you to other opportunities.


The success trap is a term used to describe a problem which occurs to companies and organizations which become successful at what they do, to the point where they stop investigating opportunities outside of their area of success.   Many examples of companies falling into the success trap are given, Polaroid and Kodak being two examples - companies that made their fortune in film photography and were unable to appreciate how digital cameras would be a game-changer.

It is like the time I was working at Carrier, testing a split-system unit from Japan.  I was fascinated by the delicateness of the machinery, how quiet it was, and how aesthetic it looked when installed.   Some "suits" from corporate came into the lab and one asked me what I thought of it.  I told him it seemed like neat technology.   A blowhard from the window unit division piped up, "Americans will never buy it!  They like window units!"

And he was right about that, in part.  Window units still sell in large volumes.  But split systems are becoming more and more popular, and the company missed a ground-floor opportunity to get into it early.   Of course, today, they sell them - after resisting for nearly a decade.

For many companies, the success trap doesn't mean going out of business, only that they fail to make as much money as competitors and return on investment shrinks. And often shareholders and board members force this narrow-thinking, concerned only about increased profits for the next quarter, and not long-term market trends and opportunities.  Companies can flounder around like this for years - even decades - before the market changes enough that they go under.  Such was the fate of Kodak and Polaroid, for example.   And such will be the fate of other companies in the future.

You read about this all the time, too, and the signs are there.   A company sells off divisions to "focus on our core competencies" - which is a code word for "we're going to make just one thing."   Trouble will surely rise ahead.

Xerox is another example of this problem.  Calling itself "the document company" it funded advanced research at the Palo Alto Research Center (PARC) and basically invented e-mail, the graphical user interface, and the mouse.   But the corporate powers-that-be pulled the plug - after all, they were a "document company" not a computer company, right?   But before they threw all that technology in the trash, they gave demonstrations to a young Steve Jobs and Bill Gates.

Sometimes, however, branching out into other technologies can still kill you off.  IBM famously designed the architecture for the PC - and then let anyone copy it.   It became a de facto industry standard for computer design, but since anyone could copy it, they did - for far less than IBM could sell them for.   The rest is history.  IBM is some sort of "enterprise solutions" company - a mere shadow of its former self.

Of course, the bus that IBM didn't see coming was the shift from hardware to software.   Back in the day, you bought a computer and then hired a programmer to program it - and that was a full-time job.  Every company had its own custom software - the idea of buying an accounting program "off the shelf" was mostly unheard of.   And I know I felt that way, when I bought my first computer - after all, I wrote computer programs for a living, why would I want to buy someone else's program?

But all that changed, of course, as programs became incredibly complex.   Writing your own programs today would be like assembling your own car at home - a costly and complex task that would only make sense if you were being paid to do it.

Sadly, the success trap is hard to avoid.   You want to make money for your shareholders, so you focus on doing things that make money, and cut research and experimental projects to the bone.   For example, when I worked at Carrier, we had an unapplied research division, staffed with PhDs, who were tasked with raw research into whatever area of technology and science they were interested in.  I am not sure it ever resulted in a new product development or cost-savings for the company, other than the cost-savings achieved when they closed the division when it was acquired by UTC.  From an investor standpoint, it was just unnecessary overhead.   And there is a point to that.

Today, we see this happening in many industries.   The US car companies are again falling into the same trap they fell into back in 2005 - making all trucks and SUVs.  Ford has promised to shed more car lines and concentrate on profitable trucks - raising truck content from 70% of their product line to 85% (presumably the other 15% would be Mustang).   This is perhaps a smart strategy in the short-term, but long-term, trends may change, particularly if the economy goes sour or the price of gas skyrockets - both things that happened in the late days of the Bush administration.  Suddenly, you find yourself with a sheaf of products that no one can afford to buy or fuel - and you go bankrupt, as GM and Chrysler both did.  Perhaps if both companies went through a real bankruptcy, things would be different today.

And there may be other companies falling into this trap, about to fall into it, or having fallen into it but not realizing it yet.  Companies that make wild profits on a single product, but are not diversifying into other areas.  Apple, for example, has all its eggs in the iPhone basket, which is wildly profitable for them.  But for how long?   Once market saturation is achieved, it becomes a game of margins - and indeed already is.   New product announcements are not being met with gushing reviews and long lines at the stores (which, by the way, I wonder if were manufactured, like so much else, using social media?).

It is an interesting phenomena, and I don't really see a way out of it for most companies.  Most companies diversify or move in new directions only when forced to do so by circumstance.   One of my semiconductor clients, for example, morphed from a VGA controller manufacturer to a smart phone mixed signal chip maker - following the market - but only when the VGA market basically collapsed due to oversupply.

In our personal lives, we can fall victim to the same problem.   We do something and become successful at it and in a way it becomes a trap.   It's all we know how to do - we are rats in a Skinner box pulling a lever for pellets, and over time, we have to pull this lever more and more for fewer and fewer pellets.   Rather than trying a new lever, we just keep jerking the old one, wondering where all the pellets went.

We see this in impoverished areas of the country, where people pine for the coal and steel jobs to come back - and vote for a megalomaniac who promises them these messy and underpaid careers (so far, delivering nothing on the coal front, and 500 jobs for the steel industry!).  Rather than pick up and move away from depressed areas, find new jobs skills and new jobs, they stubbornly refuse to move, insisting that the world be brought to them.   And sadly, politicians pander to this mentality, promising to "bring back jobs to Flint, Michigan!" or some such nonsense.

Some folks go so far as to decry ambition and innovation as some sort of conspiracy.   One fellow, in a newspaper article, thought that the lack of jobs in his impoverished rural county was a conspiracy to "move all the people to the cities, where they can be more easily controlled!"   He fails to see that the migration from rural to urban areas has been a trend that has been going on since the founding of our republic - as fewer and fewer people are needed to run a farm.

The success trap can stymie you when it comes to investments as well.   For example, I made a lot of money in real estate in the 2000's and then sold out of it and never went back.   A lot of the people I knew back then were trapped in the business.   We would attend cocktail parties in Ft. Lauderdale in that era, and everyone in the business agreed that some sort of "correction" was coming.   But as one agent told me, "This is all I know how to do!  I have to keep selling!" - even through she knew the houses she was selling, particularly toward the end, were destined for foreclosure.   The idea of changing jobs or careers was just not even considered - until the market crashed and many were forced to do so.   Others reinvented themselves as foreclosure and short-sale specialists and managed to thrive on the downside as well.

Just because something is successful doesn't mean it always will be successful.   Markets change, and "disruptors" in the market can destroy a product line's usefulness overnight.   Even if the market is stable, as more and more people get into the market, margins will get thinner and thinner, eventually eroding profitability.   A company making commodity products can only hope to make a marginal profit, over time, as others hone in on the action.
Newer Post Older Post Home