Heinlein Predicted It: The Crazy Years 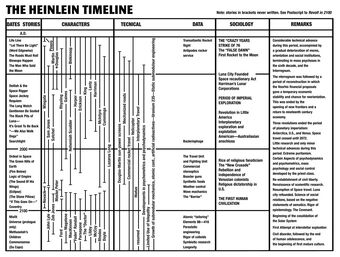 In Heinlein's future history, he predicted a period of mass-insanity.  Has that time come and gone, or is it happening now?   Or does this sort of thing just happen every so often?


Future History, Heinlein called it.   Actually, it was sort of a post-hoc cobbling together of a thread connecting all of his various short stories, novellas, and novels, which he then used as a map for future writing. He wasn't trying so much to be a futurist, like Faith Popcorn, but providing a background for his other stories, so that he could pick up characters and situations later on, or refer back to them in later stories.

The "Crazy Years" was a time he predicted that would occur after the war and before the first moon landing, when social mores and society in general would break down.  Some have said this was his prediction of the 1960's hippie era, as well as the dramatic rise in crime rate and loosening of social and sexual mores.   But like any good prediction, it helps if you can amend it after-the-fact.

In 1987’s To Sail Beyond the Sunset the heroine gazes back from the distant future on that era of mass psychoses:

Cocaine and heroin called “recreational drugs”, felony theft called “joyriding” … felonious assault by gangs called “muggings”, and the reaction to all these crimes was “boys will be boys”, so scold them and put them on probation but don’t ruin their lives by treating them as criminals…

Yes, it is nice, like on The Simpsons if you can predict the future after it happened.   There are so many "Simpsons Predicted It" memes out there, where some episode of the Simpsons is deemed to have "predicted" the future, when in fact, the episode in question (such as one covering Trump running for President) were written after the fact.   The meme-generators count on the fact that no one watches the Simpsons anymore (except dullards) to make the show seem prescient.

The later Heinlein books are, of course, less satisfying than his earlier works.  He sort of came out of the closet as a libertarian, and the plot lines (such as they were) tended to gravitate toward heroes and heroines, who, when not having sex, were gunning down proctors and police.  He definitely had an anti-authoritarian streak at that point, was becoming much more conservative in his politics, from what I can divine.

But getting back to The Crazy Years, I don't think Heinlein thought when he coined the term that it would be about the 1960's or 1970's (when crime really started to increase) but posited it as a time of cathartic release, when people collectively lost their minds.  And I think such times occur repeatedly throughout history - mass hysteria takes over and people go on crime sprees, or just engage in silly antics.

In the 1920's, a time of prosperity for everyone - except farmers - we saw young college kids hopping up old Model-T's, wearing raccoon coats, saying odd things like "23-Skiddoo!" and swallowing goldfish live.  It was called the "roaring 20's" and sexual and social mores were loosened considerably.    My own grandmother would don a "flapper" outfit and visit the speakeasies or "blind pigs" in New York, dancing the Charleston to cheap bathtub gin - appalling her conservative Lutheran parents.

The stock market crash of 1929 and the depression of the 1930s were a far more sobering time - the hangover of the party of the decade before.   And perhaps the war years were a cathartic release from those dreary times, followed by the conservative social values and clean-cut living of the 1950's.  If the pattern makes any sense, it follows that the 1960's would also be another time of unrest and silliness.   Assassinations, riots, protests, and people just doing weird things.

And maybe the late 1970's and early 1980's, when it was "morning in America" with Ronald Reagan as President, made us as sober as coffee in a Styrofoam cup.  Perhaps.   Or perhaps I am retroactively fitting the data to the model, as Heinlein did in 1987.

But then again, maybe it makes sense.  After the sobering decade of 9/11 and the even more sobering decade of the 2008 economic meltdown, people need some sort of cathartic release.  We are seeing a rise in violence and crime that hasn't been seen in decades.   And protesters and activists of all political bent are acting out their fantasies in the streets, whether it is torching a fast-food restaurant, or gunning down some poor store clerk who asks them to wear a mask.  Insanity is the new norm.

Meanwhile, the stock market continues to go nuts, with a new generation of "true believers" who think they can leverage the pitiful money they've managed to accumulate into Billions - overnight.  If only they can spot "the next big thing!"   This time, for sure - it has to be some company making a virus vaccine, right?  Same sort of shit we had in the roaring 20's.

One would think something as sobering as this virus would tamp down the more extreme nonsense going on in society today.   But it seems if anything, the virus has brought all the nutjobs out of the woodwork, encouraged, no doubt, by dog-whistles from their political leaders, and of course, subtle postings on Facebook and Twitter from our friends at the Russian Internet Research Agency.

Eventually, people will settle down. Even the most rabid Antifart activist and self-proclaimed "organizer" gets tired of throwing Molotov Cocktails, if nothing else because he gets a rotator-cuff injury.  Age, if nothing else, mellows out the crazy.

But we'll just have to wait and see. In the meantime, I am trying to stay away from cities.  I don't want to be that guy who was nearly beaten to death after the Rodney King verdict.
Newer Post Older Post Home