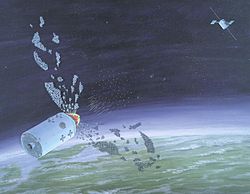 The next war will be held in space and cyberspace.

Imagine one day you wake up and try to retrieve your email on your smartphone.  For some reason it's not working, and you're not receiving any text messages, either.  You go to your home computer and try to log on to your banking website. The Internet connection is interrupted.

You turn on your cable television, but more than half the channels are showing up as blank static. What the heck is going on?

It turns out that our entire economy and communications infrastructure is based on a few weak links. And these are weak links which our opponents in the world have been steadily exploding.

The internet relies on a few fiber optic back bones which snake across the oceans of the world. These are fiber-optic back bones which we have caught the Russians tampering with more than once. They have sent submarines and remotely controlled vehicles to intercept and tap and possibly sever in the future. It's not hard to do. All you need is a few strategically-placed remotely controlled explosive charges.

In space, we rely on a number of geosynchronous satellites for major communications - television, Internet, and telephone.  Russia recently launched a satellite designed to smash such communication systems. In response to a single command, all of these communication links can be severed simultaneously, wreaking chaos upon the Western world.

Imagine when you eventually log on to your banking account, you find no record of any of your investments, stock portfolio, or 401(k).  All this stuff in the "cloud" has been erased, or encrypted, or is just not accessible - and may not be, for weeks or months.

You go to the store to buy groceries - none of the scanners work, and even if they did, the credit card machines are down and there is no way to pay for anything, other than with cash.   You thought the toilet paper hoarding was bad - imagine not being able to buy anything.

It is a scary scenario, and one reason why the Pentagon is taking this stuff seriously.   In a way, we already are in a cyber cold war.  Our largest trading partner, China, is continually probing and attacking our Internet infrastructure, trying to ferret out secret documents, or just create chaos.  North Korea has resorted to cyber-ransom to raise capital and damage US companies.  They get some underling to cough up his password using social engineering and then encrypt the company's computers, holding them for ransom with Bitcoin.   No good ever came of Bitcoin.

Our terrorist friends use similar techniques to fund their misadventures.   And of course, Russia uses the Internet to influence our politics and even civil discourse - making it as uncivil as possible.  These are not our friends.  Yet we are tied up, economically, with China.  They buy our food, we buy all the crap they make for cheap.

Of course, we also are involved in this sort of thing.  Supposedly the Stuxnet worm was created by the Pentagon with the help if Israel to infect computers controlling Iranian gas centrifuges, causing them to over-rev and fly apart.

I am not sure what the point of this posting is, other than to point out that this threat goes beyond your Grandmother or Grandfather sending off money to Nigeria or having their Facebook account hacked.   Our opponents in the world - and we have opponents, make no mistake about that - are keeping pretty busy figuring out ways to compromise our networks and our systems.  Many of these exploits are merely tested and then set aside for possible later use.  Others are used directly, to create mayhem, or to raise money.

In the event of a war - or even threat of war - all of these exploits, both virtual and physical, could be employed and create such chaos in the Western world that we would be too distracted to respond to, say, an invasion of Taiwan, or the Ukraine (oh, wait...).

There are some who say this is all overblown - that people are seeing "A Russian behind every tree" and that the Chinese and Russians have only friendly intent.   Of course, that sort of talk is likely propagated by guess who?
Newer Post Older Post Home