What's the Deal with Inflation? 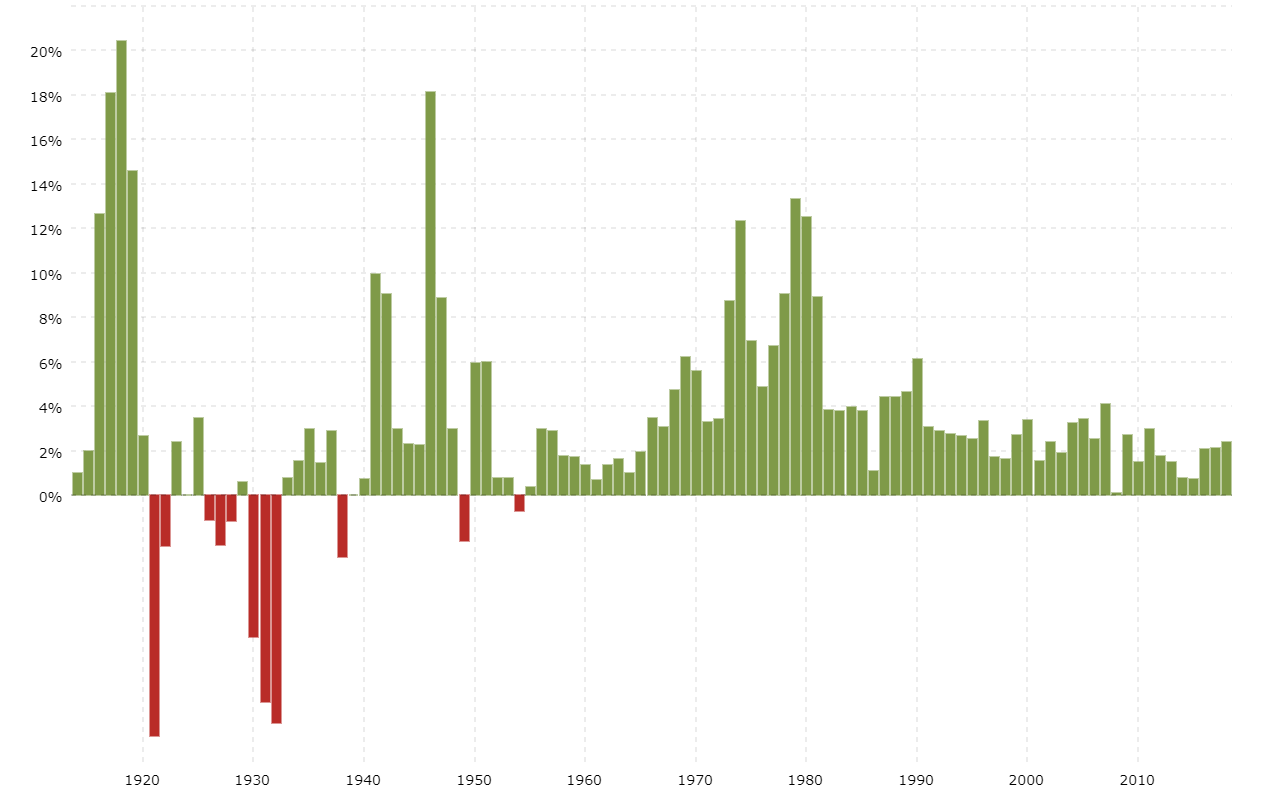 People on the far-right are obsessed that inflation is going to ruin the economy, even as inflation is at all-time lows.  They also believe Hillary is running a pedophile ring out of a pizza shop.  Go figure.


When I graduated from high school, inflation was soaring, by American standards.  We haven't had the ruinous inflation that places like Wiemar Germany, or Argentina or Chile have had (and Venezuela is presently having) of 100% or even thousands of a percent, in annual terms.  But even 10% inflation was a lot, and prices of everything went up, and people's expectations of life went down.

As the above chart illustrates, inflation in the last decade has been at "normal" levels of a few percent or so, sometimes less than one percent.  Of course it is hard to chart inflation as technology changes. Adjusted for inflation, a "telephone" of 1960 costs as much as, if not more than, a standard smart phone (not Apple!).   The two might be considered "phones" but only one had a dial - and a dialtone. Similarly a television today costs far less in dollars (and even further less in inflation-adjusted dollars) than one of 30 years ago or even last year.   My Dad's 25" RCA Colortrak cost more than the 46" flat-screen television I own - and that's in dollars, not inflation-adjusted dollars.

Cars?  While the new SUVs and Trucks are scandalously expensive, they are also technological wonders.   The 365-HP twin turbocharged engine in my truck is smaller than a sewing machine, once you strip off all the plumbing attached to it.   And it, like the body of the truck itself is made entirely of aluminum - well, except the bits that are plastic.  Towing a trailer we are getting 14 MPG in the flatlands.   Pretty amazing stuff.  But I digress.

When I was talking to the annoying man, one thing he harped upon was how "The Fed" was ruining the economy through inflation.   Inflation?  I tried to tell him about "the good old days" of the 70's and 80's when inflation was in double-digits, as opposed to fractional values.  What the fuck was he talking about, inflation?

Well, it turns out, if you listen to one of these tin-foil-hat Ham radio broadcasts or scary websites, they harp on this a lot - so much in fact, that the listeners have no idea what it even means, other than something bad that the "deep state" is doing.   The irony is, of course, that we could see real inflation (and already are seeing it creep up) due to Donald Trump's actions - enacting tariffs that result in real price increases in goods, as well as in spending money we don't have, which dilutes the currency. But for some reason, these same pundits (and their blind followers) don't seem concerned about things that might actually cause inflation but instead have this fixation on it as being something caused by government actors in secret.

Inflation is low today in part because energy costs are low.  The same blowhard I talked to was a big fan of coal - coal would solve America's energy problems!  I tried to explain to him that, thanks to fracking, we are the largest producer of oil and natural gas in the world, and moreover, coal simply doesn't make economic sense in a world of cheap natural gas.  Hillary Clinton didn't destroy coal, nor did Obama - coal went away because of cheap gas.  One sure way to cause inflation would be to force people to burn coal and thus pay more for their electricity.  I just don't get it.  They talk about free markets, but here is an example of a free market at work, and they instantly want to replace it with a command economy.

Back in the 1970's and early 1980's, gasoline was expensive.  And since everything in our technological society runs on fuel of some sort, increases in the cost of fuel increases the price of everything.  As one of my professors at GMI illustrated, it takes a half a cup of crude oil to make a cup of milk in America.   When you factor in the oil used for fertilizers, for tractors and harvesting equipment, for electricity for the dairy barn, the milking machines, and the trucks to deliver the milk to the warehouses and processing centers, energy for refrigeration and so on, it comes out to quite a lot of energy - and a half-a-cup of crude oil doesn't make a lot of fuel.

So yes, it is possible inflation could go up again, if energy costs or some other costs of all our goods rose.   Protective tariffs could do this, for example.  Or if we had another energy shortage.   But right now, inflation is at an all-time low and really can't go much lower before deflation.

Theories about inflation abound.  Some argue that inflation encourages people to spend and borrow. If prices will be higher tomorrow, why not buy today?  If inflation means money is worth less over time, why not borrow money today and pay it back tomorrow in dollars worth less?  Interesting ideas, but I am not sure the average consumer makes such complicated mental calculations.  If your car breaks down, you go out and buy another one because you need it now, not because you think prices will be higher next year.   Our personal lives, at least, are not predicated on such complex thinking.

Deflation, on the other hand, is seen as bad, as it means less money is in circulation, and thus people hang on to money (it is, after all, worth more in the future) and commerce grinds to a halt, or at least slows down.  Putting money into circulation primes the pump of the economy, hence the "stimulus" packages of the Bush and Obama eras, and the present-day stimulus checks and loan programs offered to people and businesses alike.   Step on the gas, you accelerate.  Stomp on the brakes, you stop.

It is a fine line, though.  Printing more money may stimulate the economy, but then could cause inflation, as people realize there is more money around and thus is worth less.  Inflation ir deflation is little more than the effect of supply-and-demand on money, which is just another commodity if you think about it.

But right now, well, it just isn't an issue, so why are these right-wing nutjobs bringing this up?   Well, I think the answer is, when things are going well, it is hard to argue for change.  So you create a crises, at least in the minds of your followers, so they clamor for change.   And I am not singling out right-wing nutjobs on this account - the Leftists do this as well.

We recently saw a couple of incidents where people drove their cars through protests. What is interesting is that the protesters were white, protesting for Black Lives Matter.   These protests have gone on for months now, with no apparent end in sight.  There is no "end game" on this - no capitulation by the government, no list of demands to be met.  It is just perpetual outrage, orchestrated by a group of people, often white people.

For example, a police car was attacked by a mob of whites - who actually jumped on the hood and started denting it, and smashing out the windows with hammers.  The Police inside, fearing for their lives, drove off, with protesters on the roof.  One of them, a lily-white fellow claimed that he and another "organizer" jumped on board and that the Police car driving off was an "assault".  Organizer?  I mean, what the ever-loving fuck?  Since when do white people organize a BLM demonstration?  I mean, that's racist right there.

The point is (and I did have one) nothing has changed that dramatically in the last year, five years, or ten years, with regard to race relations.  In fact, there has been a history of steady improvement.   So why now?   Why are people freaking out now?  And why are white people getting all in front of this?

Again, the answer is, in part, that you can't effect change unless you convince people that things are so bad, you have to throw out everything and start over.   So we create a list of outrages - some based on real incidents, others exaggerated, others made from whole cloth.  And with these continual no-end-in-sight protests, you can be sure there will be more incidents, although mostly of the whole-cloth variety.

That's where this inflation paranoia comes from as well. If you listen to these folks who are indoctrinated on the right (as opposed to the left) they have a list of grievances a mile long.  No one single thing is to blame, but a collection of ills that imperil the nation - everything from Benghazi, to Hillary's e-mails, the Fed, conspiracy theories, deep state, inflation, the gold standard, and so on and so forth.

What the boring-guy-who-lives-with-mom and the "Antifart" activist jumping on police cars have in common is (besides both living with their Mothers) they are externalizing their problems.   How can I worry about getting a job and moving into my own apartment, when black people are being abused? How can I possibly get ahead in life if the Fed is "taking away all my money?"   Same shit, different Mother's basement.

The real risk, as I see it, is that we will throw away a great society and one with great potential for the future, in favor of some undefined or ill-defined change that won't solve these various problems, but likely exacerbate them.

And why?  It isn't the Blacks in Black Lives Matter who are to blame, but a bunch of bored suburban white men, who have nothing better to do that to sit all day online, filling their minds with poison and externalizing their personal problems to national issues.