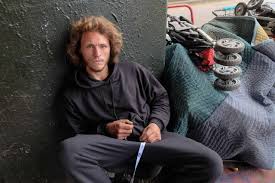 People who basically give up on life at an early age may regret doing so later on, when living gets a lot harder to do.


We stayed at a "Harvest Hosts" in Princeton, West Virginia, where they have a railroad museum.   It was in a parking lot next to the restored train station.  Although it wasn't required, I sent them a $10 donation by e-check.  It was the least I could do.  It was a pretty quiet night, other than an impromptu fireworks display by one of the neighbors.   Another couple in a Class-B van camper was nearby.

It was all pretty nice, other than a young man who clearly was homeless or living in the margins, was loitering around the railroad station, using their outlets to charge his phone.   Will Rogers once said that America is the only country where you can drive to the poorhouse.  That was back in the 1950's.  Today, it is the nation where you can be homeless and still have a Facebook page and even a YouTube channel.   Stobe the Hobo did it - until he got hit by a train.

Some of these folks are harmless enough, but have emotional issues. Others can be vicious and violent and rob, attack, or even kill you.  Problem is, they all look alike.  And the weird behavior both exhibit makes it hard to tell one from the other.   Also, folks who live on the margins are often living off others.  No doubt the fellow living at the train station is collecting some kind of assistance, maybe food stamps, and Obamaphone, or who knows?   Oh, that and the begging money.

And as a special treat we get in return, he left all his fast-food wrappers in a pile where he was sitting (yes, can't work, have no money, but can afford restaurant food - go figure).   I see this a lot, too - homeless people are not the kind who recycle, unless it is to cash in beer cans to buy more beer.  You can usually tell a homeless encampment by the mounds of trash, and usually the smell of stale urine and perhaps some fecal matter to boot.   What's not to like?

So anyway, all night long, this fellow and a couple of his homeless friends wandered around the grounds, which I guess is innocuous, but he seemed to make it a habit to walk right by our camper (and that of the other couple) and peer in the windows.   Creepy.   Maybe he has mental health issues, and doesn't understand that he is violating not only social distancing, but something called "personal space" which predates this virus.  And there seems to be a pattern to this - bums like to get right in your face, usually when panhandling, but also just in general.   Maybe they know it annoys people and this is the only power they have in life - to disturb others.  Maybe people give them money so they will just go away.

So maybe he just didn't understand what he was doing was inappropriate.   Or maybe he was casing the joint, looking for things to steal, wondering whether we were inside and if not, could he break a window and swipe something.   Well, that's how it works in San Antonio.   Go sometime - it is a lot of fun - the riverwalk, the Alamo, and of course, having your car broken into.   It is a thing there.

What was sad, to me, was that this fellow was in his late 20's at best - the prime of his life - and he was squandering his best years living down by the tracks.  Maybe he had some kind of mental health issues (highly likely) or just was a drug addict (the latter being a choice).  What was sad was that in the area were "help wanted" signs all over the place.  One hotel chain was hiring with the notation, "full-time employees wanted!" which is akin to hitting the jackpot, as usually this means you get benefits including health care.

Of course, that would involve work, but sometimes work can be fun.  You can goof around with co-workers to make the day go by, and of course there is a satisfaction in earning a paycheck, no matter how small it is.  When you work for a living, you are your own man, beholden to none - well, beholden to your boss.   But when you are a bum, it may seem like freedom, but deep down, one must realize that one is simply a social parasite.

But beyond that is the logistics of the thing.  At age 25-35 you feel great most of the time, at least physically.    After 35, it goes downhill, slowly at first, and then faster and faster.  If you are whiling away your life, waiting for it to start, by the time you get started, it may be too late.  This almost happened to me.  The lost decade of drug use - which I will never get back.

These young "Antifart" activists are doing essentially the same thing.  You can't be throwing Molotov cocktails and holding down a job - and I suspect the reason they do the former is they can't do the latter.  It seems romantic and important to protest and be part of a "movement" but in the end, these movements fizzle out, leaving you behind with nowhere to go - after everyone has left the room and asked you to turn the lights off before you leave.

My stinking hippie brother did this - living in an unheated barn in Vermont for a decade or more, strumming his guitar to end the war.  Nixon ended the war, because it was unwinnable, not because of the protests.   Most of his friends and even some of his fellow hippies moved on, got jobs, settled down, raised families.   My brother decided to do that - a decade after everyone else had.   It was a lot harder to do at that point, I suspect.   He was fortunate that he ended up in academia, where he can poison the minds of a new generation of protesters.  Others are not so fortunate.

Many others end up living in the margins the rest of their lives, bitter and angry at a "system" that seems stacked against them, but in reality, was designed to help them.   When you stack yourself against the system, it only seems like the system is stacked against you.  It is a funny thing, but people really do want to see you succeed in life - if you succeed, you are less of a burden to the rest of us, you generate and create wealth, pay into the system, and also can afford to consume.   General Motors doesn't want to see you broke and homeless - homeless people don't buy new cars.   Well, they tried giving them Pontiacs on Oprah, but that sort of backfired.   They don't make Pontiacs anymore.

People also want to see you succeed because most people are decent, believe it or not.

Things are even far worse yet for those young folks who commit criminal acts.  Right about now, many of the SDS members and other radicals who blew things up or robbed banks or whatever, are up for parole, and now in their 70's and 80's are wondering where the hell their life went.   They are remorseful, but some may end up dying in jail - and few will mourn their deaths.   The same is true for the homeless bum who starts breaking into stores and houses to get drug money.   Once you have that string of convictions and spent time in jail, well, life goes downhill pretty quickly and is very, very hard to turn around.

So yea, this homeless guy at the railroad station creeped me out, and I didn't like him because of that. Screw people like that, invading your personal space and making you feel insecure - and knowing they are doing it, too.   But on the other hand, I felt sorry for this guy, as he was young and in his prime and life has so much to offer, and here he was, bumming around (literally) a small town in West Virginia, already having given up on life.   So much promise, so much to see and do, and so many joys, both great and small - all traded in for the transitory rush of drug and alcohol abuse.

I feel sorry for him.   Well, that is, until he steals my shit.  Then just put him in the electric chair.  Compassion only goes so far.
Newer Post Older Post Home