The Danger of Fatalism 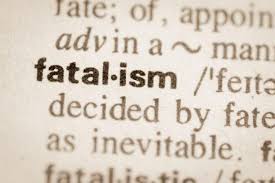 We're all going to die anyway, so why not just spend it all now?   Bad idea.


I recently glanced at an article online about fatalism.  The thrust was that people are psychologically changed by this epidemic, of which I have no doubt.   When all you hear about in the news is people getting sick and dying, it makes you think about how long you have left to live.

We went through this with the HIV epidemic.   It is a sobering thought that you might have some sort of fatal illness and have only a few months or years to live.  Getting tested back then (which took a week to get results) was a nerve-wracking experience.   Counselors were on hand when test results were given, as people were known to break down or even kill themselves if they tested positive.   After all, HIV was a death sentence.   So yea, I'm still not all that impressed with your new virus.  CoVid or whatever you want to call it, will flare out by the end of the year.   HIV has been killing people for decades now, and continues to kill.

And no, I don't believe this narrative that you can catch it again and again until you are dead.   If this was the case, we'd see hundreds, thousands, even millions of cases of people who have been re-infected, not just one or two purported cases on the nightly news, which may not have been "re-infections" such much as just infections.

But, we'll see. In a year we'll know far more than we know today, and there are two possible narratives - either we over-reacted, or we under-reacted, I think.   The honest truth is, the death rate is declining, even as the infection rate soars.   So at the very least, treatments are improving and the odds of surviving the virus are improving dramatically.

But getting back to fatalism, it can be an economic trap if you let it.   Right now, people are going nuts (in many different ways).   Those with a few dollars or a good job are buying vacation homes and RVs.   RV parks and State parks are full in many places, and sporting goods stores are selling out of tents.   People are spending money like mad, perhaps subconsciously realizing for the first time in their lives that life does not go on forever and they want to get some enjoyment out of it.

They also want to get away from crowded cities and into the fresh air of the country.  There is a precedent for this.   As I noted before, I grew up in a small town that was largely settled by people from New York and Boston who built elaborate homes on the lake (mansions, in some cases) or "Model Farms" out in the countryside (many of which are still in business today).  They would take the train up from New York or Boston in the summer and spend the summer months away from the heat, smells, and disease of the big city.   Recall that in the 1800's and early 1900's, that the city would have horse manure (and often dead horses) in the streets.  The smell was horrific, as was the heat and the flies and the air pollution.   And epidemics?   A way of life back then.

So the wealthy retired to their houses on the Hudson, or the Hamptons, Poconos, or Thousand Islands, the Jersey Shore, or perhaps a rustic cabin in the Adirondacks.  It was a tradition that continued for decades, well into the mid-century.   Vacationing in the mountains or woods or at the shore was still a thing in the 1960's - my parents would rent a cabin in Wisconsin or at Big Moose Lake.   It wasn't until the millennium that vacationing on crowded cruise ships or at crowded theme parks replaced the fresh air and country living - thanks to low-cost airfares.   Today, all of that, including the plane ride, seems like a really, really bad idea in an era of epidemic.

On our tiny little island, home sales are brisk.   Houses that have been sitting on the market for a year are selling overnight, for asking price, and the new owners are gutting them and throwing hundreds of thousands of dollars into renovating them.  Citizens of Atlanta are discovering the coast of Georgia (as has Governor Cuomo).   We wonder whether it is time for us to sell as well, but are faced with the old-time conundrum, where would we move to, then?    If someone knocks on our door and brings a wheelbarrow full of money, though, we wouldn't say no.   After all, we have a perfectly good trailer to live in!

But does this make any sense at all?   I mean, if you wanted to live on Jekyll Island before the Corona Virus struck, great.   Although you would have been better off buying such a house six months ago, before the bidding wars started.   Same is true for RVs.   If you really wanted one a few months ago, they were offering deals.   Deciding to pull the trigger on a purchase because of the virus means only you pay top dollar.  So, strategically, panic buying is never a good idea, whether it is a hoard of toilet paper, a tent you may use only once, an RV you will sell in a year, or a vacation home you may tire of in a matter of months (when the bills come due).

And I am sure there are other unnecessary or ill-conceived purchases that people are making, justifying them on the basis of "well, you're going to die anyway, might as well enjoy the ride!"  There is a modicum of truth to that, of course - we are all going to die.   But if you only realized this in the last few months, shame on you.  It is something you should be aware of all your life - as it is part and parcel of life planning.   You cannot "invest for the future" without understanding that your investment timeline is very fixed.

You see, there is the other problem to consider besides dying, and that is living too long, or more precisely, outliving your money. Getting old sucks, and I can attest to that firsthand, having experienced the early stages of it and watched my friends go through it until they wither and die.  Getting old while poor sucks even worse.

So, for example, at my stage in life, when maybe I have 20-30 years left to live (if I am lucky, and I'm not feeling lucky), "investing for the future" makes less sense than financial security.  Having no debts and cash in the bank is a better bet than being leveraged in stocks.   This is not to say we are totally in cash, only a lot more than when we were 30.

On the other hand, I see a lot of younger people deciding to "spend it all now!" and "enjoy life" rather than save for the future.   What worries me, or at least should worry them, is that they may likely need that money later in life, and the transitory pleasures of owning "things" evaporates rather quickly.   By the time you are ready to retire, the "must have" fancy car or boat or whatever is likely in the junkyard.  The trendy dress or fancy new appliance or cellphone is in the landfill.   The material is mortal error, if only because the material wears out.   On the other hand, financial independence can allow you to do things and own your own time (besides just the weekend) and really enjoy life.

Sadly, I also see a lot of these ill-conceived "FiRE" or "Retire Early" sites that give a lot of bad advice.  "Save up a million dollars and retire at age 30!" they say.   But the problem is, a million dollars ain't enough to retire on at age 60, as I can attest to personally.   Oh, we're not starving, but I surely wish my "nest egg" was bigger than it is - running out of money becomes the new money-worry when you get older.   Maybe today, you can retire on a million dollars, which using the 4% rule would yield you a $40,000 income for 30 years.

But at age 30?  It just ain't enough.   And this idea you can "retire" and live in a converted van or a school bus as some sort of "alternative lifestyle" is just foolish or perhaps a sign of mental illness.  It certainly wouldn't work out as you get older, too.

Fatalism has an attraction (sorry) that is hard to break free of.  I know myself, in my younger days, used the "you're going to die anyway, might as well enjoy yourself!" excuse to buy things that, in retrospect, were utter wastes of money.  Our last boat, for example, was far too expensive for the enjoyment we got out of it.  We should have bought a boat like our second one, which turned out to be cheap, economical, and more fun.   You can have a hobby car on a budget, but that doesn't mean spending ten times as much gives you ten times the enjoyment - as I found out firsthand.

It is possible to "treat yourself" and do it economically, which makes the treat that much more tasty.  Going to a fancy restaurant and ordering a gourmet meal is nice, cooking one yourself at home is twice as satisfying, particularly if you invite over friends to share it.   The bonus is you spent 1/4 or less than you would have at a restaurant.

Don't fall for the fatalism trap. Your own mind, right now, may be telling you to say "fuck it, let's just spend it all now!" That's the little devil on your shoulder tempting you with economic sin.   Listen to the angel instead - the one who says, "that was wrong, mister!"  - the one we don't like to listen to.
Newer Post Older Post Home