Bootstraps - What It Really Means 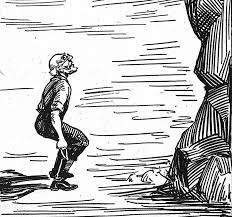 Pulling yourself up by your bootstraps is physically impossible!

Our language is pretty funny and it is weird how sayings enter the lexicon and then end meaning something else entirely.  For example, when I was a kid, they had this Art Linkletter show (and books) called, "Kids Say the Darndest Things!"   One of the "Darndest Things!" a kid said was that such-and-such a famous person was "spinning in their grave!" which was accompanied by guffaws because everyone knows that the correct phrase is "turning in their grave" and that stupid kid got it all wrong!

Well, fast-forward 50 years and it is commonplace to hear someone say so-and-so is "spinning in their grave" which I guess came from that Linkletter bit.  It has become so commonplace and I doubt anyone saying it today even realizes what it means - if it means anything at all.

Similarly, the phrase "pull yourself up by your bootstraps" has taken on the opposite meaning of what it first meant.  The phrase was originally designed to be humorous - the idea of someone levitating themselves skyward simply by pulling on the straps of their boots.  It is sort of like how Bugs Bunny survives a plane crash by jumping out of the crashing plane when it is mere feet from the ground.  That works in cartoons, not in real life.

I remember hearing the term "bootstrap" for the first time when our prep school got a brand-spanking-new PDP-11 computer and no one knew what to do with it (except me and a couple of other guys - what a shame! he-he!).   It was a big improvement over the PDP-8 we had which had "core" memory and individual "flip cards" - printed circuit boards, each of which represented a logic gate.  Imagine, an entire circuit board for one lousy XOR gate.  Today, a single chip has millions of them. And the whole damn thing was hand-wired with a wire-wrapping tool, all in yellow wire (tracing wires?  Just give up!).

The PDP-11 had a more modern configuration, including dual 8" floppy drives.  No, the alumni who donated it didn't spring for a hard drive - those were expensive (and huge!).  One drive contained the operating system and the other was for "data".  When you turned on the computer, it would "Bootstrap" from the first floppy and load the operating system.  They used the term "Bootstrap" because the computer was, in effect, programming itself by loading the O/S into memory.  Later on, that term would be shorted to "boot" as in "booting from the hard drive" or "hard drive boot."

And I suspect there are many computer geeks today who have no idea where the term "boot" came from, either - if in fact it hasn't dropped out of the lexicon already.

What is weird about "bootstrap" is that today, it is used to denigrate young people or people who have yet to (or many never) achieve success.  "Just pull yourself up by your bootstraps!" they say, as if you could levitate yourself into the air by tugging at your shoes.  Nice theory, but it doesn't work in practice.

The reality is, every successful person succeeds in life from a number of factors, luck being one of them.  Like I said, never confuse being lucky with being brilliant - it is the cause of hubris.  You make a few good decisions and lady luck comes your way and you begin to think you have a knack.  So you keep going and lose it all, because you didn't have a knack, you just got lucky.  This is how gamblers end up losing their life's savings.

This is not to say effort and knowledge don't count - they do.  But being born to a middle-class family, going to a decent school, being imbued with proper social values - those are all things that you have no control over, and if you were the beneficiary of them, then good for you - you were lucky.  But making the effort is the other half of the equation - working hard and having the intelligence to set rational goals and trying to achieve them.  Things like depression, alcoholism, and drug use can derail the best plans and destroy the best luck, as I have seen firsthand in my own life and that of friends, family members, and acquaintances.

The point is, people saying "You should pull yourself up by your bootstraps!" have no idea what the phrase actually means and are oblivious to the irony of it all.   What they are saying, in effect, is that you are not successful in life because you can't do the impossible - levitate yourself through magic.  And that's a pretty cruel thing to say, really.