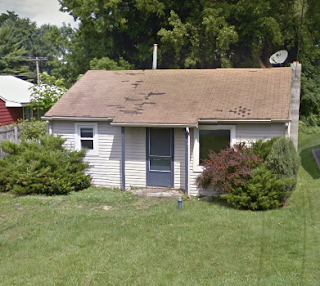 My first house I bought in 1982, using an FmHA loan - not to be confused with an FHA loan!

People say they pulled themselves up by their bootstraps, and to some extent this is true - you have to at least make an effort.  But we all receive help along the way in life, from other people and from financial institutions and the government.  And one of the hands-up I received was a Farmers Home Administration mortgage loan on my first house, pictured above (from Google Maps) which doesn't appear to have been maintained since I sold it in 1987.

I was working at Carrier at the time, making $17,000 a year as a laboratory technician and probably underpaid. I was renting at the time and it was difficult to find a place that was reasonably priced, in a safe neighborhood, and a reasonable distance from work.  My boss at work told me about a house for sale in Chittenango for $22,000 which was a lot of money at the time.  Bear in mind that interest rates in that era were double-digit so the corresponding payment was pretty high.

The Real Estate agent I talked to told me about this program through the Farmer's Home Administration - you could get a mortgage and the interest rate would be subsidized based on your income.  If you made a lot of money, there was no subsidy.  If you made nothing, well, you paid no interest at all.  There were caveats, though.  If you sold the property for a profit, you had to pay back the mortgage subsidy out of the proceeds, up to your level of profit.  You could not rent out the property, but had to occupy it as a personal residence.  Every year, you had to fill out a form listing your expenses and income so they could calculate your subsidy.

As I noted before, the government form asked me to itemize my expenses.   One line on the form was for "Entertainment" with a notation in parentheses,  "Bowling,  Cigarettes, etc."  I got a chuckle out of this, as I guess that is how the government thought we lived.  I just put down how much I spent on beer and pot.

As I recall, the monthly payment was like $250 or so, and when I went on leave-of-absence at Carrier to finish my Engineering degree, the payments dropped to $80 a month (!!) which was cheap even then (my car payment was $166 a month, I remember that!).  Of course, when I sold the house a few years later, they "recaptured" the subsidized interest to the tune of $6000 or more and I netted only $5000 from the sale (which I stupidly didn't save!).   Oddly enough, if I had paid off the mortgage, the recapture would not have applied.

There were a lot of things I did wrong there, of course.  I didn't get a roommate and cut my living expenses.  I didn't keep the place up (and apparently neither did the subsequent owners!).  When I bought it, the previous owners were a young couple. He was a woodworker and made custom "knotty pine" cabinets in the kitchen and installed a new stove and refrigerator.  He put in a new furnace, too - with ductwork (it had a floor furnace, which was poplar back in the 1950's).   FmHA insisted I put new siding on the house, new doors, and a new roof, as well as new wall-to-wall carpeting.  The cost of these repairs was folded into the mortgage.  Apparently that was last maintenance done on the house - from what I can see on Google Maps.

The house had been a "party house".  When I told some po-thead friends I bought a house, they said, "Cool!  The house with the tiger mural!"  Apparently before the previous owners lived there, there were some Deadheads occupying the joint, and they painted a huge mural of a tiger walking out of the jungle.  I never saw it, as the previous owners to me had paneled the living room.  But come to think of it, maybe in my younger days I had visited there to buy pot.

But it was a cheap place to live, and it wasn't far from work.  And when I decided to go back to school, well, it provided me with an even cheaper place to live.   The FmHA program gave me a "hand up" not a "hand-out" and because of that, in part, I am where I am today.

Is the program still in existence?  I guess so.  It only applies to rural areas, though, so you can't buy a loft in SoHo using the program.  Also, the program made a lot of sense in an era of 14% mortgage rates.  But today, even with rates going up to a whopping 4%, it makes less sense - rates today are scandalously low- but that is about to change.

But such programs exist - you just have to go looking for them or keep your wits about you.  And maybe in the future, if interest rates climb, well an FmHA loan might make sense!