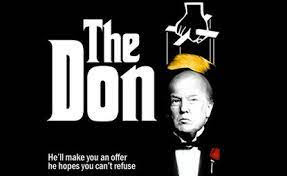 The real reason Part IV was never made...

I found an old copy of The Godfather at the local book exchange, and it was interesting to re-read this so many years later.  Mario Puzo is quite a storyteller and the book is a real page-turner.  But like with Melville, he doesn't just tell a story, he interjects some philosophy into the narrative.  Consider this paragraph which succinctly describes the paradox of police work:

Hagen understood that the policeman believes in law and order in a curiously innocent way. He believes in it more than does the public he serves. Law and order is, after all, the magic from which he derives his power, individual power which he cherishes as nearly all men cherish individual power. And yet there is always the smoldering resentment against the public he serves. They are at the same time his ward and his prey. As wards they are ungrateful, abusive and demanding. As prey they are slippery and dangerous, full of guile. As soon as one is in the policeman’s clutches the mechanism of the society the policeman defends marshals all its resources to cheat him of his prize. The fix is put in by politicians. Judges give lenient suspended sentences to the worst hoodlums. Governors of the States and the President of the United States himself give full pardons, assuming that respected lawyers have not already won his acquittal. After a time the cop learns. Why should he not collect the fees these hoodlums are paying? He needs it more. His children, why should they not go to college? Why shouldn’t his wife shop in more expensive places? Why shouldn’t he himself get the sun with a winter vacation in Florida? After all, he risks his life and that is no joke.”― Mario Puzo, The Godfather (emphasis added)

You see this all the time in ordinary people - they bitch and complain about cops giving them a speeding ticket for... speeding.  We want the Police to police the other guy, not us.  But when we break the law, we whine and complain about the unfairness of it all, and want a special exception made in our case, because we are middle-class, white, and wealthy.  And in many cases, such exceptions are made - which in turn, feeds the feeling that the whole system is "unfair."  People get the government they deserve.
This quote illustrates how The Godfather is more than just some Mafia story with people getting kneecaps broken or "swimming with the fishes."  Sadly, most Mafia movies are like that - catering to the unnecessary violence that the audience craves and pays to watch.
Of course, The Godfather is a work of fiction, and shouldn't be taken as a serious documentary of Mafia life.  But one aspect of it I found interesting - Don Corleone achieved power not through ruthlessness and murder, but by reasonableness.  His "offer you can't refuse" wasn't an implication that you would be murdered if you did not accept (although that was always in the background) but that his offer was something in your own best interest to the point where refusing would make no sense.  It was better to build up friendships than to accumulate enemies:

As a result, he built up a lot of friendships.  He had politicians in his pocket because he could get out the Italian vote for them, not because he threatened them with extortion or paid them bribes. And he could get out the Italian vote not because he threatened people in the neighborhood, but because they all owed something to him and felt an obligation of friendship to vote for the candidate he endorsed.  It also meant they would not rat him out if the Police came asking questions.
Now whether any of this is true or not, I don't know.  But it makes a lot of sense - people are motivated more by greed than fear.  You go to someone and make them an offer that will make you rich and them wealthy, they are inclined to accept it.  You make someone an offer that makes them destitute and you obscenely rich, they may fight you to the death (figuratively or literally) as you gave them nothing left to lose.
And perhaps this is where "Don Trump" failed. No doubt he had dealings with the Mafia families in New York, in terms of labor unions, garbage collection, and whatnot. And maybe he fancied himself a "made man" of sorts.  Or perhaps he spent too much time with Russian Mobsters in their Adidas track suits, whose idea of finesse was a broken kneecap.  Whatever the reason, Trump accumulated enemies all along the way, and few friends.  And the few friends he had were friends only out of fear - and willing to sell him out at a moment's notice, particularly as he was so willing to sell them out if it was convenient to him.
The Puzo method perhaps has applications in matters outside of the underworld.   You can only squeeze people so much before they figure they have nothing left to lose, and fight back.  In fact, that is what motivated Vito Corleone to become Don Corleone.  The local "Don" was squeezing him too tightly and he figured out that, like Trump, the Don was all bluster and no real power.  So he took him out - he had nothing to lose in the process.  And in doing so, he earned the gratitude of the people in his neighborhood and accumulated power - not through threats and intimidation, but through favors and friendship.
I noted before that many financial institutions have switched gears over the years.  In the old days, they tried to build up a customer relationship so as to have customers for life and build up a brand loyalty.  But today, particularly with bankruptcy reform, it is more profitable to loan someone so much money they can never pay it back and then utterly ruin them for life.   Why bother grooming a customer for return business when you can just take everything they have right away?  The problem with this model is that it chases short-term gains over long-term profits.  You ruin a customer through predatory lending and you make a lot of money right now.  But if you help a customer, you make money from them over a lifetime - and society benefits as well.  In this era of quarterly profit reports, the latter simply isn't an option, though.
People want to see you succeed in life - smart people do, anyway.  There is not much to be gained by ruining someone completely, as they are no longer a good customer and become a burden to society, not an asset.   And perhaps this is where some folks in the 1% should take note - if everyone in the country becomes destitute because you are too greedy, who will buy your $1500 smart phones, your $100,000 pickup trucks, and million-dollar  mini-mansions?  Who will stay in your luxury hotels or vacation resorts or visit your high-end restaurants?  A solid middle-class is really necessary for any civilization to survive.  And revolutions are not started by the very poor, but by the educated middle-class.
And now you know why the GOP wants to destroy education - as well as the middle-class!
Newer Post Older Post Home