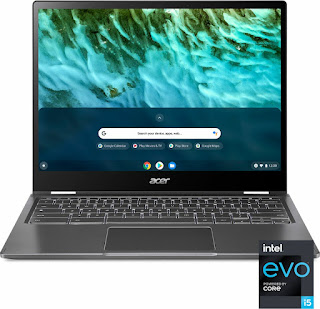 After a decade of service, my old Toshiba Satellite dies.  Or will it come back from the dead? What should I replace it with?

The other day, I was thinking to myself, "Gee, this old laptop is pretty old!  I hope it keeps running!"  And as if to answer my prayer (in a negative sense) the next morning I turned it on and got nothing but a black screen.

Fortunately, I have two identical Toshiba Satellite C655 laptops.  Over the years, I have maintained them and upgraded them to 8GB of memory (the max they will recognize) and a half terabyte hard drive (again, the max).  I spilled a martini on one of them and shorted out the lefthand CTRL key, which I "fixed" by cutting the trace to it and disabling it.  Later on, I just bought a replacement keyboard on eBay for $10.  Parts are cheap for these old machines as they are so woefully outdated.

Anyway, I pulled the hard drive from the computer and installed it in the other one and backed up the data immediately onto my two portable hard drives.  When it booted up, it gave me a message that the CMOS battery was dead during the previous boot.   I looked online and saw a lot of extensive videos on how to replace the CMOS battery - one was a half-hour long and had 15 minutes of video explaining (with cute music in the background) how to set the system clock.  Gee, that's hard!  Clickbait videos strike again!

Another text document claimed you had to take the back cover off (only 20 screws) and I later realized that you could access the CMOS battery by simply removing the keyboard (four screws).   You know, I downloaded the service manual for these things, you'd think I'd read it!   I tested the battery at it seemed fine - 3.2V.  I think the motherboard is shot.  But again, these are so old that parts are cheap.  A used motherboard with twice the clock frequency was available on eBay for $40 including shipping.  Given that I paid less than $300 for one of the machines new and less than $200 for the other used, $40 seems like a lot of money, until you realize what a new machine costs.

Nevertheless, I took this as a sign to move on from my techno-Luddite position and move into the modern age.  2010 was a 12 years ago - time to move on.  But to where?  I was never a fan of Windows 10 (these old machines run Windows 7 Ultimate just fine) and Windows 11 requires a connection to the Internet to run, or so I have read online.  Maybe time for a netbook?

I had bought an early Netbook running Android "Ice Cream Sandwich" (really?) and it was little more than a child's toy - it was even toy-sized.  But they only cost $50 or less, and for reading e-mails or surfing the Internet, it worked OK until I tried to update it and it bricked on me (lesson learned:  leave well enough alone!).   Since then, "Chromebooks" have moved on and moved up - they are rivaling conventional laptops in terms of features and power.

None of them have things like a DVD player or a hard drive.  Instead, they have volatile memory (8 GB) and then SSD (Solid State Drive) memory of 256 GB.   So, no moving parts, other than the keyboard.   We use one of the old Toshiba laptops to stream videos to our television, as our television is an older model that is programmed only for Netflix, Youtube, and Vudu.  It isn't upgradable to add more channels, so it is easier to just plug the laptop into it and use a wireless mouse and keyboard to select our shows.

So I was looking for a Chromebook with a lot of power and an HDMI output.  I searched online and all the review sites seemed to pick the Acer Spin 713 as the top pick.  Again, no Chromebook has a DVD drive and indeed, they don't support such video (no codec) but I found a place online that sells USB DVD players for $30 and there is an "app" you can download, the VLC media player, which they claim will run any format of video.

The catch, of course, is that it runs about $600 new.  I found some online from Acer direct - factory refurbished - for about $440 so I ordered one.  It does come with a two-year warranty. We'll see how well it works out.  We also use one of the old Toshiba laptops in the camper to watch videos, so the Chromebook may work out well for that, too.

Of course, this means giving up on all my "legacy" software - my WORD2000 and Quickbooks Pro 2002.  Funny how the decades fly by while you are having fun.

But on the other hand, it isn't like I am starting from scratch.  The Chromebook runs Android and this is more akin to how my phone works - even to the point of using apps instead of programs.  So it should be a familiar interface for the both of us, and perhaps easier to use as well.

In the meantime, I have my auxiliary Toshiba Satellite to type on, and the motherboard for the other one should arrive on Friday.  Maybe they'll last another decade.  I doubt it.  Or at the very least, I will get tired of dicking around with them the next time one breaks.

Three notes:  First, when I disassembled the computer, I noticed the air duct was clogged with dust (dead human skin).  They use a heat pipe to pull heat from the processor to a finned air duct with many fine passages about 1" long.  Easy to blow out and this was probably what caused the motherboard to fail (overheating).  User error!  You can be sure I vacuumed/blew out the air ducts on the other machine.

Second, when I took it apart, one of the hinge mechanisms was broken - where the hinge screwed to the case, the case had cracked and the ferrules had pulled out.  Marty's Matchbox Makeover repair to the rescue!  I built up the mounting using superglue and baking soda around the ferrules.  It went back together just fine.

Third, the Acer Spin 712 is sold in different versions - some had 256GB SSD, others only 128.  Similarly, some have 8GB RAM and others only 4GB.  If  you see one for sale cheap, check the specs!