The West Won't Lose Much to Putin 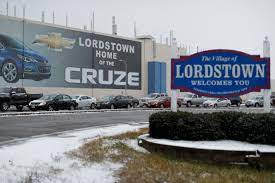 Putin threatens to confiscate airplanes and factories and businesses.  Turns out, he won't end up with much and the West won't lose much.

When I worked for GM, the union workers would justify their obscene pay raises with the mantra, "They'll never close this factory!  They have too much invested in it!"  But the reality is, any business that is losing money eventually goes bankrupt, and GM closed that factory long before it went bankrupt.  In fact, closing those money-losing plants was the last gasp of the old GM to save itself - and the union blocked GM at every turn - insisting that laid-off employees be paid not to work.

The reality is, most of these companies have little to lose in simply walking away from these "investments" in Russia - and Russia has little to gain by confiscating them.  As illustrated in recent articles, unless Russia can get certified parts for the Boeing and Airbus aircraft and have all maintenance done by certified mechanics (and have a complete paper-trail for everything) the aircraft would not be considered airworthy or insurable to fly to Western destinations, even if sanctions were lifted.   Once the aircraft is repaired using unauthorized or undocumented parts or the work is done by non-certified mechanics, well, it becomes a major hassle to meet Western airworthiness standards.  So Putin can confiscate "$10 Billion" worth of leased aircraft, but it would be like trying to shovel water - he ends up with little or nothing, other than some unsafe aircraft to fly domestically, for a few months or years until the parts run out.  He should talk to Iran about this - they went through the same nightmare.

As for the leasing companies, they likely will file an insurance claim and be made whole, although the insurance companies will take a hit.  Of course, they will be less likely to insure aircraft leased to Russia or any other nation that may "go rogue" (Hello, China?) or at the very least raise rates to correspond to risk.  So even if sanctions are lifted, Putin shoots himself and his country in the foot, as Aeroflot will have a tough time leasing new planes once the dust settles.

But bear in mind that these leasing companies have already been paid billions for these planes and may have already covered much of their costs.  So it is not clear that the leasing companies are really losing out all that much - the $10 Billion number is batted around, but everyone also says, "but the planes may be worth much less than that."   $10 Billion may represent the remaining lease payments or the retail prices of the planes.  Hard to parse.

As for factories and stores and whatnot, the losses may be even less.  You may lose your inventory of your fashion store in Moscow, but likely the store was leased and the worst you have to contemplate is being sued by the Russian landlord (good luck with that!) for terminating the lease early.  A few weeks or months of inventory isn't hard to write-off and the store fixtures, while costing a lot new, are worth nothing in resale.   Most retail stores recoup their startup and operating costs with a few years and thus most have likely made profits for their corporate owners - and they can afford to walk away at this point and still come out ahead.  Sure, they would like to have continued to make money, but they aren't losing much by walking away from the Russian market at this point.  With the crash of the Ruble, who is going to buy your products, anyway?

Even factories are not that big a deal.  A big car factory may seem like a huge investment, but the reality is, most are built on a concrete slab with a truss roof and the sides made of corrugated steel.  Pretty cheap stuff - the assembly equipment inside is worth more than the building.  And according to some sources, you can recoup the cost of tooling in as little as two years of production (otherwise, how could you maintain a 3-5 year product cycle?).  The various Western automakers already made back their investments in the Russian market.  They'll miss making more money, of course, but with Putin doing his anti-Western drumbeat, do you want to be seen driving an American or German car in Russia?  By the way, this same effect will take place, I think, in China, and buying a Buick will be seen as an act of disloyalty to the State.  GM may lose half its profit sources, but they still came out ahead in their China venture (the same could not be said for Ford).

And what does Putin gain?  Putin has said he will void international intellectual property agreements (Patents, Trademarks, Copyrights) but that isn't enough to keep the factories running. Castro nationalized the Coca-Cola factory in Havana after the revolution.  The resulting product - Castro-Cola, if you will, was described as dreck.  Communists make lousy capitalists - seems kind of obvious in retrospect.   Kleptocrats aren't much better - as the Venezuelan example illustrates.  Once the major oil companies left Venezuela, production plummeted.  You can't just ordain that production continue or increase - you have to know what you are doing.

Nevertheless, people mistakenly believe that factories or stores are major investments by companies, when in fact, they are about as durable and valuable as a disposable paper cup.  In fact, in many cases, not too many years go by until they realize it is cheaper to simply bulldoze the whole works and start over again.

When I worked at New Departure div. of GM, we had recently moved to a brand-new factory.  The old factory buildings which were designed by famous architects (which is what you did, back in the day) were three stories tall (or more) and spread out over blocks of downtown real estate.  This meant that an army of employees spent all day moving parts up and down elevators or between buildings, on city streets.  As you might imagine, this was not only inefficient, it was an invitation to theft, fraud and waste. One broken elevator could tie up production in an entire department for a day.

So the new factory - a concrete slab with a flat roof, one story, with cheap corrugated metal walls, was built.   And since the company had invested in this "new" factory, the workers felt they had the company by the balls - after all, who could afford to walk away from such an investment?  As it turns out, they couldn't afford not to and not long after I left, the factory was closed, the machinery sold off (which was happening while I was working there!) and 8,500 employees given the pink slip.  It was cheaper - far cheaper - to simply buy our bearings from outside suppliers.

It is funny, but it is human nature to think of things like buildings and structures as "permanent" when in fact, they exist for a relatively brief time on this planet.  A building may have a lifespan of 50 years or so - often less - before it is cheaper to tear it down and start over than to try to retrofit it for new uses.  In many cases, the original use of the building no longer makes sense - and the building was designed for that specific obsolete use and cannot be readily adapted to other uses.  Such is the fate of shopping malls, for example.

Putin seems to be falling into this trap, and maybe it is because he isn't astute at business.  I guess he thinks that a McDonald's building is worth a lot of money - but it really isn't.  Look how many of them are torn down and rebuilt on a regular basis (the one near our grocery store has gone through two such rebuilds in the 15 years we've lived here).  It isn't the building, or the employees, or even the burger patties.  It is taking all these things and putting them together along with an advertising campaign and brand awareness that produces the real profits.   McPutin won't have the same appeal - any more than Castro-Cola did.  But McDonald's and McPutin will both have a clown as a mascot, I guess.

Sure, McDonald's says it may lose 50 million dollars a month by closing stores in Russia. But that's in terms of lost revenue not lost profits, it doesn't take into account the profits they've already made. It's like me saying I would lose 50 billion dollars by not winning the lottery.  They are only losing potential income, not actual cash losses. Besides, how long would have been before McDonald's would have to leave Russia eventually? I mean, how many countries would Russia have to invade before McDonald's would finally call it quits or Russia would throw them out?

Of course, it may not be too late for Russia.  If the Oligarchs take over and push Putin aside (the Russian way - defenestration) and do a major mea culpa, then maybe business will go back to normal - and actually improve, as it was before the Crimea invasion.  But otherwise, it seems Putin has brought down the iron curtain once again.  Russia has devolved into an exporter of raw materials (Canada, please take note!) which is not a sustainable prosperous economy in the long run.  With a lack of foreign investment and technology, Russia will once again be reduced to primitivism.

And the recent war in Ukraine has illustrated how well home-grown Russian technology actually works.  I mean, these are the people who bought you the Lada - a half-assed remake of an obsolete Fiat.  And that's not saying much.

But Russia aside, there is much we can learn from this example.  The idea that buildings or shopping malls or restaurant chains are an inviolable part of the landscape is flawed.  These things can evaporate in a heartbeat, as they have in the past.  Yes, even major brands like Walmart or Facebook or McDonald's can end up gone, in a matter of months or years.  After all, look what happened to Kmart and Sears - they were the Walmart before there was a Walmart.

Sadly, most people don't get this.  In addition to the Union members wanting to milk our factory for all it was worth, the local officials in Connecticut wanted to tax the place to death as well.  Everyone wanted a "taste" from this perceived cash cow, even if it wasn't generating any cash.  They'll never leave, they have too much invested!  And yet, they left - and other industries followed suit.  And then the insurance industry started moving out as well.   Connecticut today is now a nightmare high-tax State with little incentive for anyone to want to start or build a business there.  The thing I can't figure out is where all the money goes - because taxes in "Red" States are often half or less that in "Blue" States.  I guess it all goes to snow removal.

On a personal level, it pays to consider this before throwing money at your own home.  We tried to fix up our house in Alexandria and had a lot of fun along the way.  But the reality was, the land was more valuable than the 60-year-old house with a bad foundation ever was.   We sold out to a developer.  Our neighbors took the plunge and threw hundreds of thousands into a remodel.  We doubled our money, they merely broke even.  And quite frankly, I suspect something similar will happen where we live now - with ordinary houses fetching close to $800,000 it may be cheaper to flatten an older home and start over than to try to fix up a plain-looking ranch house into a million-dollar mini-mansion. But we'll see.  If a developer knocks on our door again, we'll listen to what he has to say, for sure.