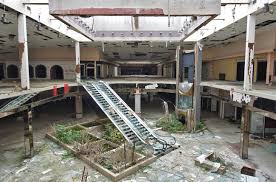 We thought these would last forever.....


When I was a kid, there were no malls.  None.  Zero.  Zilch.   My parents took me to one of the first shopping malls on the planet, near Chicago Illinois.  I remember it vividly, because everything was inside and that was just so cool.   In fact, a lot of people went just out of curiosity.   Tellingly, we didn't buy anything.   We gawked and then left.

By the mid 1970's, malls were everywhere.  And they seemed like the wave of the future - America's new downtown.   And in the frigid North, they made a lot of sense.   You could park your car, walk inside, and be warm and snow-free.   Shopping was an experience now, and you could visit your favorite department store, have lunch or even dinner, and stop by the many small gift stores and shops.

Oldsters would go there to go "Mall Walking" in a safe, secure, warm, and friendly environment.   Young teens (Mall Rats) would "hang out" until rousted by security guards.    And as a teenager, a mall was a place you went to get that first after-school job.

Malls were big.   They were expensive.  And they seemed a permanent part of the landscape.   If you told me, back in 1977, that someday the mall would be bulldozed down - in fact in about 20 years - I would have laughed in your face.   All this?   It's made of concrete!  And look at all the cars in the parking lot!   They are making money hand-over-fist here, buddy!   Next thing you'll tell me is that GM will go bankrupt!   Right, like that could happen.

Immersed in the present, we cannot see beyond our current reality.  We assume that things that have been around for a few years are now "institutions" and will last forever.   But history has shown us that this is not the case.   We thought AOL had staying power - that the online juggernaut, which had captured the lion's share of the dial-up market, would be around a long, long time as a major "media company".   They even swallowed up Time Warner.  Its day in the sun, however, was less than a decade.

What killed off the malls?   There are plenty of explanations.   This New Yorker article discusses some of the causes, but misses the point.   Shopping online didn't kill off the shopping mall - they were dead long before that.   The mall where I worked at the Olde Tyme Gaslight Restaurant was converted to a strip mall in the 1990's.   A nearby strip mall (Shoppingtown) was enclosed and converted into a mall in the early 1980's - and then remodeled back into a strip mall in the 1990's - lasting hardly a decade as an enclosed mall.

"When the Woodville Mall opened, in 1969, in Northwood, Ohio, a suburb of Toledo, its developers bragged about the mall’s million square feet of enclosed space; its anchor tenants, which included Sears and J. C. Penney; and its air-conditioning—seventy-two degrees, year-round!"

Sears?  J.C. Penney?   Houston, I think we found the problem.   Our generation, I think, is less inclined to shop in "Department Stores" in general.   And I think mid-level, middle-class- America chains like Sears and J.C. Penny in particular, are viewed as "lame" by most people today.  Both are teetering on the edge of bankruptcy.  I don't expect either to teeter for much longer.

But that's not entirely it, either.  Our shopping habits have changed over the years, and my experience since childhood spans the entire spectrum, from small town stores to online.

When I was very young, we lived in a small town, which had a downtown section with storefronts facing Main Street.   There was the druggist, a 5-and-dime, the barber shop, a shoe store, a clothing store, a store for women's "notions" (whatever those were) and a gift shop or stationary store sprinkled in here and there.   When you went shopping, you parked downtown and went from store to store to buy things from local merchants.   Prices were fairly high and selection was limited. 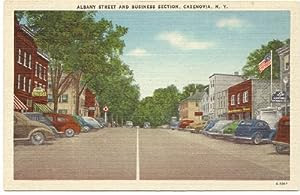 Shopping in my home town, in the old days.


But of course, this was a holdover from the pre-war days - already dying out.   We all had cars and the big city was only 20 miles away.   When Mother really wanted something special, she would drive to the big city to go to Dey Brother's Department store, or Sibley's or Chappell's (back then, each city had its own department store brands, and for some reason, they were always run by Jews.  This is not an anti-Semitic statement, just a statement of fact.)  I remember, as a fidgety kid, spending what seemed like hours in these overheated buildings that always smelled of carpet and fabric.

But the selection and prices were better than the local merchants in our small town.   And of course, the excitement of going "downtown" was great.  Mother might drop us at the movie theater (one of those great old palaces that is now a landmark) while she went shopping.   One day she surprised us by picking us up in a 1970 Fiat Spider she had just bought from the foreign car dealer.  Those were heady times.

But by the 1970's, downtowns in big cities were starting to look a little shabby.  Crime was on the rise, parking was difficult, and the hassle of driving "all the way in" to the city (with the traffic!) didn't seem worthwhile - particularly when there was not one, but two bright shiny new suburban shopping malls that were right nearby!  So the malls took off, and downtown slid into further decline.  And the small stores in my hometown found it even harder to compete.

In the 1980's we discovered a new form of shopping - the discount store.   During the recession of 1980, money was tight.  Gas was rationed, peanut butter and coffee were scarce (sounds like WW II, don't it?) and inflation was raging at 10%.   The middle-class started its slide down the economic ladder.   Discount stores like K-mart, Wal-Mart, Caldors, Ames, and the like, popped up in strip malls, often dedicated locations.  These were not in small towns.  They were not downtown.  They were not in malls.  They were in strip malls, which were cheap to build and easy to get to.  The strip mall boom started.  As I noted before, one of the local malls went from strip mall, to mall, and back to strip mall, following this trend.

Today, all of these shopping venues are gone.   The clothing store and shoe store in my hometown finally went under in the 1980's or thereabouts - no doubt victims of the malls.   All the stores on main street are restaurants now (since no one knows how to cook anymore) or gift shoppes, coffee shops, or art galleries.   It is considered an "upscale" town now, and people come there to see the old storefronts and then have a vegetarian wrap and a gourmet coffee.

The stores downtown are all boarded up.   Dey Brothers is no more.  Downtown is now a scary, depressing place to visit, where most of the buildings are boarded up, run down, and habituated by homeless people.   And the great malls of the 1970's are gone as well - either torn down or converted to strip malls.   And most of the discount stores are gone, too - wiped off the face of the earth by the colossus that has become Wal-Mart.

Wal-Mart killed the malls long before online shopping ever did.   But what really killed the malls was the decline of the middle class.   With money tight, we spend more carefully today.  And why pay extra for something, just to buy it in a fancy building?

And yes, today, we shop online more and more.  You can find whatever you want online, at prices that are very competitive (and would have been unheard of, in earlier years).  And this is a good thing.  It saves on gas, it reduces pollution, and it provides the consumer with greater selection, better prices, and thus a better life.  It isn't going to change, either.  We aren't "going back" to the old days.

And over the years, many have decried the fate of "the little man" - saying that we should "go back" to those "good old days".  In Japan, they actually had laws against discount stores.  In order to create jobs after the war, there was a byzantine distribution network of national, regional, and local wholesalers, and then neighborhood shops.  They even had "elevator ladies" in the elevators, who would push the buttons for you - all make-work jobs.  If you wanted to buy a television, you went to Mr. Nakamura's shop and bought one, at the standard retail price.  Japanese were actually flying to the United States to buy Japanese electronics, and then having them shipped back to Japan - it was that much cheaper.   But when we were there in the 1990's, discount stores were starting to open up and it was the beginning of the end for that sort of nonsense.

Of course, this sort of wasteful distribution chain still exists today in the US in the form of car dealers.   Elion Musk has tried to buck this trend by selling his Tesla cars directly to the public.  Corrupt Rust-belt States like New Jersey and Michigan have passed laws against this, but I think that is just the last, dying gasps of old-school retailing, not a retrenchment against the new ways.  Mr. Musk is on the right side of history and has a lot of momentum behind him.  His ideas will win in the end.   No one has warm and fuzzy feelings for car dealers.  No one.

We can't go back to the old days and the old ways of doing things - just as we can't go back to trollies and Zeppelins.  Nor should we want to, when self-driving electric cars are right around the corner - or who knows what.   We should move forward and respect the past, but not try to re-live it.

But the point of this posting is this:  Don't expect stasis in your life.   Things that seem permanent, like factories, shopping malls, big corporations, huge retail stores, expressways, and forms of transportation, can all go by the wayside in a real hurry - within decades, sometimes within years.   More ephemeral things like websites, can be gone in days.  Investing for the long-term can be tricky, as the long-term can turn out to be surprisingly short.

There is a statistic bandied about that of the companies making up the DJIA from 50 years ago, only a handful are around today.   This may be true, but often what happens is that companies morph and change and come back as something else - much as our local mall morphed from strip mall, to mall, and back to strip mall, with the times.  These morphings, however, can leave you with nothing - much as the GM bankruptcy did to many.

Ten or Twenty years from now, who knows what the world would be like?  Wal-Mart could be falling apart like Sears is today.   People will be communicating with built-in implants or God-knows-what.   Cars may be self-driving (although I doubt they will ever fly).  Predicting the future is an uncertain business.

The only thing you can consistently predict is that what seems permanent today, is likely to be gone - or morphed into something else - tomorrow.
Newer Post Older Post Home