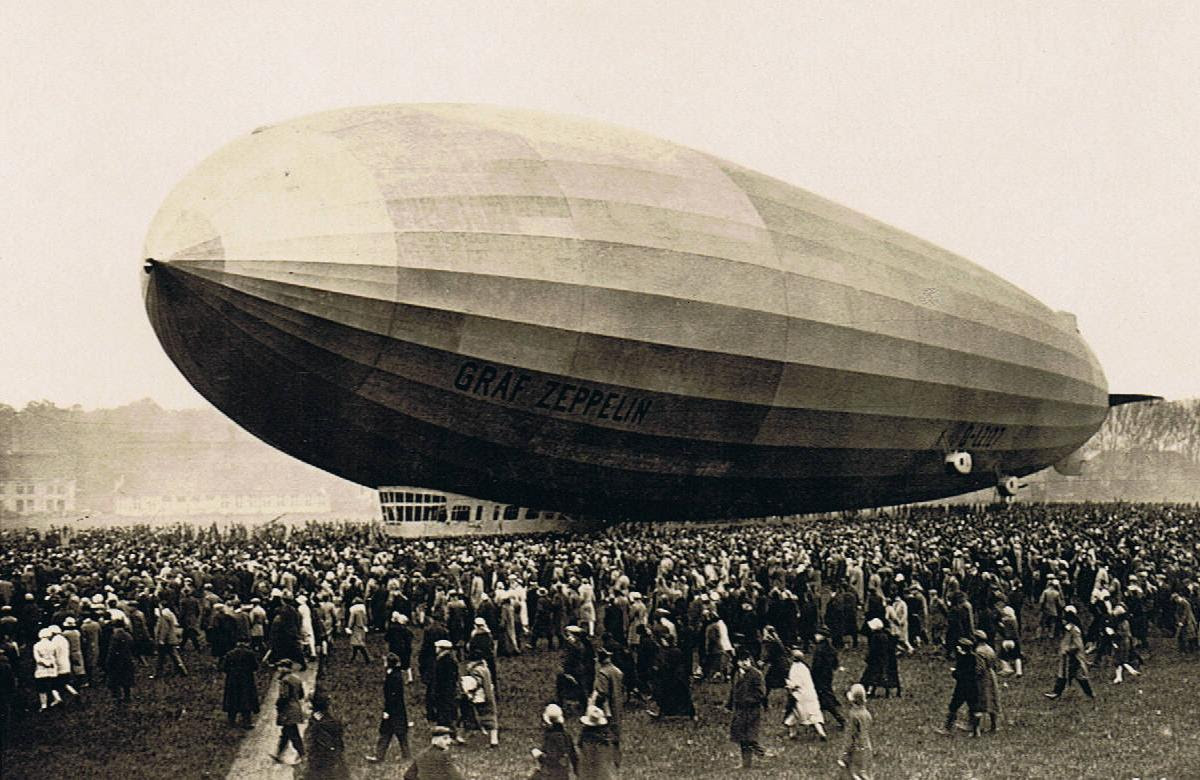 Wasting a lot of emotional energy pining for the days of trolley cars and Zeppelins is sort of a stupid waste of time.


Whenever there is a slow news day, or Popular Science wants to boost sales, they come up with one of these stupid "return of the Zeppelin" stories.  These have been as recent as 2013, but date all the way back to when I was a kid.  I'm not losing any sleep waiting for Zeppelins to come back.

Why is this?   Well, Dirigibles and other "lighter than air" craft suffer from one fundamental problem that the laws of physics dictate cannot be solved.

And the problem is this:  they are lighter than air.

This means that they must be enormous structures, very lightly built, and ready to blow away in even the slightest breeze.   Dirigibles and blimps can only fly in the best of weather.  When the wind starts to blow, well, they get blown off course, if not just plain crash.   Landings require almost a total absence of winds - which is what delayed the landing of the Hindenberg.

Dirigibles were really mostly experimental vehicles, and they really did not perform regular commercial service.   Even the most famous and reliable of the Zeppelins, the Graf Zeppelin voyaged on demonstration flights only, including one around the world.

And the Graf illustrates the other problem with "lighter than air" craft - they can't carry much load.   The Graf carried 20 passengers - and a crew of 40 (a 2:1 ratio of crew to passengers!).   Granted, today, much of the duties performed by the crew could be automated, reducing crew count.

And yes, newer materials would make dirigibles stronger and safer.   But you still can't land one in any sort of wind.   And they are still much more susceptible to storms and weather than even the flimsiest of airplanes.  And no, replacing hydrogen with helium isn't making them safer.   Hydrogen was never a major issue with Zeppelins.  The Hindenberg caught fire because it was coated with aluminized canvas.  It was one giant goddam sparkler, basically.   Hydrogen wasn't the big issue - what crashed most dirigibles (outside of wartime) was weather.

So why does the media keep hyping these Zeppelin stories?   Simple.   Click-bait.   They know you will click on a story about "the return of the Zeppelins" or buy a copy of Popular Science or whatever.   (This Wall Street Journal Article is particularly bad - as it equates the terms "Zeppelins" with "Dirigibles" and "Blimps").  People like to romanticize about these quirky old forms of transportation.

Just as they romanticize the old trolleys.  Or monorails.  Or the Tucker automobile.   Or three-wheeled cars, or whatever.

Granted, there is little harm in having fond memories of modes of transportation you've never experienced.   There is a danger, however, when some fool decides that romantic forms of transportation are great - and that taxpayers should be tapped to bring them back.   And this is what is happening in many cities across the country as trolleys or monorails or "people movers" of one sort or another are proposed - at great cost - to replace buses.

What is wrong with these forms of transportation?   Not many people use them.   I was on a trolley in Palo Alto, California, and I was the only one on it.  It went right by my friend's office, but of course they had some "valid reasons" why it was easier and more convenient to just drive, than take the "trolley" (or as they like to call it now, light rail).   They have another one in Jersey City, and when I was there, I found it faster, cheaper, and more convenient to just walk rather than take the light rail system.  You'd be surprised how far you can walk in the 15 minutes it takes to wait for a "light rail" trolley.

Why are trolleys such a bad idea?  Well you have to look at the history of them.   Before the age of steam, horse-drawn trolleys were popular in many cities.   Why trolleys and not horse-drawn wagons?   Well, the muddy or cobblestone streets of yore were a pain to haul a wagon over.   Rails provided less rolling resistance and a team of horses could pull a trolley-load of people.  That, and that alone, is why rails were used in early trolleys.

Trolleys were then electrified, as horses were expensive and polluting.   And for a couple of decades, trolleys still made sense, as they moved easily and smoothly along roads that would jar your teeth out.  But they did occupy urban roadways, and trolley accidents were not uncommon.  Ask Frieda.  But many systems lost money or started losing money.  Most were taken over by local governments, when they went bankrupt as private ventures.

But with a couple of decades, cars became commonplace and cheap - and roads improved.   People wanted to travel where they wanted to go, when they wanted to go.  My parents couldn't wait (when they were kids) to ditch the trolley and borrow Dad's Model-T to drive into town.  People are that way.   And the folks who advocate "mass transit" often are the ones who have "valid reasons" why they need to drive their Volvo into town, instead of taking the bus.

Once roads improved, trolleys made no sense - at least compared to buses.   A bus doesn't need overhead wires (which are ugly, dangerous, and a maintenance nightmare) and rails embedded in the road (ditto).    Buses can change schedules and routes as needs change - without having to tear up tracks.    Plowing snow on roads with trolley tracks, as you might imagine, could be a nightmare.

So the trolleys - which had been losing money for decades - went away and buses replaced them.   Again, the romantic types like to say  "it was all a conspiracy of the oil companies, General Motors, and Firestone!"  - and this has been repeated so often in this country that people just assume it is true.  But trolleys make no sense in cities.  The tracks take up roadway and cost an exorbitant amount of money.   Buses, while not "romantic" are just as effective and far cheaper.   If you are a proponent of mass-transit, consider that for the price of one trolley line, you could buy an entire fleet of city buses.   Which is in the best interest of "the pee-pul"?

Atlanta is putting in a trolley line - it goes from nowhere to nowhere, downtown.   I am  not sure why a trolley is better than a bus, for this application, as they do exactly the same thing - just one has a much higher cost.   When it comes to questions of Engineering - and spending other people's money - romantic notions shouldn't enter the picture.   But they do, it seems, increasingly.

(UPDATE:  The Atlanta Trolley line is a tourist attraction.  I rode it once - it was free the first year.   It goes around in a circle, connecting "historically relevant" parts of the city for tourists to visit.  It was well-attended, but like most public transit (particularly free public transit) it had its share of transit transients (read: smelly homeless people) onboard.   Once they start charging, I am not sure as many would ride it, although that would cut down on the raving lunatics on the trolley.  The Atlanta trolley is not public transit, it is an amusement-park ride for tourists.)

I am not against mass-transit.   There is place for mass-transit in all of our cities.   But it has to make financial sense.  And putting rails into existing streets really doesn't make much financial sense at all - when a bus would do the same thing, for a lot less.  And newer buses, that burn natural gas or use hybrid drives, pollute a lot less - perhaps less than "light rail" which relies on local power plant combustion.

Conspiracy theories, as I have noted before, are a dead-end, personally.  They suck up a lot of your time and energy, and leave the theorist sad, lonely, and depressed.   If you have a lot of friends who think this way (between bong hits, holding forth about the evil oil companies or whatever - while driving a monster truck as their personal transportation) I would suggest finding new friends.

Getting ahead in life is a matter of getting the right attitude first - as a start.   So long as you are mired in poor thinking, you will continue to be poor.   Going through life as a sad sack of shit, thinking that everything is awful, and if only they would bring back the Zeppelins, everything would be cool, is just, well stupid.

Because the Zeppelins aren't coming back anytime soon.   And the trolleys should probably stay in their museums.   Sadly, thanks to some wild dreamers, we will have to foot the bill on a number of these useless trolley systems, across America, in the next few decades.

I love trolleys - from an historical perspective.   But I live in reality and realize that they are no longer a practical form of transportation today.
Newer Post Older Post Home