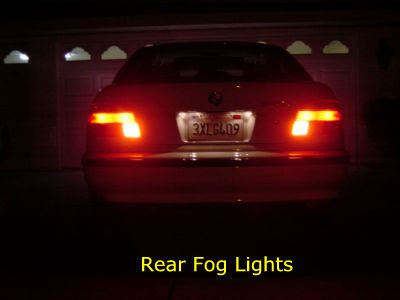 Please turn off your rear fog lights - if there is no fog out.   Please use them, in the fog!

One problem with our technological society is that people are so clueless about technology.   And by this, I don't mean they never took Calculus or understand how an integrated circuit works.   What I mean is, people can't even figure out how to turn on their televisions anymore - or know what to do when they are lost.

We can hardly drive anymore, it seems (and the government recognizes this and is funding self-driving cars as a result).  We cannot feed ourselves, other than to go through a drive-through window.   We can't manage our money.  We can't do squat.

And a lot of people not only are ignorant, they are willfully ignorant.   They view ignorance of technology as a sign of status - as if those who actually know how the world works are somehow "lower class."   It sort of smacks of the dying days of an empire, quite frankly.

One thing that sort of annoys me is fog lights, particularly rear fog lights, but also car lighting in general.  In particular, what annoys me is that so many people have no idea how to turn the lights on, in their car.   And again, automakers know this, and as a result, so many cars today have "automatic headlights" that come on and off when the car decides they are needed.   One less pesky thing to think about!

Those without automatic headlights?   Well, you understand why the government is thinking of mandating that headlights come on with the windshield wipers.   I see so many people, on dark, cloudy and foggy days, driving silver or grey cars, in the rain, with their lights off.   Headlight people fall into two groups - those who never turn their lights on until it is pitch black, and those who drive around with their lights on all the time.

By the way, driving in the dark with your lights off is a sure way to get pulled over for suspicion of DUI.

Sadly, the government stepped in again and mandated that some cars have daytime running lights (DRLs) which are not as bright as real headlights.   Some boobs drive around with their DRLs at night.  This means they have no taillights on, of course, and their instrument lights are off.   These folks are so stupid as to never look at their instruments and thus drive for miles and miles with their lights off.   No wonder cars today come with automatic headlights.

But wait, it gets worse.  Many cars have fog lights, and many folks drive around with these on all the time as well.   About the only time they don't use them is when it is foggy.

Many European cars come with rear fog lights as shown above.   These are a pair of super-bright red lights (or sometimes just one light) than can be turned on, so that people won't rear-end you in the fog.   They are a great invention, but most Americans have no clue how they work.   Many Americans have no clue their car even has these.   And as a result, they get turned on accidentally and then left on for the life of the car.

The problem is, being super-bright, they blind drivers behind you, when it is not foggy out.  It is as discourteous as driving around with your high beams on all the time.   Oh, which brings me to that.  It seems a lot of people these days think nothing of driving in city traffic with their high beams on.   They have no clue.  You flash your lights at them to get them to dim their lights, and they just don't "get" it.   They have no idea why you flashed your lights.

But that's not it - at least not all of it.   What appalls and scares me is that we live in this technological world and not only are people not equipped to deal with it, they are less equipped than 20, 30, or 40 years ago.   Back in the 1960's and 1970's, I don't recall these problems.   Granted, cars were simpler then.  But when it got towards dusk, you turned your lights on - they taught us that in driver's ed.  During the day, you turned them off.   And you didn't blind people with your high beams.   But of course, we don't have driver's ed anymore.

And maybe that is the problem - we teach self-esteem rather than knowledge.  In a recent series on National People's Radio, they discussed the Common Core teaching methods and the methods used before (and after).   I am not sure that either Common Core or other modern methods are really working.   One of the teachers interviewed said that before Common Core, they would read a section of text and then ask the students how it related to their lives (!!).  They did this to get the students "more involved" in the lesson.   How about just learning how to read?

For some reason today, we view education as icky medicine that has to be sugar-coated in order to get kids to take it.    Education is not valued for its own sake, it is rather some unpleasant thing that unwilling children must be forced to take.   And I think this attitude rubs off on kids.   If they have to try to "make reading fun!!!" then reading must be about as fun as going to the Dentist (caveat: I like going to the Dentist, but you already know that I'm weird).  So the message we teach kids is that education sucks and that it has to be gussied up to get them to swallow it.

Kids aren't dumb.  But their neural networks will learn unintended lessons if you are not careful.

So maybe that is why people growing up in our culture are phobic of learning.   And maybe that is why all the Engineers I write Patent Applications for have names like Singh, Chang, or Abdul.   Not many Smiths and Jones on high-tech Patent Applications these days.  We've taught our generation that learning is icky and that so long as they have "self-esteem" everything will turn out OK.

Well, this is a long way from fog lights.  But there is a common thread.   A disturbing thread.   We are ignorant today and celebrate ignorance.  And this does not bode well for our society.

Do me a favor.   If you have a Mercedes or a Jaguar or other European car, read the damn owner's manual (yea, reading again) and figure out if you have rear fog lights - and then figure out how to turn them on and off.

And then turn the damn things off!   Ignorance is not bliss!