How to Piss Off Religious Types 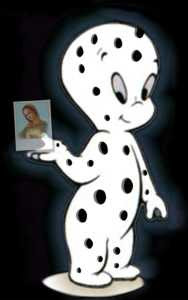 What exactly is "the Holy Ghost?" - a Ghost with holes?


When I was in Bibble school as a kid, we had these Jesus coloring books that we had to fill in.   The elderly lady who taught us was very sweet and all, but when it came to religion, she took it deadly seriously.  And I learned early on that folks have no sense of humor about religion, and don't take kindly to people asking pointed questions about things like the Parable of the Prodigal Son or the like.

It ain't just a Muslim thing - all religions will go nuts if you ever question the underlying premise of it.  Nothing is up for discussion or questioning - in any religion.   Which makes religion the antithesis of intellect.

Anyway, being a typical kid (who today would be called ADD or Asperger's or whatever - back then you were just a kid!) I was bored as hell with Bibble stories and didn't understand half of what was going on.   They just assumed you knew all this shit and didn't bother to explain any of it.

In the margin of my Jesus Coloring book, I had drawn a picture of a ghost with holes in it, and labeled it "Holey Ghost".  I showed this to my neighbor and we both started giggling.

Well, that did it.   The nice old lady who taught the course showed us her mean side.   And she got even meaner when she saw what I drew.   Sacrilege!   Apostasy!   Devil-Worshiper!   Making fun of the Holy Ghost!   This was... well beyond the pall.

Apparently she felt that God doesn't have a sense of humor.   I think he does.   If you don't believe me, look at yourself in the mirror, naked, sometime.

Of course, I couldn't just leave it alone, could I?   I asked her, "Well, what exactly IS the Holy Ghost, anyway?"

Well, that really set her off.  Asking who the Holy Ghost was!  Imagine the nerve of this kid!

She sputtered.  She hemmed.  She hawed.   She said a lot of vague things about the "Spirit of God" and so forth.

But the telling thing was, she never answered my question.

And it is funny, when I tell this story to religious types, I ask them the same question - and they can't answer it either.   In fact, if there is a group of them, they will start to argue about what exactly IS the Holy Ghost, and how it come into being.

And I discovered, over time, that a lot of people don't think there is such a thing, even religious types.   You see, there are two types of Christians out there - Trinitarians - who think that God has three parts - the Father, Son, and the mysterious "Holy Ghost".    And then there are Unitarians.

Long before they started driving Volvo wagons and becoming far-left hippies who believed in absolutely nothing, Unitarians used to be violently anti-Papist.   If you read some old Unitarian literature, well, it is kind of shocking in how intolerant it can be.   Their central premise was that there is only one God, not three, hence the name Unitarian - meaning literally "One God" - anybody who believes otherwise can go fuck themselves.

I suspect they asked the same question in Sunday School and got the same unsatisfying answer.

Quite frankly, I don't understand why the Holy Ghost was invented (and it was invented).   I mean, couldn't they leave it with just God and Jesus (and maybe throw in Mary?).   Maybe it just scanned better - "Father, Son, and Holy Ghost!" had a nice meter to it.   I don't know, really.

But I am not sure where in the Bibble the Holey Ghost comes into play.  I know he didn't part the Red Sea.   And I don't recall him (or her, or it) being involved with any of the Jesus stories.   Where exactly did the Holy Ghost come into play?   What is the significance of it?  Why does God need a stand-in?

So, one way to have a lot of fun is to ask this question with a group of people who are nominally religious, and watch what happens.   Because no two people will give the same answer, and no one will really have a satisfactory answer, either.  And before long they will get pissed off and go after each other over the issue, each convinced that their half-assed explanation is the correct one, and everyone else is blowing smoke.

It is funny that people can believe in things, and not really even understand what they are believing in!

Wikipedia is no better, by the way, offering this incomprehensible definition of the Holy Ghost, or Holy Spirit:

In other words, the Holy Ghost is the Holy Ghost - circular logic.  "He's in the Bible" - as if that explains things.   Oh, and by the way, for even asking the question, you are going to straight to Hell, mister!

So I guess they don't know either.   I guess that is one way to dodge the question - tell anyone who dares ask that they are damned eternally.

Funny how people want to believe in something just because some guy who wore a sheet and wiped his ass with his hands said it, thousands of years ago.  Apparently, people back then were smarter than we are today.   And no, that is not up for discussion!  Right?