Friends is Not a Televsion Show 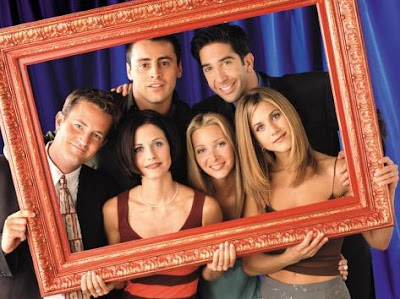 The media teaches us that the most important thing in your life is your friends.   Really?


I received an odd e-mail from what I think it is a troll, who claims he is "losing friends" because he is so cheap that he won't go out with them, as it involves spending money.   One of the activities he claims to have declined, because it was too expensive, was badminton.

Really?  Badminton?   Last time I checked, no one played that, and if they did, it was free.

But it got me to thinking about how the media (particularly so-called "social media") hypes the concept that your friends are the most important thing in your life.

And whenever the media hypes an idea, well, generally it is a bad idea for you.

First, not everyone has a circle of friends, like on the television show of the same name.   And this is OK, too.  Perfectly normal.   You are not a bad person, just because you don't squander most of your life "hanging out" with a bunch of losers in a coffee shop.   The media tells you that you should have lots of friends, and you feel bad because you don't.   That is the media's job - to make you feel bad, inadequate, and somehow less than normal.

They present body images that are unrealistic and then make you feel bad because you are overweight (like 60% of America - who are lucky enough to never worry about starving for their entire lifetimes - sounds trivial, but most of the planet doesn't have that luxury).   They want to make you feel bad about yourself because of your hair loss, or your facial shape, or your eye color - or skin color - or whatever.   They want you to feel inadequate.

Because once they have you good and depressed, well, you will end up watching an awful lot of television and end up even more friendless and withdrawn - but an excellent consumer for their take-out food and other bad bargains.   Depressed people make excellent consumers.

And sadly, women are often the target of these messages - or they tend to be more receptive to them.

That was television.   Today, we have social media to make you feel even more inadequate.   Your typical young person today may have dozens of Facebook "friends" who of course, are not really friends, but just people you linked to on a website.   Some kids literally have hundreds of friends, which becomes problematic, as the Facebook "feed" gets jammed with postings.   And we can't have that, can we?  It would drown out all the advertisements for new and interesting products.   So Facebook keeps tweaking how it works, to selectively edit your feed, creating a sense of social networking seasickness, as you never know whether someone got your posting or not.

To begin with, friends can be toxic - often literally - and in a number of ways.   I wrote before about the friend with the perpetual problem as well as the need friend who asks why you never call.   And then there are friends with drug problems, alcohol problems, hoarding problems, and mental health issues.   And then there are the "pretend friends" who will pretend to be your friend, so long as they can use you.  And as cruel as it might sound, you are best off just leaving such friends behind.   You have to take care of yourself before taking care of others - it is part of the unwritten social contract.  It is not "selfish" to get out of the car before your friend drives it off a cliff.

Just look at all the hyperlinks in the last paragraph.  I guess I have written about this before, haven't I?  I guess I thought it was kind of important.   And it is, because getting your financial house in order starts with getting your own head in order - conserving your own emotional energy for your own use.   When your life is one crises after another, or spent with friends squandering money and doing drugs (or worse yet, shopping!), then it is really, really hard to get ahead.

If you feel you have to 'hang out' with the girls at work and go to Starbucks twice a day and drop $10 a day (including tips) on a 590-calorie "coffee drink" then you will never get ahead in life.   You will end up broke, fat, and those "friends" of yours will mock you, behind your back - or even in front of you.  And yes, I know folks that do this (or did this) and it adds up over time, to a lot of lost money, a lot of lost time, and not really a lot of fun with people who really aren't your friends.

Sadly, thanks to the television, people today believe that being a "friend" means saying the most horrible things in the world to you, right to your face.   After all, that is how it was done on the sit-coms, right?   Put-down humor was the staple of sitcoms (whether it was Sanford and Son or Will and Grace).   And many people get their normative cues from television.   I don't know how many of my "friends" play this game - put-down humor - almost all night long.   Yea, I guess it is kind of funny, trading insults and all, but it gets lame after a while.   What ever happened to being kind to one another?

Sadly, this trend has gotten worse.   So-called "reality television" has taught people that it is normal to carp behind your friend's back about what horrible rotten people they are.   All the reality shows do this, without exception.   The other thing they do is stage these fake fights, where people throw things at each other (for the men's shows, wrenches, for the women's shows, kitchen utensils) and get into shouting matches.   People today, fed these normative cues think this is normal behavior.  When you hang out with "friends" today, the major activity it seems (other than obsessively texting) is to make snarky comments about whoever just left the room.

But probably the worst thing about having a circle of "friends" is that it can prevent you from finding a spouse.   At the end of the television show "Friends" they all got married (apparently, I never followed it closely).   In real life, this rarely happens this way.  Why?  Because a marriage is a one-on-one relationship, not a group thing (unless you are Mormon) and trying to "hang out" with "friends" and have a one-on-one relationship at the same time can be problematic.   The friends will either overtly or covertly sabotage the relationship - they don't want you leaving the club, of course, and they are also jealous.   And it is hard to build a relationship (and maintain it) and also have these social obligations.

When a dude gets married, so the saying goes, the first thing his wife does, is making him drop his old drinking buddies.  Smart wife.   You see, you can't be married and also hang out in bars cashing your paycheck.  I had an in-law do that, and it was a total asshole move.   You have a wife now - and perhaps children.  The party-boy days have to end.   And of course, the party-boys will have none of that - and often sabotage a marriage, particularly if the husband is weak-minded.

For women, it is the same way.  Hanging out with a gaggle of women friends all the time is one sure way to divorce.   And never, ever, EVER take relationship advice from your girlfriends.   No problem, to them, is too trivial where divorce is not the answer.  If you have marriage problems, work them out with your spouse, not your girlfriends.

But sadly, a lot of people never achieve that one-on-one relationship with another human being.   They live as strangers together in the same house.  He has his golf buddies, and she has her sewing circle.  Their lives intersect for a few waking hours a day, until one day they wake up and realize they are strangers.   It is sad.

Social engagements can be detrimental to any relationship.   You have to have a lot of one-on-one time together, even if it is just sitting quietly reading books or napping.   Constant social contacts with "friends" can be emotionally draining and stressful - and lead to martial arguments.    Putting "social life" at the top of your hierarchy is a sure recipe for disaster.  Socializing is fun and all, but it is also shallow, boring, and really a waste of time.   Like anything else - moderation.

And moderation also is one way to preserve friendship.   When I was a 20-something, I used to hang out with my beer-drinking (and drug using) buddies, almost every day after work.   It is the kid mentality- if birthday cake is good, why not eat it every day?   But repetition doesn't make things better  - only worse.  When you do the same thing over and over again, it doesn't enhance the experience.  Pretty soon, even birthday cakes tastes mundane.   It is better to have less contact with friends, and make the friendship last longer, than be 'in your face' all the time and burnout.

I know some folks - friends actually - who spend their entire lives in a social whirlwind.   They are either throwing a party or going to a party at someone else's house.   They go out to dinner several nights a week, in groups of six, eight, ten or twelve (the waitress is always happy to see that! Not!).   And I get a lot of invites, and have to respectfully decline most of them.   And it's OK to decline a social invitation, too.   You may not feel you can afford to eat out that much, or that you need the mental stress of having to deal with a group of people.  Or you may not want to drink a much as they do (and it is very hard, to go to a party and remain sober!).   Whatever the reason, if you don't feel comfortable, it is OK to decline.

And if they hate you for that, well, they weren't your friends anyway.  And you're not the kind of person who desperately needs friends, right?   Right?   Let's hope so, anyway.   Because like in any negotiation, when you decide you "desperately need something" you give up all leverage in the negotiation.  When you tell the car salesman that you desperately want a Camaro, well, he has you by the nuts.

Yes, friendship is a business transaction, in a sense.   You hear all the time from people how they feel use and abused by friends.   And when you say, "find new friends" they freak out.   After all, friendship is everything, right?   And right there is the problem.   Once your "friends" know you are desperate for friendship, they will walk all over you.   It is no different than the Camaro.

Stop obsessing about friends.   Be kind to yourself.   Get your own act together.   Because - funny thing - when you have your own shit together, you will find that people are drawn to you.
Newer Post Older Post Home