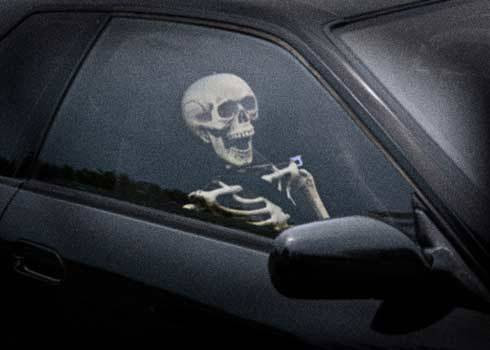 There are no dead-end roads with abandoned cars full of skeletons of people who got "lost".


Living in a tourist area can be nice, but also frustrating.   When people go on vacation, they seem to leave their brains at home.

We live on an island that is seven miles long.  You can walk around it, and indeed some people do this daily.   There is basically one road, and it is a long loop.   You are never more than five minutes from any other point on the island, even though the speed limit is 35 mph.  You basically can't get lost, even if you tried to.

But it is funny, people are paranoid about "getting lost" on our island.   You don't want to go down that road, mister!   You'll end up at that dead end, never able to turn around, and be stuck with all the other lost tourists!  There is a host of cars down there, full of skeletons of tourists who "got lost" and could never, ever return!

Yea, right.  That could happen.

For some reason, people are paranoid about "getting lost" in a place where you can't get lost.  They are paranoid about even being inconvenienced by taking the long way around.  After all, you might actually see something interesting, right?

I have met people who have been to our island, and their only experience was going to the shopping center and buying beer and then going to the beach.   When I asked them what they thought of the historic district, they gave me blank look.   It takes less than a half-hour to circumnavigate the entire island, but for some reason, curiosity never got the better of them.   Funny how timid people are.


Here is a tour of every road on the island, in nine minutes flat.

I mean, that had to be it.  What does stopping in the middle of the road and staring off into space accomplish?  Nothing!

Jamming on your brakes every ten feet is also another viable alternative, if you are lost.   Again, you are sure to be rear-ended, and when the policeman arrives to fill out the accident report, you can ask him for directions.   This must be a viable option as so many people seem to practice it.

Yes, I am being sarcastic.  The sarcasm light is ON.

But I see this not just on our island, but all across America.   Americans are so paranoid of getting lost (and taking that wrong exit to Martin Luther King Boulevard) that they drive horrifically.  They jam on their brakes.  They drive 20 mph under the speed limit.  They wander all over the road.  They back up on the Interstate.  They swerve across five lanes of traffic to make an exit.   Risking their lives, basically, to avoid getting "lost".

There is another alternative, I think.

First, don't panic.  There are no cars full of skeletons.  And unless you are in South Central LA on the day of the Rodney King verdict, the folks on MLK, Jr. Boulevard are not going to steal your hubcaps.  You are not going to die, just because you got lost.

Second, get off the road.   If you are on the Interstate, then take an exit (do NOT pull over to the side of the road unless your car is broken down!).   And for God's sake, don't try to back up to the previous exit.   We've seen it all, unfortunately.

Third, read a map.  Get off the road and into a parking lot.   Good time to get gas.   Relax.  Gas stations have maps, you know.   Then take your time, take a restroom break, and then figure out where you are and then map out your course.   Consider getting a GPS.

What NOT to do?  Stopping in the middle of the road - creating a traffic hazard.  Try to read a map while driving.   Slowing way down and jamming on the brakes (how on earth does this get you un-lost?).

But you know, sometimes, it is nice to just keep going.   You may not get to where you wanted to go as fast as you wanted to, but you might end up seeing something really interesting.   In our travels by RV, some of the best experiences can be had this way - just finding things by accident, after we took a "wrong turn."

You know, the journey is more interesting than the destination.  Yet so many rush through life wanting to "get there!" in as little time as possible, never stopping to enjoy the moment.

Just keep driving - look at the scenery.  You'll get there - and you may find the trip more enjoyable as a result.

Another alternative is to just park the car and take your bicycle....