Why Cruz is wrong. 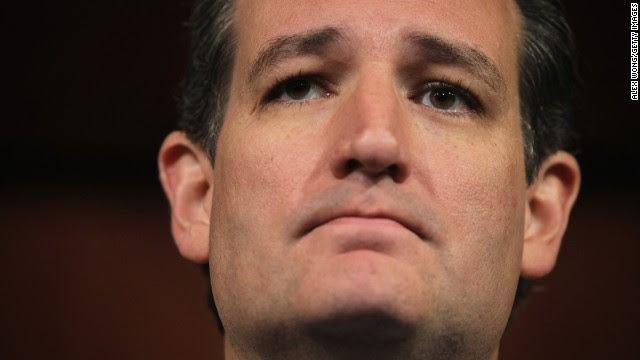 I'm still waiting to see his birth certificate.   Apparently being born in Canada is OK, but not being born in Kenya disqualifies you for the Presidency.


Ted Cruz should go back to Canada.   He really doesn't understand American Politics.   He claims that the reason Bob Dole, John McCain and Mitt Romney lost their Presidential bids, was that they weren't "conservative enough" - and as a result, the conservative voters "stayed home" and didn't vote.

The reason the GOP took as many seats in the House, the Senate, and the Governor's mansions across the USA this week wasn't because they nominated a lot of tea party conservatives for election.   Rather, the opposite was true.   The GOP, flexing its big-money, made sure that the candidates this time around were more mainstream - and nominated very middle-of-the-road (by GOP standards) candidates, including minorities and women.   And not surprisingly, they got elected.

Sadly, Cruz's delusion is also present in the Democratic party (note:  Not "Democrat Party").   Many on the far left think that when the Democrats lose an election, it is because they were "not liberal enough" and thus chalk up defeats to liberal voters "staying home" and not voting.

The majority of Americans - the vast majority - are middle-of-the-road types, and most are independent voters.  They do not march in lock-step with orders from party higher-ups.   They think for themselves.   And what scares them are right-wing nutjobs like Sarah Palin (or Ted Cruz, for that matter) and left-wing nutjobs like George McGovern.   Well, maybe he wasn't a nutjob, but he was too far to the left for America's taste.

McCain went down in flames because mainstream America though he lost his mind in nominating Sarah Palin as VP.   Romney didn't lose because the right-wing voters "stayed home" but because the mainstream voters thought he was too far to the right.   And Bob Dole simply lost to a popular President (Clinton) in an election held during good economic times.   It helped Clinton, of course, that Ross Perot siphoned off some of the vote.

Third party candidates often end up doing that - causing the party on their side of the political spectrum to lose.   You can argue all day long on both sides of the argument, whether the vote count (or recount) or Supreme Court decision was "fair" or not.   The bottom line is, if Nader wasn't in the race, those votes would have gone to Gore and he would have been President.

Third party candidates end up as spoilers, nothing more.

So, Senator Cruz, I have a suggestion for you.   If you don't get the Republican nomination for President (and gee, that is quite likely to happen), why not run as an independent?

I for one think it is a swell idea!