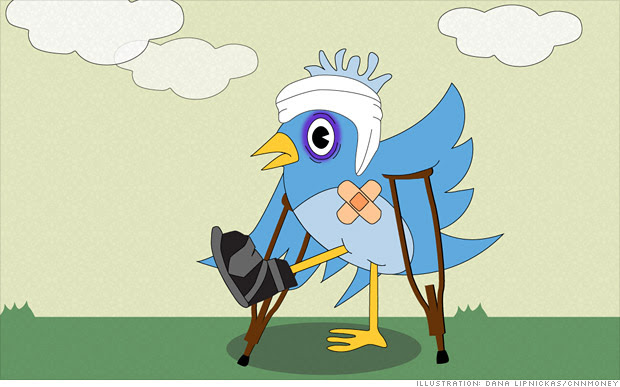 Junk means Junk - as we learned in the 1980's from Michael Milliken.


Twitter was recently awarded "Junk Bond" status for its long-term debt, as Standard and Poors believes the company may have a hard time paying off its debts in the long-term.

Now, if you have a hard time understanding what "Junk Bond" means, I can't help you. Junk means junk.  Crap.  Garbage.  Shit.  Utter trash.  Which part don't you understand?  I'll explain it again.   You want to invest in junk?  OK, but you can't complain or ask for a Federal bailout when it all goes horribly wrong.

Junk bonds are risky - and as a result have a very high yield.   High that is, if they are ever paid off.   You can lose your entire investment.

Twitter has been desperate to expand.  They've hire celebrities to "tweet" on their site and post nude pictures of themselves in a desperate attempt to get people to switch from Facebook.   Apparently it isn't working.

Even with a customer base of over 250 million people, they are losing money.

If you go to the NASDAQ site for information about Twitter stock, you are treated to colorful bar charts showing "target prices" and "buy" recommendations for the stock.   But when it comes to P/E ratios and Earnings Per Share (EPS) the NASDAQ coquettishly says "no data" rather than tell you the real truth.

As I have noted before, getting investment advice from the media is risky.   Analysts will come on the television and shout "BUY!" or "SELL!" or say idiotic things like, "Well, Jim, my target price for Twitter is $50 a share!" - but they don't explain how the came up with that number (pulled from their ass) and why such a "target" makes sense. And yes, analysts have been known in the past to be paid by companies to hype their stocks.  Yet a surprising number of people listen to these boobs and think, "Gee, I'd better get in on this hot stock tip!  After all, only me and a few million people who watched his show even know about this!"

Ignore things like buy or sell recommendations, or "target prices" - they are largely meaningless.  If you really want to understand how a company is doing, you have to dig through a lot of numbers.  And odds are, you don't have the time, access, and resources to really do this, so stay away from stock picking - at least as a major component of your portfolio.

Other sites are more to the point and provide better information.  Twitter has a P/E ratio of -12.48.   This is the ratio of share price to earnings.  And yes, a negative number means there are no earning - only losses.   According to another NASDAQ site, the company is losing about a buck per share, every year.  That's pretty astounding.  For every share of the company (presently valued at about $40) the company is losing a dollar.  How long can a company hemorrhage cash like this?

The company is losing $645.32M a year, which means that every user of the service costs them about $2.50.  Their revenue is about $664.89M per year, which means they are spending almost twice what they are making, every year.   And please, you do know the difference between "revenue" and "profit", right?  CNN doesn't!

Can they dig themselves out of a hole like this?   Only if profits double - and then some.  And that still doesn't address paying back all that debt!

The Junk Bonds in question relate to a September offering of $1.8 Billion in debt, which now gives them $3.6 Billion in cash reserves.   At the current loss rates, they have enough cash to stick around for about six or seven more years - at current levels.   But these debts are not being used to invest in capital equipment or do anything that could generate more money in the future, but rather just to cover daily operating expenses.   In six years, the Twitter fad may have peaked.

Or in six years, they found a way to double the user base, or double their ad revenue, or cut their operating expenses - or a combination of the three.   That might happen.   Or some other website will come along and be the new trendy thing to do and Twitter will go away.  Which one will happen?  Standard and Poors obviously thinks the latter scenario is quite possible.

No one ever talks about how a Tweet saved someone's life or how a man trapped in a burning building summoned help using Twitter.  All we hear about is sex scandals and politicians putting their foot in their mouths.
_______________________

Twitter is obviously a popular site - at least the news media loves it.   We hear all the time about tweets and such (usually when something awful happens as the result of it).   In fact, it seems no good ever comes of Twitter.   No one ever talks about how a Tweet saved someone's life or how a man trapped in a burning building summoned help using Twitter.  All we hear about is sex scandals and politicians putting their foot in their mouths.  Considering how dangerous Twitter can be to your reputation, I am surprised anyone uses it.

Of course, you could say that about all social media or even the Internet in general.   Teenagers committing horrendous crimes (or even innocuous ones) and then posting the results on Facebook.  Of course, they get caught.  Bullying of vulnerable teenaged girls by mean-spirited cheerleaders.  Or just the background narcissism of it all.   That sort of thing.   Not a lot good comes of it - but an awful lot of bad.

But the problem for Twitter is of course, profitability.   And that is the nut to crack for all internet sites.   If people don't pay for the site, then they have to advertise.  And when you advertise, you drive away the users, which in turn decreases your ad rates and drives away advertisers.   The advertiser destroys the medium he advertises in.   Doesn't matter if it is FM radio, Television, or Billboards.   People get sick and tired of saturation advertisement and then look away.  It is a fine line to walk.

People fled to premium channels and viewership dropped.  People started watching television on the Internet - but of course, that is being co-opted by commercials now, too.

FM Radio went through the same phase.   When I was a kid, we listened to the only rock station in our market - WOUR in faraway Utica, New York.  The signal barely came in, and the few ads were for rock shows, head shops, and maybe a car dealer.   Within a few years, there were dozens of such stations, and each blaring tons of ads between "commercial-free" sets of four songs (the same old songs, too!).   We stopped listening in droves.

Today, FM stations are owned by huge chains who desperately change formats on a weekly basis, it seems.  They keep trying to connect with listeners, wondering why-oh-why we don't like their stinky product.   It is easier to listen to music on your phone or ipod or computer or whatever.

Twitter faces the same problem - if it wants to make money, it has to figure out a way to advertise - in 140 characters or less!    If the twits on Twitter start to feel their "feed" (feed is something you give to cattle, by the way) is clogged up with ads, they will turn away as well.   It is tricky!

Does this mean Twitter will go bankrupt?   Perhaps.   The company clearly has to keep borrowing money if it wants to stay in business.   The operating expenses of the company are paid-for with borrowed cash.  This means they either need to increase income or cut costs - or do both.


"In July 2009, some of Twitter's revenue and user growth documents were published on TechCrunch after being illegally obtained by Hacker Croll. The documents projected 2009 revenues of US$400,000 in the third quarter and US$4 million in the fourth quarter along with 25 million users by the end of the year. The projections for the end of 2013 were US$1.54 billion in revenue, US$111 million in net earnings, and 1 billion users. No information about how Twitter planned to achieve those numbers was published. In response, Twitter co-founder Biz Stone published a blog post suggesting the possibility of legal action against the hacker." (emphasis added)

As you can see, they fell far short of this, with only one quarter the users (about 250,000), one third the revenue (about $650 million) and instead of a $111 million profit, a nearly $650 loss.  (Note how the Wikipedia article is long on "revenues" and short on "profits".  Again, your average plebe thinks that revenues are profits and not merely gross income).

One would think that a site like Twitter, once established, would be pretty cheap to maintain.   Does it really take a Billion dollars a year to run a website?   Sadly, this often is the case, as companies like this hire armies of programmers and marketing types to try to "tweak" the product to keep it "fresh" and "current".   Of course, these sort of "updates" tend to piss off some users (like me) who drift away after the user interface is re-done for the umpteenth time.  And those programmers and marketing types all demand high salaries.

Six years from now Twitter could be a profitable website.  (Twitter thought this would have happened in 2013).   Or, the fad may have died out by then, and people will have moved on to "the next big thing."  In fact there have been so many "next big things" touted since Twitter hit the ground.  Pinterest was one, Snapchat another.   Remember Groupon?   These websites seem to peak and valley and then evaporate altogether.

Things change quickly in this business.

So what's the point of all this?   Tech stocks and Internet stocks - as well as the bonds for the associated companies - can often be a risky bet.   Internet stocks in particular are dubious, as what seems so permanent and solid one moment, can disappear overnight, when new technologies, new trends, new styles or even just new attitudes take hold.

Myself, I tend to think that if Twitter can't make money at this after five years, I am not going to loan them money to see if they can make it in another five.  The only thing they have to pay back these debts is, well, more debt.
Newer Post Older Post Home