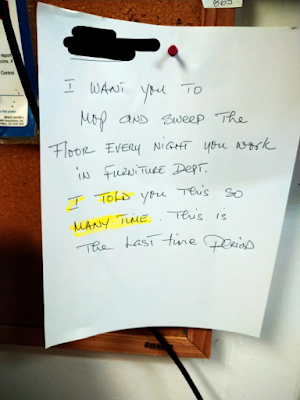 I wrote before about the popcorn memo war and how managing-by-memo is a bad idea.  If, as a manger, you have a problem with one or more employees, you look them in the eye and talk about it.  Leaving notes or memos is just passive-aggressive and no one respects that.

It also leaves a paper trail and odds are, someone will take a photo of your memo or note and post it on the Internet, where you will be mocked.

Such notes and memos are ineffective on a number of levels.  Particularly if you put "this is the last time I remind you!" or some other ultimatum and then not follow through - they've called your bluff and you are toast.  Nothing  you say will have much impact anymore.

Not only that, it creates a bad vibe among employees - and customers, if they see the signs.  I was at a restaurant the other day and there was a sign in the restroom, "No smoking or vaping in the restroom!  If you work here and I catch you vaping I WILL confiscate your vaping device!"  What was worse, was the sign was posted by the bar as well.  Now bear in mind that this restaurant has like maybe six employees total - you can't go talk to them individually or before each shift starts?  It just reeks of shitty, ineffective management.  I bet he shouts a lot, too.

Memos are no better and perhaps worse.  When you manage-by-memo you are admitting to everyone who receives the memo that you are a weak and ineffective manager who tries to avoid confrontation.  You are, in effect, hiding behind the keyboard.  It is like trolling the Internet.  Again, it leaves a bad vibe with the other employees (who feel, rightfully so, that they are being castigated for something they didn't do).  Got a problem with an employee?  Talk to them about it.  Don't broadcast your issue to the world.

In that regard, memos and signs can cause a lot of grief.  There have been reports of people writing memos, or putting up signs, or publishing in the employment agreement - or even sending a text or e-mail - saying "It is against company rules to discuss your pay with others!  You will be terminated if caught discussing pay!"

Problem is, that is illegal as hell.  So now you just handed your "problem employee" a written confirmation that you have violated the law.   It is so much better to just talk to people face-to-face, and not only that, more effective as well.  Oh, and you don't leave a paper trail.

Written communication can be misunderstood.  We've all had the situation where we responded to a text or e-mail or Facebook posting or Tweet or whatever with what we thought were witty comments or something friendly - only to be perceived the wrong way.  The recipient of the message is insulted!  How dare you make light of my grandma dying!  And then a flame war erupts.

If you work at a place where they manage-by-memo or taped-up sign, think about moving on.  Odds are, they will eventually make a sign or memo directed at you, and it won't be pleasant.  In the meantime, you will labor under this litany of post-it notes and written warnings, and it will just suck. So cut to the chase and find a place to work where the boss will at least look you in the eye and say, "You were late for work.... again!" instead of posting some half-assed sign by the time clock.