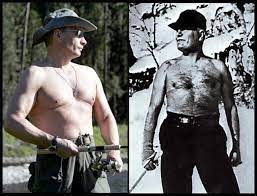 Hitler was able to invade and conquer most of Europe, at least for a time.  Mussolini was only able to bomb a defenseless African country into submission.  One was strong, the other weak.  Both were misguided and evil.  Putin isn't Hitler - He's Mussolini!  By the way, both of these guys are about as "buff" as William Shatner was on Star Trek, which is to say, "keep your shirt on, please!"

The war drags on and the first casualty in any war, is the truth.  It is hard to understand what is going on right now.  The Russians say losses are minimal and the war is almost won.  The Ukrainians claim over 10,000 Russian dead and the offensive bogging down (quite literally, in bogs).  US Intelligence is somewhere between the two, leaning more toward the Ukrainian version.

In the modern era, wars of conquest haven't gone well.  Putin has made a lot of noise about how the US is "just as bad" as he is (he admits to being bad?) by invading Iraq and Afghanistan.  Point well taken Vlad.  Say, what happened to those invasions?  Oh, right, we spent two decades, trillions of dollars, killed an awful lot of people, and accomplished nothing.  In fact, it was worse than nothing, as our enemies are now emboldened and in fact, in power.  The Iranians hold sway in Iraq and the Taliban has taken over Afghanistan.

And Putin should know this, as his country invaded Afghanistan before us and suffered the same fate.  So when he says "Well you did the same thing!" well, duh.  And how did that work out and how will it work out for you?  Why will it be different this time?   Answer:  It won't.  Even if Putin "wins" in Ukraine, there will be an insurgency going on for years until the Russians get tired and call it quits.  Sanctions against Russian will continue indefinitely until their economy collapses - as it did after they lost in Afghanistan.

This will not end well for anyone.

Short of killing every single person in a country there is really no way to "take over" another land militarily.  Even if you "win" the results are fleeting - the 1000-year Reich lasted a decade or so.  The Soviet Union, barely a century (the postwar version, 50 years) - these are blips on the radar in terms of human history.

But in terms of world warmongers, Putin is more akin to Mussolini than Hitler and I'm not the first person to make this connection.  Hitler had a well-tuned war machine and a legion of rabid followers.  He had the best generals, the best weapons, and the best strategies - at least early on.  Mussolini, on the other hand, did not have nearly as big an army, not nearly as many planes, tanks, and other weapons, and didn't really have much in the way of military success other than bombing Ethiopia to smithereens, which was easy to do as the country was largely undefended.   Mussolini's military machine, such as it was, quickly fell apart under stress.  He was the first of the axis powers to surrender, or actually run away.

Mussolini fostered a cult of personality but also one of machismo. He liked to appear shirtless and bragged of his fitness. Hitler, on the other hand, was small, frail, and hardly an Übermensch. He never appeared in public with his shirt off or bragged of his physical prowess.  He didn't have to.  While all dictators are compensating for something, either with vanity-fanning rallies or grand architecture or big military parades (like Trump desperately wanted), not all tie in their need for power with their physical abilities.  To me, it is more a sign of weakness than strength.
But there are other parallels.  Putin reminds me of Saddam Hussein, particularly his statements (and that of his proxies) leading up to the Gulf war.  You may recall at the time, we used the pretext of "yellow cake uranium" and "weapons of mass destruction" to start the war (much as Putin used "denazification" as his justification for the Ukraine war - both blatantly false).   Saddam Hussein, rather than argue this and profess his innocence, made bold pronouncements about how Americans would be wiped out in droves if they attacked Iraq.   It was sort of like Khrushchev's promise "We will bury you!" at the UN.  That never happened.  We buried Khrushchev, though.  Each statement by Hussein pushed him further and further into a corner.  He sounded like a scared child trying to talk big to intimidate an opponent.  But it wasn't convincing.
By all accounts, Russia has thrown everything they have against Ukraine, other than biological or nuclear weapons - which is everyone's concern.  By the way, people rightfully ask why the Ukraine invasion gets so much attention while military actions in Somalia and Yemen and Myanmar go unnoticed.  It is not that those wars are unimportant or that they only involve "people of color" - it is just that the threat of nuclear annihilation isn't on the table there.  The Ukraine invasion is right on Europe's doorstep, and it would be all-too-easy for this conflict to devolve into a World War.   And yea, it is also because we don't care about brown people killing each other - as much.  Not nearly as much.
I am writing this a few days before publishing it.  So when it is published, the war could be over, either way, or entering a new phase.  I think no matter what happens, it is obvious we can't go back to "business as usual" with Russia, as they would be emboldened to either try again, or if they "won" over Ukraine, set their sights on the next former Communist bloc country to invade.  It would never end, which is why the West went after Hitler after he invaded Poland - the writing was on the wall.
But I don't think the analogy to Hitler goes further than that.  Putin is trying to rally the Russian people through propaganda, but is starting too late.  There are a hard core of Putin followers, but I suspect they will become disillusioned with him as economic conditions in Russia deteriorate.  In his biography, Inside the Third Reich, Albert Speer, Hitler's architect and later minister of war production, noted he was shocked to see that up until late in the war, Hitler was diverting resources away from armament production in order to satisfy the needs of German consumers.  Chemicals needed for making weapons were being used to make cosmetics.  Hitler realized his support among the German people wasn't deep, and if they were deprived of everyday luxuries and necessities, their support for the war would wane.  It was only when the war was lost and Germany was being bombed that Hitler relented and went to a full-time war economy - which prolonged the war by another year, by some accounts.
Putin doesn't have that luxury - the average Russian was struggling before the war (compared to Western standards) and now is even worse off.  It is not clear whether they will see the West as the villain in this struggle, or Putin himself.
Of course, the ultimate parallel to Mussolini is that eventually he ran away and was found and hanged by his heels - liberating the Italian people, at least for a moment.  Supposedly, Putin has removed his immediate family to an underground bunker and may be planning on fleeing Moscow in the near future for a flying doomsday plane.  But those are just rumors at this point.
If Putin was removed from power, however, it would solve a lot of problems.  It would end the war and end the sanctions and re-establish a working relationship with the West.  That can't happen so long as Putin is around.  So Oligarchs, you know what to do - and you have the money to do it with, right?
Who knows, maybe by Thursday, everything will change.
Newer Post Older Post Home