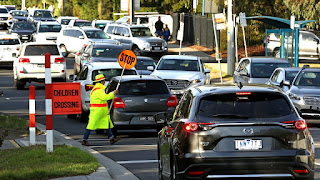 When did picking up your kids from school become a thing?
When I was a kid, you took the bus to school, or walked, or rode your bike.  When you got your driver's license, you drove - provided you had a car, of course.  But no one that I knew of was picked up and dropped off at school by their parents.  It just wasn't done.  Parents had better things to do with their time.
Well, that's changed.  I noticed that people seem to be driving again - pandemic's over, folks! And they are all driving like manics.  Seems traffic volume has doubled in recent weeks.  And you have to be careful around school zones - the speed limit drops down to 25MPH or even 15MPH in some places!
Not only that, though, there is usually a line of cars around the block, waiting to pick up their kids at school.  Woe be to the driver who gets caught on the road when school is about to let out!
My parents never drove me to school.  Well, they did once or twice when I missed the bus.  On a cold winter morning in Syracuse, Mom would be in her pajamas and housecoat, driving the Vega, smoking a True cigarette and cursing me out the whole way.  "Why can't you get up earlier in the morning?" she would say.  Of course, she was pissed-off because she wanted to sleep late - until 10:0AM usually - and here I was waking her up at 7:00AM.  Depression is a bitch.
I learned early on not to miss the bus.  Or if I did, it was just easier to skip school.  But today, you see someone driving their kid to and from school, it isn't because they missed the bus.  And the cost must be staggering - you're looking at 50 cents a mile at least, each way, twice a day.  It's like commuting to work - twice!  And why?
I am not sure why, but maybe the "stranger danger" paranoia has something to do with it.  We have been treated to all sorts of stories about kids being kidnapped, which indeed is a tragedy.  But like with "identity theft" it is a bit overstated.  They count ordinary credit card fraud as "identity theft" to make the numbers seem larger than they really are.
Similarly, the "missing children" include "abduction" by non-custodial parents (e.g., divorced Dad) which indeed can be dangerous, as some parents are indeed deranged and feel that "if I can't have custody of my kid, no one can!" and they either go underground or kill their own child.  Father of the year, right there.
I digress, but I get flack from some readers who complain, "You don't know what it's like to be a parent!" and maybe that is true.  But from what I read in the paper, a lot of people who have kids don't know what it is like to be a parent, either.  Having children doesn't automatically make someone special.  Or, as a comedian once noted, "I don't know how to fly a helicopter, either.  But when I see one in a tree, I know something ain't right!"
Oddly enough, you read about these cases, and it is often the non-custodial parent picking up the child at school.  He (or She) is indeed the parent after all, and the kids trust their parents, so the school officials don't intervene - or didn't in some cases.  I am sure today there is some mechanism in place to make sure the correct parent is picking up the correct kid - but how does that work, with the dozens or over 100 cars waiting in line?  Do you have to show ID?  What?  Sounds tricky. Then again, the bus is no different and you hear horror stories about kids being let out at the wrong stop or being abducted from the bus stop - which no doubt feeds the fear of "stranger danger".
Of course, runaways (and throwaways) account for another big chunk of "missing child" statistics.  And again, it is sad, as I witnessed firsthand, when a teenager runs away from home.  You try to explain to them how long a 14-year-old can live on the streets without being abused or killed, but it falls on deaf ears.
I suppose after-school activities is another reason for Mom (or Dad) to play chauffeur.  The kids have soccer or karate or band and need to be driven to a different location for these activities.  If so, then Mom is really putting the miles on the SUV every day!  It is funny, but we talk about dual-income families so much these days, and yet I see Moms (and it is mostly Moms) waiting in line when school lets out, their engines idling, for a half-hour or more.  Do they not have jobs?  And it isn't just at the upscale schools, but even the elementary school in the ghetto.
It is funny, but we were in Atlanta once and going to this restaurant.  We got stuck in "Mommy-traffic" at a Montessori school.  All the upscale Moms were driving Tahoes or Suburbans, mostly black or dark blue, with the sticker of the school logo in the corner of the rear window - indicating they were authorized to pick up a kid, I guess.  I felt really bad for the one Mom in a mini-van.  I am sure the rest of the Karens mock her and don't even talk to her.
The worst example was in Alexandria, Virginia - again at a Montessori school - where this tiny lady was driving a Hummer.  And I don't mean an H2 or H3, but the original Desert Storm model, two lanes wide, on a narrow side-street.  She was blocking traffic both ways.  We all had to wait until her precious precious was ready to leave.  It was hilarious.

I am not sure what the point of this is, other than it is one of those things you wake up and notice one day.  You notice that the entire world has changed in some aspect or another, and the change was so gradual what we don't notice it.  It is like smart phones.  We all mocked the people who bought the first ones and walked around looking at them intently and then walking straight into a parking meter.  Today, we are all brain-dead smart-phone users, doom-scrolling for the latest news or trying to "stay in touch" via social media, while at the same time, insulating ourselves from the immediate world at large.

Picking up your kids at school is now a thing and it probably won't change very soon.  It is funny, but I recall an article in the Washington Post about a woman who let her 9-year-old son take the subway to school.  This was, of course, during the brief heyday of New York City when Mayor Bloomberg practiced "broken window policing" and the subways were clean and new and people well-behaved.  Today, they are homeless shelters and we can't do anything about it - it's impossible!  Right?

She was, of course, excoriated online as the World's Worst Mom.  And maybe because people remember the Etan Patz case.  Etan was only six years old when his parents allowed him to walk to the bus stop alone and some deranged idiot kidnapped and killed him.  Yes, this does happen - just as runaway 14-year-olds are vulnerable to sickos and psychos.

But there has to be some sort of happy medium.   Otherwise, why bother having school buses at all?  I suppose the self-driving car will be an answer of sorts to this problem.  It could be programmed to take the kids to school - and only school - and the doors locked once they get in.  And video monitoring (already a fact of life) will let Mom keep an eye on the tots while she sips her coffee at home.  Perhaps.

I am trying to think back to my early school days.  In Illinois, the bus stop was across the street from our house.  My brother (three years older) and I would wait there along with several other kids from the neighborhood.  Safety in numbers.  But in terms of "free range kids" we were allowed a lot of latitude.  We could ride our Stingrays a mile or more to the candy store.  We run wild through the neighborhood, climbing the skeletal framing of the new houses going up - and then jumping from the second story onto a sand pile.  We would throw rocks into the wet concrete of the newly poured basements - and then show them to the kids who moved in once the houses were built.  I guess it was a different world, a simpler time.

Or was it?  We were shown the "stranger danger" film more than once in school and admonished "never to take rides (or candy) from strangers!"  So the risk to kids was known even back then.  Of course, back then, a "small family" was four children and I guess parents felt that they could afford to lose one or two along the way.

Not everyone subscribes to the kiddie chauffeur model, however.  My neighbors have their children ride the buses to school (there are more than one) and I am awakened every morning to the sound of air brakes.  But the bus drops them at the end of the driveway, so I am not sure there is much "danger" on our little island from strangers or otherwise.  Incidentally, when we moved here there were hardly any children on the island.  "God's waiting room" is changing and we are seeing more and more kids around.  Time to move, I guess.

Maybe if gas goes to $5 a gallon, people will put their kids on the bus again.  Maybe, but I doubt it.  It seems to me people would rather bitch and moan and complain about gas prices rather than actually do something about it.  During a recent trip to Florida with the trailer, we got an amazing 14 MPG on the way down, and 15 MPG on the way back (tailwind!).  That doesn't sound like much, but most RV'ers are getting 8-11 MPG on a good day - or less.  The secret was, of course, to stay in the right lane and go about 60 MPH.  It was amazing to me how so many people were speeding and cutting each other off - even truckers - just to get somewhere ten minutes faster.  With gas at $4.80 a gallon and diesel at $5.65 you'd think they'd slow down, but it is easier to put a "Let's Go Brandon!" sticker on your bumper instead.

The cost of driving your kids to school could be a lot more than you think.  Operating a car is more than just the cost of gas.  But it is a luxury we can afford - I guess.  For now.