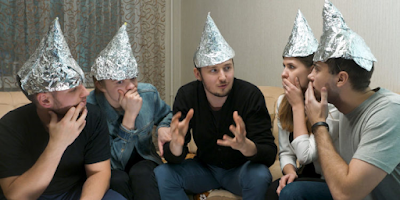 A new study has come out confirming all my previously held beliefs!  Oh, wait....

A recent click-bait article online posits that people who believe in populism are also very gullible.  Imagine that - a Trump supporter or a Qanonsense believer being gullible!  They are probably into an MLM scheme, too!  (Sadly, many are, which is why they are so angry all the time).  It sounds entirely plausible, until you read further into the article:

In Study 1, researchers surveyed a total of 70,882 participants from 13 different countries in the European Union for political ideology, conspiracy mentality, and populist attitudes. Results showed that stronger populist attitudes were associated with increased conspiracy mentality for all 13 countries. Study 1 results also showed that increased conspiracy mentality is more likely in women (vs. men), older people (vs. younger people), those with lower education levels (vs. those with higher education), and people on the political right (vs. political left).
In Study 2, researchers expanded their scope to include other measures of gullibility such as bullshit receptivity, or the tendency for people to perceive nonsense statements as profound (e.g., “Hidden meaning transforms unparalleled abstract beauty), and belief in the supernatural. They also expanded to assess participants’ readiness to believe news, as previous research shows populist attitudes are associated with the tendency to believe news regardless of the source or plausibility of that news.
Unlike Study 1, Study 2 was comprised of only U.S. participants with a total sample size of 308. Participants in Study 2 were assessed for populist attitudes, political ideology, and cognition reflection (analytical thinking). Participants then read five politically neutral news articles that researchers manipulated to either come from a mainstream news site (e.g., CBS, CNN) or an alternative, unknown news site (e.g., “Your news,” “US.net”). All participants then rated the articles for how much they thought the information was accurate, credible, and true.
Results of Study 2 show that stronger populist attitudes are associated with increased gullibility of news (regardless of the source), increased conspiracy mentality, increased belief in the supernatural, increased belief in conspiracy theories, and higher bullshit receptivity.