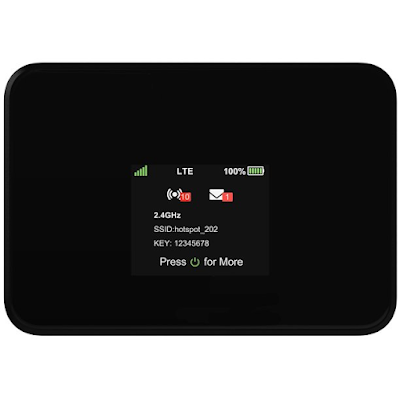 It took a while, but it finally works, sort of.

I signed up for the "Affordable Communications Program" (ACP) back in February.  The deal is, if your household income is low (and ours is) you qualify for a $30 credit on your monthly phone bill or Internet bill.  One of the options was a 100GB mobile hotspot for $25 a month.  We are paying $10 a month, apiece for a total of 20 GB of hotspot data on our phones, so this seemed like a good deal - for $5 more, we get five times as much data.  And since we are 100% wireless at this point, it made sense.

So I signed up for the ACP and uploaded a copy of last year's tax return.  Almost right away I got a notice from the ACP people (FCC) that I was approved.  I went on the AT&T site to sign up for a plan and they said, "thank you for your submission, we will contact you in 24-48 hours by phone or text" and then..... crickets chirping.

I figured the program was new (12/31/2021) so maybe they were having teething pains (they were) or maybe one of those "unknown caller" phone calls I got was from them.  They claimed they tried to contact me.  I filled out the form again - and again - and nothing.  That probably made things worse.  User error.

Calling the AT&T support center was a nightmare.  I was on hold for 1 hour and 23 minutes and no one picked up.  I finally got through and of course, it was an overseas call center.  They told me I had to get my "device" first and a SIM card.  So I went to Walmart online (suggested by the call center and the website) and bought a 4G LTE hotspot for $49, which they delivered in two days, arriving on a Sunday no less - free shipping.

Now the fun begins.  I installed the SIM card and went on the AT&T prepaid ACP site and typed in the SIM number of the card and the IMEI number of the device (long numbers and don't get even one digit wrong!) and..... "Sorry, we already have you signed up for the ACP program on another device!"

Really?  Which one?  Because both our phone plans renewed this month at the standard rate (we use autopay which gives a $10 discount).  So I called the number on the hotspot instructions to set up the device.  The nice lady input the SIM number and IMEI number again and..... same deal.  So she calls an "ACP Specialist" and they tell me I have the ACP set up for my own phone number (they ask for a "contact phone number" and I guess the system took this as the phone number for the device.

So they set up a new phone number for the hotspot.  You can't take calls on a hotspot but you can get text messages.  They are a cell phone that doesn't take calls, just Internet, but it needs a "phone number" anyway.  This is not my first experience with hotspots - I had a T-mobile one years ago (before 3G even) and I think a Verizon one as well.  They were always cranky - and expensive.

We get the phone number and I set up the account online with the PIN.  I log into the AT&T Prepaid website and it says I owe $55 (the standard rate).  So back to the "ACP Specialist" and she has to call the FCC (ACP people) to "transfer" my ACP benefit to the new number.  More time on hold, which I use as an opportunity to refinish a chair.

Finally she comes back, they apply the benefit, and the amount billed drops from $55 a month to $25 a month and I set up autopay - it says "next bill due April 20th for $25" - and I get four bars of service.

Total time on the phone, 1 hour, 12 minutes, 35 seconds.  Ouch.  If I wasn't dicking around with the ACP program, it would have been done online.  If I hadn't screwed up the process (apparently) it would have gone smoothly.  HINT:  Buy your device first (and SIM card) from Walmart or another source of AT&T prepaid (or used from eBay or whatever) and it is much easier to setup online.

Does it work?  I am using it to type this.  But it isn't as fast as Mark's 5G phone and not as consistent.  It runs about 15Mips download if I elevate it and have it near a window.  Other times, it drops to nearly nothing.  Mark's 5G phone does a blistering 30-40Mips.  They are shooting a movie (The Color Purple?  I though that was done already!) on the Island and our cell service drops when the island is busy.  When the Governor comes, the GBI brings their own portable cell tower for security.

So we streamed YouTube with no problem on the new Chromebook, but PlutoTV simply refused to load, claiming there was "no connection" - is AT&T throttling?  (Maybe it was "stream saver" being engaged).  Disney+ would not load, either.  And Netflix said, "You cannot display Netflix on a secondary screen!" (why?) and claimed Mark's account no longer existed (it was suspended, but I guess they decided to delete it - fuck you, Netflix, circling the drain much?).

I will try to set up the chromebook so the screens are mirrored or we are on one screen.  I guess Netflix doesn't want you streaming to a projector and showing movies for money or something.  I was able to get PlutoTV to work on Mark's old Samsung pad device - quite well in fact.  So he can watch pottery YouTube videos on that device.  With 100GB of data, I can leave the hotspot on all the time and not worry about going over data limits.   It opens up all sorts of opportunities - and we can take it with us on the road as well.

The hotspot has 2.5 and 5 GHz channels, of which only the Chromebook recognizes both. All the other devices seem to be limited to 2.5GHz.  5Ghz is faster, supposedly, but the hotspot has to be closer to the device to work.  I ended up putting the hotspot on the porch where it got 4 bars.  Next to the Chromebook, it dropped to 1 bar.  More experimentation is needed.  We may need to upgrade to a 5G hotspot.  They had one at the AT&T store - they wanted $500 for it (It was a franchise store, selling "plans" - not a "real" AT&T corporate store).  (UPDATE:  Elevating the hotspot from the table seems to work best  - about 12" like on a roll of paper towels.  Goes from one bar to three!).

So far, it is working "OK" but the streaming issues are troubling.   It could be an issue with the physical hotspot itself (I did buy the cheapest model, after all) or it could be AT&T throttling "foreign" services or services that don't pay a fee to AT&T.  You know, that whole "Net Neutrality" thing.  Of course, the ultimate answer is to consume less media which we do.  We sign up for one service at a time, watch for a month and then shut it down.  You can pretty much watch all the worthwhile content of any given streaming channel in a month.  Disney+ for example, is pretty thin, once you go outside the Mandalorian sandbox.  I mean, there are only so many kiddie movies you can watch.  Netflix has devolved from a "movie" service into a lame TV-show service, with these "Netflix Original Content" series that rely on you getting hooked on the soap-opera characters.  No Thanks.

That just leaves me watching 1960's car dealer training films and Mark watching channels of camping lesbians who bake in wilderness - on YouTube.  But the new CEO of YouTube is trying to make that as toxic an experience as well, plastering with ads, auto-loading videos and videos that don't close all the way when you close them.

Speaking of ads, what's up with PlutoTV?  Sure, it is the go-to site to watch old episodes of "Mission Impossible" or "Hawaii Five-O" - but the ads are all for laundry detergents and suicide prevention.  And all feature African-American female actors.  What's up ladies?  Is doing laundry that depressing?  And why do the poor always buy brand-name products?  It is interesting to watch, as we just get a big jug of whatever the cheapest crap is at the wholesale club.  I am not interested in "Tide Pods" either to eat or do laundry.

It is funny, but most Americans watch 4.6 hours of television every single day.  And yet, we watch a streaming show for maybe an hour or two every other day or every third day.  Some nights, it just seems like it would be more relaxing to read a cheap paperback or just sit and talk than to be pummeled in the head by some television show.  And of course, it is always more profitable and productive to actually do something than to watch Tee-Vee.  You'd be surprised how many people are up-to-date on their "latest shows" or know about the latest outrage on Fox News, but their laundry rests in a pile on the floor in their basement.

There is a reason I call the television "the depression box".