Are People Really Using Tide Detergent to Pay for Drugs? 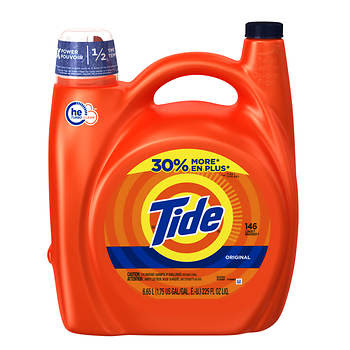 Forget gold!  That is so last year.  All my money is invested in TIDE!


In recent articles online, there are stories, unsubstantiated, that inner-city people are not only shoplifting Tide laundry detergent, but that it has become a de facto currency of exchange in the drug trade.

Before you ROTFLMAO, there is a nugget of reality in these stories, even if they are not really identifying a tread.

Money is just an idea, remember?  So you can exchange any sort of talisman that represents the idea of money.   Even a bottle of detergent.

And this would not be the first time detergent was used as currency.

In Japan, they have Pachinko Parlors, which are big shiny buildings that look like slot machines.  Japanese who are addicted to gambling, go in there and play Pachinko, which is sort of like a vertical pin-ball machine.

But, since they cannot play for money prizes (which would be against the law) the prizes awarded are often small household appliances and even boxes of detergent.  Often these are bartered around like cash, and even used to buy more balls for the Pachinko machine.   Like any gambling operation, the gamblers usually spend their winnings on more gambling.  So the boxes of detergent just stand as talismans of winnings - to be cashed in for more bets, later on.

And this is why I am a bit skeptical that the inner-city drug gangs now accept Cash, MasterCard, Visa, and Tide.  In an open-looped system, they would have no use for Tide as a medium of exchange, as the people the drug dealers have to give their money to, have to be paid in cash, all the way up the chain to Mexican drug gangs, who, while they probably could USE cleaner laundry, nevertheless would prefer American Greenbacks.

Supposedly, the story goes, Tide is used as a medium of exchange as a large bottle can cost $20 or more at the store, is easy to shoplift, and according to articles (is it April 1 already?) can easily be sold and exchanged "on the street".

But frankly, I am not sure I would pay much for purloined Tide.  Why?  Well, because I don't live in the inner-city, I use generic cheap detergent - whatever has the lowest cost-per-load at the wholesale club (I believe this is Arm & Hammer).  Soap is soap - Tide has no magic secret ingredients.  Only the plebes fall for that sort of nonsense - and then use a coupon to buy it with.

And yes, poor people are more brand-conscious and status-conscious than the rich.  Why?  Perhaps it is because they are aspirational, or perhaps they want to have the trappings of wealth.   Or maybe they are just idiots who make stupid financial decisions, which is why they are poor in the first place.   Yup, I'm afraid it is the latter one.

I sincerely doubt that liquid Tide has replaced the U.S. Dollar as the currency of choice in many urban neighborhoods.   But stories like this sell newspapers.  Newspapers take three incidents and call it a trend.  Perhaps this is the same pattern-recognition software in  our brains that finds the face of Jesus on a Grilled Cheese Sandwich - or puts it there.
And yes, once the story gets out, copycats follow suit.  "Hey, Tide is valuable, let's go steal some!  I read about it in the paper!"

And, it goes without saying that some yahoo will start hoarding Tide in his basement - cashing in his Glenn Beck Commemorative Gold Coins to buy a tractor trailer load.