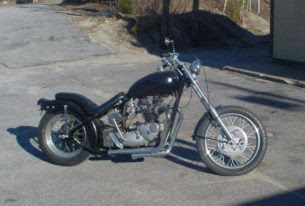 A friend of mine built a chopper from a bunch of parts that came in cardboard boxes.  The end result, well, was less than spectacular.

When I lived in Connecticut as a youth, I shared an apartment with a lot of 20-somethings.  We were in college at the time, and in the basement lived a fellow who was at the ripe old age of 26, and we were in awe of his age and expertise.   We were that dumb.

He bought a motorcycle from a friend for $50.  It came in a series of cardboard boxes.  It was an old Triumph Bonneville that someone, somewhere along the line, decided to make into a wicked chopper, complete with extended "springer" forks, a fender seat, ape-hanger bars, and an iron cross tail light and matching rear-view mirror.   In one of the boxes was a chrome Nazi helmet with a spike the middle.  A complete white-trash starter kit.

My friend started working on it, with the idea that he would assemble it and ride it like in the movie "Easy Rider".  But it was anything but an easy ride.  He spent months just sanding and bondo-ing all the dents out of the gas tank, and I would spend hours with him in the basement, smoking pot, while he sanded that gas tank and talked about how cool the bike would be, once it was done.

As a chopper, it was an exercise in minimalism.  If someone had left this bike unmolested, it would be worth a tidy sum today, and be a head-turner as well.  But back then, in the 1970's, it was just an old British bike, to be sacrificed on the altar of teenaged and 20-something dreams of "mods" and customization.  Today, the same thing occurs, with innocent young Hondas being taken to the torture chamber of teenage mods, with predictable results.  The U.N. Commission on Human rights should do something.  Oh, the horror of it all.

The chopper had no front brake.  That was sacrificed on the altar of minimalism.  So it relied on the rear drum brake for its sum total stopping power.  If you know anything about motorcycles or cars, you know this is a horribly bad idea - 90% of your braking power is in the front wheels, not the rear.  And locking up the rear is a sure recipe for a skid and accident.  But no worries, right?

The front tire and wheel was a thin, almost bicycle-like tire with a bicycle-wheel spoke lacing.  It hardly had anything to it.  And of course, no front fender would mar the minimalist approach to the design.

In the rear was a wide wheel with what appeared to be a dry-rotted studded snow tire, (whitewall, of course) off an old Dodge Dart.  And I am not kidding when I say this.  It was not a motorcycle tire, but a car tire, and would cause problems, down the road.

After about a year of sanding the tank, he finally got the courage to assemble the thing.  He talked long and loud about having the tank done in a metalflake finish with an airbrushed mural of a naked woman on it - he had a friend who did such things.  But of course, every time he had $20 in his pocket, he bought pot, so the tank mural was not to be.

He painted the frame with Rustoleum black, from foo-foo cans.  The gas tank remained primer brown with streaks of red bondo. It was a package.  The sole instrument was a speedometer, clamped to the ape-hanger handlebars, and apparently from a Schwinn.  A tiny headlight between the chrome arms of the "Chopper" forks was the only concession to laws and reality.

While the extended chopper forks had been added, the frame had never been chopped to correct the steering angle.  As a result, the front of the frame rose way up in the air - pointing skyward, while the long chopper forks (and I want to say they were six feet) made a perfect triangle pointing toward the ground.  The whole thing looked ridiculous.  The tiny tank hung off the frame like a pair of retracted testicles.

Sitting on the rear fender seat, one could barely reach the ape-hanger bars, even if you had long arms.  The iron cross taillight was attached to one rear stay.  It was a machine!

He managed to get the engine running.  With two straight pipes, it was loud as hell, even for a 750cc engine.  Clouds of blue smoke came out, with every twist of the throttle.  My friend gunned the engine, a grin appearing on his face, beneath the chrome Nazi helmet and the Rommel goggles.

He let out the clutch and took off.  He wobbled around the first curve, with the rear of the bike doing alarming things - swaying first left, then right.  He zoomed out of sight and we heard the straight pipes echoing from the apartment buildings down the street.  Then silence.  We presumed he went off for a ride and to show off his chopper.

An hour later, he returned, puffing heavily as he pushed the chopper up the hill toward our apartment complex.  "Fucking piece of shit!" he said, "It's fucking un-rideable!"

He had set down the bike about two turns past our complex.  With the extended forks and the oddball steering geometry, not to mention the combination of bicycle tire up front and car snow-tire in the rear, it basically could not be ridden - in anything other than a very straight line.

The bike was a mess - again.  There were dents in the tank and one carburetor was broken off - as was the spike on his Nazi helmet. He skinned his knee and elbow and walked with a limp for a few weeks, but otherwise seemed no worse for the wear.  No doubt, today, those injuries are causing him more than a little soreness in his old age.

He spent the next month disassembling the bike in the basement, promising to "fix" the bike to make it ride-able.  He was going to have the frame chopped and the steering angle changed to match the extended forks.  Or perhaps he would get new forks for it - perhaps not so radically long.

Before long, the chopper returned to the cardboard boxes from whence it came.  And my friend lost interest in it.  He finally traded it for a bag of weed, and that was the end of that.


* * *
A vintage 1968 Triumph Bonneville in original condition would be worth a tidy sum today - and be a piece of history.  But somewhere along the line, some kid decided he had to have a chopper, and used a very unlikely bike to make one.

I suppose today, it might still be around somewhere, revived as a "rat bike" with red painted wheel rims, white wall tires and a bowling-ball-black tank finish.  Probably still un-rideable, though.

It is possible to over-customize and over-mod a vehicle - the point where it basically is no longer functional as a vehicle.  Kids do this all the time, with these "rice racer" mods, that cripple a car to the point where it can barely do 50 mph without losing control.  Slammed suspensions and huge rims may look cool, but often they ride and handle far worse that stock.

And it terms of throwing money away, well, it is just utter waste.

My friend got off cheap.  He paid $50 for he bike, spent only another $50 on primer, black paint, and bondo, and then sold the whole mess for a bag of weed.  Others are not so lucky.  For example, the guy he bought the bike from actually spent a lot of money on extended forks, a Nazi helmet, and an iron cross tail light and mirror.

All I can say is, before you decide to build a chopper out of an old bike, or mod your Mom's old Honda into a race car, think carefully of where you are going.  Chances are, you are going to just destroy what you had started with, but only after blowing through a lot of cash.

And if someone ever offers to sell you a chopper that is in a lot of cardboard boxes, well, walk away.
Newer Post Older Post Home