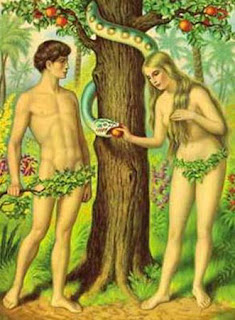 Adam an Eve invent clothing.  The world has never been the same.
A lot of screaming and shouting is going on today about the "mandate" to buy health insurance.  I am not sure it was a swell idea - a tax credit or other plan would have been far easier to administer and created less of a fuss.  But this is what they came up with, in their infinite wisdom.

And I am not sure why this is unconstitutional.  If people don't like it, wouldn't they vote new politicians into office who would overturn it?  Is the Supreme Court being an "activist" court by failing to let the political process take its course?  Or is all this "strict interpretation" and "activism" labels just a smokescreen for doing what you want to do and using post hoc justifications?

But beyond that, people are saying nonsense, like, "The government is FORCING US to BUY THINGS and DO THINGS we don't want to DO!"

And yet, every day, you are forced to do things you don't want to do, by the government.

When you get dressed in the morning, this is due to government mandate.  Don't believe me?  Try going to work naked.  In all 50 States, there are laws against public nudity, and no one has ever, ever challenged them on Constitutional grounds.

"But your honor!  The Government is FORCING ME TO BUY CLOTHES!"

And it is, too.  You have to get something - a sack even - to cover yourself in public.

And unless you plan on staying inside your house forever, this is a mandate that applies to all of us.

Other mandates are tied to behavior.  We mandate people wear seatbelts and motorcycle helmets, in many States, as a condition of those States receiving Federal Highway funds.  The heavy hand of government, yet again.  And yet few people feel these are onerous requirements.  Well a few do, but they are fools, period.

The social cost of motorcyclists with head injuries (who, by the way, make excellent organ donors!  Sign those cards, boys!  I need a new Liver!) far outweighs the "freedom" to ride around with no helmet, just one 5 mph collision away from a coma.   Ditto for seat belts, which reduce injuries, particularly in low-speed collisions - which are most collisions.  A simple 30 mph impact can be fatal - if you are not wearing a seat belt.

But of course, these are mandates tied to personal endeavors.  Driving is a privilege, not a right, yet a privilege enjoyed by the overwhelming majority of the country - and one necessary to economic survival for most people, you could argue.  Yet these mandates exist - and no one challenges them on Constitutional grounds.

You also are mandated to pay taxes (tax protesters notwithstanding) and to fund your Social Security and Medicare accounts.   You could argue, again, that these are behavioral-based mandates - that you only are mandated to pay taxes if you have income.  But survival in this country with no income is nearly impossible, unless you are a minor or someone's dependent (e.g., Cabana-Boy).  Otherwise, you have to work and earn money, and pay these taxes.  Even people who inherit or win the lottery have to pay taxes - on income and capital gains.

Is not the tax law a "mandate" of sorts?  In fact, not really of "of sorts" but just a naked mandate, period.

There are, of course, other mandates.   For example, if you are a young man, between the ages of 18 and 25, you have to register for the selective service, even if there isn't a draft, today.  And, by the way, with our equality and all, why aren't young women forced to register?  And with soldiers as old as 45 serving in Iraq, why only 18-25 year olds?

You think that is bad?  Well, if there is a war, they can draft you, force you to join the Army (or Navy, Air Force, or Marines) and then go to war, charge a machine gun and get killed.  Talk about a mandate!   The government literally owns your life, if you are of draft age, and there is a war on.  And if you refuse to go, you will be court-martialed and jailed, possibly executed.

There are tons of other mandates, of course.  And some are "behavioral-based" such as property taxes, which are applied if you own property.  And you can argue that these are excusable as you can avoid these mandates by choosing not to own property.  But unless you are homeless, you need a place to live.  And even if you rent, you are paying property taxes, indirectly, through your landlord.  The only people not paying property taxes this way are those in the military, in jail, or homeless.  It is a pretty broad mandate!

I am not sure what this argument that this new mandate is "different" is all about.  The justices on the supreme court are clearly being political, barfing up Fox News Talking Points (a new low for the court, since Dred Scott) about how the new law would force people to "buy something they don't want" just because they exist.

But the law doesn't say that.  They can buy insurance, or pay the fine, tax, fee, or whatever the fuck you want to call it (because, when it comes down to it, any dollar paid to the U.S. Government is a tax, in my mind, period).  And the idea that the government "forcing you to buy something" is somehow novel is, to me, somewhat specious.