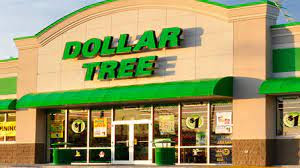 What is the deal with these places?  Are there any bargains? Sometimes.

Dollar Store, Dollar General, Family Dollar, Dollar Tree.  What is up with these places?  They are springing up everywhere like white-trash daisies after a rainstorm in the trailer park.  And they usually are in the worst parts of town, or in very poor villages.

And people go in there and come out with armloads of cheaply made Chinese crap.  Are there bargains galore there? It depends on the store and what you are buying.

I related the story before of when we bought our winter home, we needed a spaghetti spoon for the kitchen.  We were about to go into the Bed, Bath, and Beyond to get one, when I saw a Family Dollar or whatever next door.   "Hey!" I said, "They probably have one in there, and for a dollar!"

So we went in and saw various plastic mixing spoons, including a strainer spoon and a spaghetti spoon, all made of melamine, sort of poorly (with flashing from the molding process) for a dollar.  We bought one and went home.

That night, we made spaghetti and Mark put the spoon in the pot.  As he pulled up a mound of spaghetti, the spoon slowly bent, from the heat, until it was at a 90 degree angle, at which point it broke in half.

Query:  Was that worth a dollar?

Answer:  It was worth nothing.  Less than nothing, as the effort in buying it was a waste.

A lot of the crap they sell there is like that - garbage that will be broken by the time you get it to the parking lot.  In many cases, there is "something wrong" with nearly everything they sell.

There are, of course, some bargains.  Paper goods can be a good deal, and we bought some party decorations there for a party.   In that aisle, they had those chemical light tubes, that you can wear around your neck, or whatever, like at a rave or whatnot.  I thought, "Gee, a dollar, why not?"

And the answer of course, was that they were old and stale and barely made any light.  Not worth a dollar.

I could never figure out why people would shop there.  And today, I went into a new one that just opened, and it hit me.  People are doing just that - they are shopping there - impulse-buying stuff they don't really need, but at a price-point they can "afford."

It is like playing the penny-slots at the Casino.    Gambling is expensive, and a lot of people can't afford to put a dollar in a slot machine - or even 25 cents.   So the casinos came up with the penny slots - slot machines that run on a penny.    It is about the slowest way in the world to lose a 50 cent roll of pennies, to be sure.

But it serves a sector of the customer base that wants to gamble - but can't afford to spend very much.

Dollar stores work the same way.   They provide impulse-shopping items for poor people, so they can experience the feeling of shopping but do so on a budget.  The act of buying gives them a feeling of empowerment - as if they were participating in the economy.  Of course, spending wealth is really the opposite of empowerment.

For many people, the activity of shopping is enjoyable.   They get to look at neat things and think, "Gee I could use that!" and the kids look at toys or candy.    In a traditional store, doing this would mean leaving the store $50 to $100 poorer, with a bunch of crap you don't need or want.

At the Dollar-type stores, you can do this for $10, and half the junk can just be dropped into the dumpster behind the store, so you avoid that whole messy hoarding deal as well, as well as the hassle of bringing any of it home.  It is pretend-shopping, just as penny-slots is pretend-gambling.

But are there any bargains there?

Yes, a few.  But you have to follow a few Rules:

1.  Don't impulse buy things.  At the register, the cashier was "selling" a package of 'personal sized Snickers' for a dollar.   Five candy bars for a dollar - not a bad price.  But I didn't need or want a candy bar, so in effect it would have been a dollar too much, anyway.
Dollar-types stores are chock full of things that are flashy and delicious and colorful and look cool.  And hey, it's only a dollar, you can't afford not to buy it, right?   But that sort of thinking ends up with a cart-load of crap and $50 missing from your wallet, one dollar at a time.
If you go to a Dollar-type store, have a list of things you want to buy and buy those things.  Avoid impulse-buying stuff, just because it looks appealing and is not very costly.   Paying a dollar for something you don't need, is paying a dollar too much.
2.  Know Your Prices:  At the store they had bottled water for $1 a six-pack.   Wow!  That's a good deal!  The gas station wants a dollar a bottle!  (ironically, so does the Dollar Store, if you buy the water from the cooler at the checkout).   But Publix has an entire CASE of water for $2.99 (on sale), versus the dollar store price of $4 a case.   Which really is the better deal?

And it goes without saying that tap water is free, which beats even a dollar.
On the other hand, things like soap can be cheap.  A bottle of shampoo is, well a dollar for "White Rain" brand.  The cheapest comparable generic next door at the Grocery Store is $2.39 - for a smaller size.

3.  But Don't Forget Quality:  Even if something is "just a dollar" be sure it is not poorly made, watered down, past its sell-by date (or close to) or some unheard-of  Chinese brand.  The broken spaghetti spoon wasn't worth a dollar.  The dim chemical party lights were similarly disappointing.  The soap may seem like a good price, but if it is watered down, is it really?

My gut reaction is that there are few bargains at these places.  They rely on an impoverished customer base that is neither sophisticated or intelligent.  They can sell bad bargains for a dollar and make them look like good bargains, as their typical customer doesn't recognize the difference.   Moreover, they rely on such customers to impulse-buy more than half their selections, thus consuming more than they intended to, which is not really saving money, but squandering it.
In addition, the flat price of a "dollar" for everything means that some items will be overpriced, and others likely are loss-leaders.  Figuring out which is which is the key.
Do you need a set of wine glasses for your vacation rental?  Dollar stores might be the place to go.  Ditto for cheap dishware for a college student's first apartment.   But check prices carefully.   Even at just a dollar a glass, you may end up paying too much - for what you are getting.
UPDATE:  October 7, 2012
There are marked differences between Family Dollar, Dollar General, Dollar Store, and Dollar Tree stores.  My favorite, hands down, is Dollar Tree - as it is one of the stores where everything IS A DOLLAR.
Some of the other "Dollar" stores are just general merchandise stores that don't seem to have particular bargains.   We've shopped at a few and walked away.   Some were run-down and smelled bad.  Others were clean and had nice merchandise - but the prices were nothing to write home about.
There is a Dollar Tree next to our grocery store, and they sell things there - for a dollar - which are good bargains:
1.  Pasta - box of spaghetti for a dollar.
2.  Pickles - sliced sandwich pickles, for a dollar (made in India, if you can believe that!).
3.  Desiccant (for drying out the camper).
4.  Toothpaste (name brand, a dollar)
5.  Soap - three bars for.... a dollar
6.  Shampoo - a bottle of "Breck" for a dollar.
7.  Pretzels - a big bag for a dollar.
8.  Mouthwash - a 16 ounce bottle for.... a dollar.
9.  Liquid Soap dispenser (with soap) - a dollar.
10.  Dish soap - a dollar.
The list goes on.  Most of these items are for same next door in the grocery store for $3 to $4.  There is a considerable savings.
However, some items don't seem like bargains, as the quality is not as good as the products sold at the wholesale club.  Laundry detergent, for example, is very weak and watery, and does not appear to be such a good bargain.  It does come in a small bottle - handy if you are traveling or renting a house for a week.
Like anything else, the key is to know what prices are like, compare and make rational buying choices.
And not all Dollar Trees are the same.  We've seen some "mega-stores" that have frozen food sections (if you can believe that!) that have a lot of very nice merchandise.
The only thing that troubles me is that over time, inflation will eat into their profit margin, and they will be forced to raise prices to something other than a dollar.   Having a single price does make their shelf stocking a lot easier - just throw the stuff on the shelf, it is already priced by the sign out front.
Maybe it will be the dollar-and-a-quarter-tree or something....
Newer Post Older Post Home