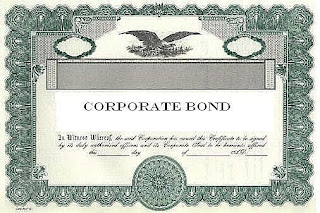 Ron White once famously said that Strippers Don't Take Coupons!   But back in the day, you could strip coupons from bonds.  What does this mean?
As I noted in a previous posting, bonds are a tricky investment, and you should learn about an investment before you plunge into it.  And never invest all your money into one big thing - if it goes bust, you are in a world of woe.   And yet, many people do both - they invest in things they know little about, convinced they are going to "Strike it Rich" and they bet all their money on that one thing, with predictable results - they end up broke.  The Casino Mentality at work, I'm afraid.

The following information is provided for educational purposes only and is very basic information.  I am not suggesting or promoting any kind of investment.   But many people are confused by basic bond terms, and this is an attempt to explain them, to the best of my ability, as I understand them.

Bonds are deceptively simple.  They look about as complex as a car loan.   You loan money to a company, and they hand you a bond, that has a face value of the amount you loaned, and an agreed upon interest rate (the coupon rate) and repayment terms.   You get X% interest payments at predetermined times, and then the face value is paid off at the end of the bond term.

Back in the days of strippable coupons, a bond would come with a series of little "coupons" at the bottom, that could be cut off.  Back in the day, those were often bearer bonds which meant that they were bearer instruments and that whoever held them in their hand was the nominal owner.   Lots of things are bearer instruments such as lottery tickets and cash (although technically, you could make a legal claim to both, but it is an evidentiary nightmare).

And as you might imagine, bearer bonds are problematic, because if they are stolen or lost, the fellow who steals them or finds them can cash them in.   And, as you might imagine, they were also popular with criminals and folks wishing to do bad things, which is why, in the movies, Tom Cruise tells the bad guys he wants to be paid in "Bearer Bonds with the Coupons Attached" - it sounds so cool, but rarely happens today.

But getting back to coupons, you can strip the coupons, but stripper won't take coupons.  Remember that.  Actually, a stripper would take a coupon from a bearer bond, and give you a lap dance to boot, because they are like cash, in many instances.   Each coupon represents an interest payment - 5% for the first year, 5% for the second year, etc.   Taken together, these coupons represent a small annuity, sort of, guaranteeing payments every year for 5 years, in our example.

These coupons have a value, and you can calculate the value based on the future value of money.  And in fact, the coupons are, sort of, little mini-bonds.  While the basic bond (stripped of coupons, or a zero coupon bond) is a promise to pay back, in our example, $1000 in five years, each coupon is a similar promise to pay $50 in one, two, three, four, and five years, respectively.  In other words, each coupon is, itself, another zero-coupon bond.


And some bonds are actually issued this way - as zero coupon bonds which basically say, "I will pay you $1000 in five years" (using our example).   And of course, the value of such a bond, in the present, is less than $1000.

How much is it worth?  Well, you can calculate this, using Future Value of money calculators.  Future Value or "F.V." can be determined, based on the expected rate of return, the assessed risk involved, and the like.  In essence, the market determines how much less you pay for the bond than its face value, and this is often referred to as the discount rate.

So, for example, if we assume a 5% rate of return for one year, the discount rate of the first coupon might be 95, meaning we'd pay 95% of the face value of that coupon ($50) or $47.50.  The other coupons, and the original bond might be similarly discounted.

Now, note a funny thing here.   When we took the original bond, we said there were basically two instruments here - the main bond, and the coupons, which if we could strip, would represent a second type of financial instrument.    But in reality, when you strip the coupons off, each of them becomes a zero coupon bond - so really we have two of the same thing, just in different sizes and maturity dates.

Today, strippable or detachable coupon bonds are not very common.  When you buy a Corporate Bond, you buy the whole thing - the basic bond and the coupon payments. We still refer to the interest rate paid on the bond as the "coupon rate" which is where that term originated from.

And the reason detachable coupon bonds are not that common, is that bearer bonds, in these days of computers and whatnot, are not all that common.  All the fun stuff like offshore accounts, numbered Swiss bank accounts, and bars of gold and uncut diamonds, are sort of going by the wayside, as governments try to get a better handle on their economies and also fight crime and terrorism.  Bearer instruments are just not as commonly used anymore.

And since the coupons are basically zero-coupon bonds themselves, buying bonds and stripping the coupons is sort of silly - you are just taking bond and dividing it into smaller bonds.

However, you do see Zero Coupon bonds (that is to say, a bond that pays out face value only, after a predetermined time).  And for example, the U.S. Treasury sells both kinds.  If you go onto Treasury Direct, you can buy U.S. Government Debt Instruments, which include Savings Bonds, Treasury Bills, Treasury Notes, and other things.  When you buy a Treasury Bill, they hold an auction, and the market determines the discount rate on the note.  It is a zero-coupon bond type instrument.  When you buy a Treasury Note, on the other hand, it is more like a traditional bond, which pays out interest (twice annually, credited to your checking account) and then the face value after a number of years.

Should you buy any of these things?  Corporate Bonds?  Municipal Bonds?  Treasuries?  Yes, No, and Maybe, as I said before.   I would educate myself as to what I am buying and understand the risks.  Usually the higher the return the greater the risk.  You could make 240% on a Mohegan Sun bond, or go broke.  You won't get rich on a Treasury Note (2% over 5 years) but you won't lose your initial investment, either.