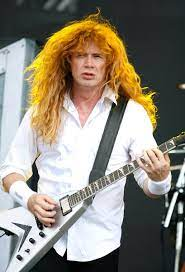 The GOP has been trying to court fundamentalist Christians and conservatives.   How do heavy-metal rock 'n rollers fit into this picture?
David Mustaine, the front man for Megadeath (one of those folksy Christian lite-rock groups) recently made news by saying he believed Obama wasn't a U.S. Citizen and moreover that he was going to support far-right Christian candidate Rick Santorum.
This might sound like an isolated incident, except that Heavy Metal Rocker Ted Nugent recently went on stage and suggested that he would like to machine gun the President to death and make Hillary Clinton suck on his machine gun.   Tasteful.
What is up with this?   Rock and Roll was always the music of youth and rebellion.  Today it is the music of conformity and fiscal policy?   Perhaps not.  I think other things are at stake here.

1.  The music business is dead.  The fact that these rock-and-roll fossils are still performing today, when they were popular when I was a kid is startling.  Their music has aged and the demographic has aged.  So Rock and Roll is no longer about rebellion but about Metamucil.
2.  Rock Stars Make Money - and they don't like to pay taxes.  So when a clown comes into town promising them lower taxes, they bite on it.   They are "rich" but not rich enough to pay the Mitt Romney tax rate (Capital Gains) but rather the 35% earned income rate.
3.  It's Just Music - Political values and music don't always match up.  Rock and Rollers might be perceived as liberal, but many are not.    Just as you might thing Frank Zappa smoked a lot of pot, but in reality he was against drugs.   Not all rockers are drug-addled boozers.
4.  The Connection with Skinheads - Hard metal is popular with the very, very far right - neo-Nazis and skinheads, gun-nuts, KKK followers, and white supremacists.   On the rock spectrum, heavy metal is, well, the GOP wing.
5.  The Connection with Military -  a lot of young guys in the military are into heavy metal (the young white guys, anyway) and being anti-Hillary is sort of a requirement, in a macho environment.  So this is sort of posturing to the crowd, to be conservative, to some extent.

The interesting thing, to me, is that Rock and Roll is indeed truly dead.  Rock and Roll was the music of the anti-establishment, of the lower classes, of the outlaws and the disadvantaged.  It was black music, not GOP country club waltzes played by an orchestra.
But over the years, this has been changed, morphing into Pop, Disco, and basically the background elevator music we hear every day.    It is not surprising that it has become the music of ignorance, violence and hate.  That was just the next step.
But then again, maybe we put too much faith in Rock and Roll.  It was a product, sold to us by record companies and record promoters, hoping to "cash in" on the youth market.  And we bought it all - good and bad.  The Beatles and Grand Funk Railroad.  We bought it all.
And today, it is just marketing for a different demographic.  And it seems odd that a musician practicing in a genre created by blacks would denounce the first black President.
And it is odd that, at one time, the GOP was spearheading efforts to "censor" Rock and Roll lyrics, including (especially) Heavy Metal lyrics.   They have backed away from this in recent years.  But Rick Santorum has pledged to stamp out porn.  Could naughty words be next?
And it seems odd that someone who works in an industry which promotes satanic messages, in a band called "Megadeath" would be getting all gooey inside over a squeaky-clean sweater-vest wearer like Rick Santorum.
Maybe he's just messing with our minds.  Maybe he did too many drugs.  Maybe these rock musicians are just really, really stupid.
I think the latter.
Newer Post Older Post Home