Pissing On The Seat 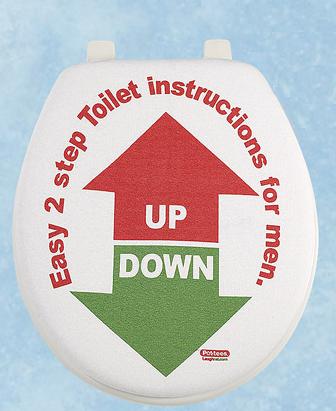 Women made a big deal about men leaving the seat up.   Ladies, you don't know bad it can get!


The other day, I went to use a public restroom at a resort and some idiot had pissed all over the seat.  No, really, it was disgusting.   And I wish I could say this was an isolated incident.  But alas, it was not.   You see this sort of thing a lot these days - everywhere.

And, like everything else, it got me to thinking.   What sort of mindset to people have to have that they do this sort of thing?    Do they think that, in their lifetime, they will never, ever have to use the toilet again?  Don't they realize that perhaps someday, it will be they looking for a place to sit, and find the toilet covered in someone else's urine?

What sort of antisocial mindset does it take to do this?    It is an interesting conundrum.   But, of course, there are a lot of people out there who would rather tear down than build up, even if it means destroying their own environment.   Pissing on the seat is just one example of it.

And Ladies, don't think you get a free pass on this, to do another Oprah-style man-bashing.  One of my jobs as dishwasher at the Old Tyme Gaslight Restaurant was to clean the Ladies' Room, and the stuff you-all do in there is disgusting.  And the things you write on the wall would make a lumberjack blush.  So don't even go there, OK?  This is not a gender thing.

Anti-social behavior takes on a number of forms, from desecrating a public restroom, to spray-painting graffiti on walls, to rioting and looting, to even the online "trolls" who think they are clever (and yea, we get them here).   And before you "graffiti artists" get all up-in-arms (along with the tattoo jerks) you know what I am talking about.   Some really talented artist spray-paints a mural that takes hours and hours of his time (and cases of spray paint) and indeed, is a work of art (whether wanted by the lucky recipient or not, another question).   But them some jerk-ass with a can of black spray paint comes along and "tags" it with some stupid symbol, destroying the artwork.   Even among vandals, there is vandalism.

What do these activities have in common - or more precisely, what causes people to be so anti-social?   Many on the Left would immediately argue that it is because the people who do this are downtrodden and disadvantaged and are taking out their frustrations on society at large.   But experience and statistics disprove that.

The fellow who pissed on the seat was at a resort, not some seedy restroom along the thruway.  And oftentimes, it is wealthy suburban teens who commit severe acts of vandalism and destruction - kids who should have no anger at society, as they have every advantage given to them from birth (which may, ironically, explain their behaviors).

And such destruction can be costly and widespread.   Back in the 1990's, I used to fly out to Fremont, California, to Silicon Valley for work.  All along the highway there, going from Fremont to Oakland, was terrible graffiti on every wall, sign, overpass, and even lamp post.  What was sad about it, was that the highway had recently been done-over with new barrier walls, signage, etc, so that the vandals had ruined what was a very nice roadway.

A few years later, they arrested a young man who came from a wealthy family.  It turns out that all this vandalism - which ranged for miles along the roadway - came from him and a couple of his friends.   Just three or four kids, armed with cans of spray paint (paid for by Dad's credit card) and a lot of free time, and of course that brand-new car he got for his 16th birthday, can ruin 10 miles of roadway to the point where it cost millions of dollars to clean up.

And, as you might expect, his Dad hired the best lawyers possible, and I am sure he probably got off on some youthful offender gig.

When I was a kid, I knew other kids who liked to do this sort of thing - smash things and break stuff.   It seemed like a thrill at the time, but it leaves one with an empty feeling.    How is wrecking things making anything any better?   When you take a baseball bat to someone's mailbox, are you really being clever or creative?  Or just mindlessly destructive?   And where does this all lead to?

What makes people do things like this?  Destroy their own environment?    Recently, in Oakland, two men from the "OWS movement" assaulted two women and called them "dykes".   Their crime? (in addition to being Lesbians, OWS people are apparently SO tolerant!)  The ladies were trying to persuade the men not to riot and burn their own neighborhood.

These men were trying to incite a riot and encourage the protesters to destroy their own immediate surroundings - small businesses and shops that were run by people in the neighborhood and provided services to people in the neighborhood.   It would be a pointless exercise, the women pointed out - it would just destroy what belonged to people like themselves and ruin a neighborhood for people like themselves, and not affect the "1%" at all.

And, of course, this is not the first time this has happened.   During the riots of 1968 (and the L.A. riots) rioters destroyed their own neighborhoods, burning down the businesses that served their own communities.   In many instances, such as in Washington, DC, these neighborhoods never recovered, the businesses never came back, and urban communities found themselves with no services or shops, whatsoever.  Pissing on the seat.

Anti-social behavior like this exists at all levels in our society, I'm afraid.  It is not just an example of someone who is socially or economically disadvantaged working out their rage, but rather a more deep-seated feeling of impotence and perhaps, something else.    The vandal feels, perhaps, that by committing these unseen and undetected crimes that he is, in fact, clever or smart, much as people who post trolls think they are the height of cleverness.   "Look at me!" they say, "I got away with it!  I'm clever!  And society can't stop me!"

Ahhhhhh.... But the Great Karmic Wheel spins around quite rapidly.  The man who pisses on the seat will, one day soon, find himself with explosive diarrhea, and the only restroom in sight will be one where one of his ilk recently visited.   The boy who smashes bottles will find one of them, while walking barefoot on the beach.  And the kid who was the graffiti artist will one day find his luxury car "tagged" with spray paint.

What goes around, comes around.   People who practice this sort of behavior have one thing in common:  They are impoverished, in spirit or body, and never end up getting ahead.   Even the wealthy teenager who vandalizes ends up behind his peers, as his activities take away from his personal wealth and advantage.

In short, there is no profit in it, personally, or for society at large.  Being good and kind to others may sound like a sucker's bet, but it is the one that always pays off in the end.  People who are anti-social, on the other hand, never, ever win.
Newer Post Older Post Home