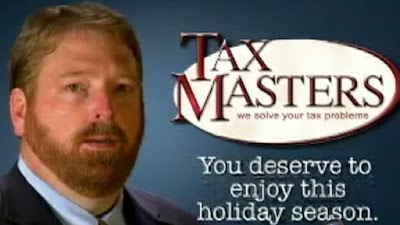 
An article on CNN today talks about TaxMasters and how they have been found guilty of fraud and fined $195 Million.  The company went bankrupt shortly before, in an apparent effort to elude the judgment.  Judgments can be easy to elude, for some people.  Ask OJ.  For you and me, however, we generally lose it all.

The irony here is that companies like this advertise heavily on the television, including on CNN.  One reason these sorts of companies make a lot of money is that they advertise a LOT of the TeeVee and people assume (wrongly) that this means the company has been "vetted" somehow and approved by the television station.  Nothing could be further from the truth.

If you see a loud ad on the TV or on the Internet that promises something-for-nothing, it is likely a bad deal.  Just walk away.   The invention broker, the caveman who buys houses, the tax guy - none of them will help you, just themselves.

In fact, just don't watch TV!  If the television networks are going to allow questionable advertisers to advertise on their networks, should you even patronize their business by watching their shows?  Let's face it, you can live without "Dancing With the Stars" - a show that is only interesting because they told you it was.

So how did the TaxMasters gig work?  Simple, according to the allegations raised in the trial, they took your money, $2,000 to $10,000 and just kept it and did little or nothing to help you with your tax problem.  The client ends up in trouble with the IRS and that's that.

Sounds pretty sweet, eh?  And how can you get away with this?

Easy.  Again, you cannot sue to collect small amounts of money - $2,000 to $10,000 being a good range.  The cost of Attorney's fees would far exceed the amount involved.  And even if you did sue and win, you would have a nearly impossible time collecting, as the lawsuit metioned above illustrates.

They will declare bankruptcy, reincorporate, and be back in business under a new name in no time.

After all, this is the GOP way - a "legitimate business" being "hounded by government regulators!"

If you are having trouble with your taxes, call the IRS first.  Then, talk to an accountant.  There are no secret back-door methods to getting huge tax bills waived, any more than "debt relief agencies" will wipe out your debts with a few phone calls.

That's the same gig there, too.    They take your money, do nothing, and let you go bankrupt.

And you know, bankrupt people don't have the wherewithal to sue you, so it is a perfect game, if you think about it.
OF COURSE A BETTER PLAN IS TO NOT GET INTO TROUBLE WITH OWNING BACK TAXES OR BEING HEAVILY IN DEBT IN THE FIRST PLACE, RIGHT? PEOPLE BRING THIS SORT OF TROUBLE UPON THEMSELVES, PERIOD!!!
Note that your 401(k), IRA and other retirement accounts may be protected from judgements, but may not be protected from IRS liens. Many folks are shocked by this, assuming the IRS is "just another creditor" that stands in line with all the others. Not so.
And if you think about this, it makes sense. People can fund an IRA with the money that they should have been paying to the IRS, and over a number of years, accumulate vast sums of wealth and then, when faced with an audit, just walk away with a fat retirement account.
The old adage in financial investing is "pay yourself first". However, my experience is, "Pay yourself first, but only after you've paid the IRS!"
It is just basic common sense.
UPDATE:  Since I wrote this posting, Taxmasters declared bankruptcy and disappeared into the wind, leaving creditors with nothing.  Oddly enough, in a bit of poetic justice, the largest creditors were the major news networks who carried their advertisements, which helped promote the scheme in the first place.  It is sad, but people think that if something is advertised on CNN or FOX news, it must be legit, because the network would check these things out first and vet them and they would never lie to me, right?
Wrong.
Newer Post Older Post Home