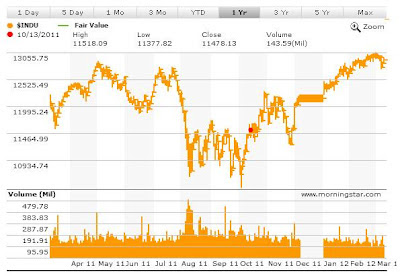 Last year, the GOP manufactured an economic crises in late July of 2011 which wiped out all of the gains the stock market had achieved since January 2011.  Will they do the same thing this year?

October Surprise.  It is the term used by political hacks - the hangers-on and operatives of the political world - to describe a strategy to spring on an opponent just before an election.  A bimbo comes forward with a sex tape (or what at first appears to be one).  Or some allegation is made that a candidate has committed fraud, or some other crime.

And since it is late October, the opponent has no time to craft a response, other than to flail and argue "it ain't true" - which just makes everyone think that he is guilty.

Will we see a similar thing happen this fall?  Bet on it.  The economy will tank - by design, not by accident.  Gas prices will shoot up to $6 a gallon, as refineries mysteriously all go off-line for "maintenance" and problems with the nations pipeline system all manifest themselves at the same time (this is exactly what happened in 2008, just before the election, which I guess was supposed to scare us all into voting for McCain, but it backfired).

How does this happen?  Well, we had a dry-run last year, and it was pretty effective.   Last July, as you may recall, the GOP suddenly woke up one day and realized that the United States was running a budget deficit.  Why this didn't alarm them during the eight years of the Bush Presidency is a good question.  The last time we had a budget surplus was, well, during the Clinton years.

But suddenly, it was decided that this was a problem, and since most people have no clue how big a Billion is (many folks still think it is a million millions, and thus can be easily swayed into thinking numbers are 1,000 times larger than they are) and since most folks can't wrap their heads around a Trillion, either, it is easy to get them all riled up.   And when the economy is in the tank, it is easy to take the national debt and say it is large, compared to the GDP - if you don't tell people that the GDP went down, which is why the comparison looks so scary.

But the mechanism the GOP had at its disposal was the debt ceiling.  We were reaching the limits of an artificial and arbitrary limit the government had placed on itself as to how much money it could borrow.  And this gave them the pretext to create a crises.

So, the talking point memos went out, and every GOP candidate and pundit went on the TeeVee and all predicted mayhem and doom for the country, which, until that point was doing quite nicely, thank-you-very-much and well on its way to economic recovery.

And then the GOP decided to do a double-whammy.  First, they would refuse to pass a debt-ceiling increase, which triggered talks of "default" and a decrease in our AAA+ bond ratings.  This shook up the markets and stocks tanked (see diagram above).  And just to prolong the pain, they decided to create an artificial budget crises and shut down the government well into September, which kept the markets down until October.

Of course, Newt Gingrich tried this back during the Clinton era, and it is one reason they tossed his ass out of Congress.  The government shutdown didn't help the GOP in the long run, and perhaps it didn't help in 2011.   Congressional approval ratings went down to 11%, which is less than 1/4 that of the President.

But the point is, the GOP is not averse to absolutely destroying our economy, if it means they will get elected.  And this is a strategy that has been shown to work, time and time again.  People will not vote for "change" if they think the status quo is doing fine.  And that is the problem today - the economy is recovering and most people don't want to rock the boat at the moment.

So we see these crazy claims that Obama is a terrorist or that "Obamacare" (which is totally different than the "Romneycare" they passed in Massachusetts and donchuforgetit!) will require you to be implanted with a microchip.  No really, they believe that.  I am not kidding.

But historically, odious political movements, from Nazism to Communism to the Taliban, have relied on the technique of creating chaos to make themselves appear to be the salvation.   When there are riots in the streets and food shortages and economic chaos, people will vote for "Law and Order" to set things right, even if it means voting for an extreme political party.

It worked for Nixon, too.   The 1968 riots at the Democratic Convention were all people needed to see in order to vote for Richard Nixon and his "Law and Order" platform.   Makes you wonder if Abby Hoffman wasn't an undercover GOP operative.

In Kabul, people welcomed the Taliban with open arms, as they put an end to the shelling and violence that racked the country for years.  It was only later they realized they had taken a viper to their breast.

In Germany, the street violence between Nazis and Communists seemed out of control, and the economy was in the tank.  When the Nazis promised social order, people bought into it.   And of course, the major industrialists of Germany were supporting the Nazis.  So, once in power, they could increase productivity, particularly when re-arming, and claim economic "success" - for a short while, anyway.

And the list goes on.  Sometimes you have to destroy a village to save a village.

How the GOP will ruin your 401(k) plan this time around remains to be seen.  I suspect the budget will be the trigger again.  Much of the vaunted budget "agreements" in place merely kick the can down the road a ways - in fact until September 2012.  How convenient.

So don't be surprised when the economy goes to hell in the fall of this year.  Bet on it - because some folks think that getting power is worthwhile doing at all costs - even to the extent of destroying everything you've worked for.

And yet, oddly enough, many folks will vote for those who want to destroy their lives.  Elect a President who in the past, destroyed your Parent's pension plan through Bain Capital, and now wants to destroy your 401(k) through political maneuvering.
Newer Post Older Post Home