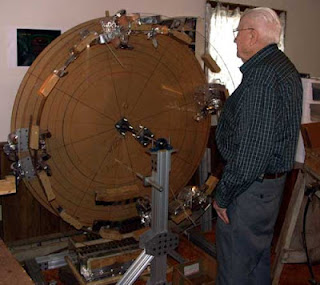 Perpetual motion is a scam on the laws of thermodynamics.   Fake review sites that purport to impartially review this are scams to the second power.


Back in 1979, a fellow named Howard Johnson convinced himself he invented perpetual motion, and got a Patent for his permanent magnet "motor" which he claimed would generate more power than it consumed.

Of course, it didn't.   In case you missed it, you can't get something-for-nothing.

(The Patent Office, at one time, tried to reject claims to perpetual motion machines, but the inventors just used those rejections as "further evidence of the conspiracy of the oil companies!" so they just gave up on that).

What tipped me off to this recently, was an internet advertisement (and we know that almost all of these are for bad-bargains, outright ripoffs, or whatever, and you should never click on them) mentioned this now 30-year-old hoax perpetual motion machine.

Curious, I opened a new tab and typed in "Howard Johnson Motor Scam" and several "review" sites came up on Google purporting to review the scam.   Foolishly, I clicked on one.

Immediately, a window pops up "Are you sure you want to leave this page?" with the Firefox boxes to "Stay on Page" or "Cancel".  I click "cancel" and immediately another page loads, and then a voice comes on the computer telling me about great bargains.

CNTRL-ALT-DEL and I dump Firefox in a hurry.  This is how you get trojans on your computer.  The so-called drive-by computer virus from rogue pages.

In case  you were late for class, here's the deal.   If no one could make "free electricity" from this motor in 30 years, no one ever will.   And no, no one is "suppressing the technology" or any such other shit.   Come on, I mean, please!

But what is interesting to me is not that scam, but the scam based on the scam - fake review sites about the device, which, when you load them, present fake cancel pages and then load alternate pages without your permission.   It is using a scam as bait for more scam.

It also illustrates how easy it is to set up a fake "review" web page on the Internet, and have many people "like it" on Google, so that it moves up in the rankings.   You can make it look like word-of-mouth is at work, when in fact, it is just the word of one mouth.

Increasingly, getting good data from the Internet is problematic.  Review sites have all sorts of bad data on them.  For example, someone decided to make an "Atlas Shrugged, Part I" movie, just before the last election.  Who is John Galt?  A horrible movie-maker.  Tellingly, no one has financed Parts II and III of this abomination.

Ayn Rand books don't lend themselves well to movies, anyway.  But this one was a particular stinker.   But to look at the rating on Netflix (4 stars!) you'd think it was a blockbuster.   Sadly, no.   Instead, a lot of Ayn Rand fans (and tea partiers, who somehow think her views represent their interests) got on there, and sight unseen, gave the movie five stars.

Parsing this is difficult.  But when you see a review where there are lots of five-star reviews and then a number of 1-star "this sucks" type, you know there is trouble.   If no one has an opinion in-between, then someone is lying, basically.

And that is a "legitimate" review site on Netflix, too!   But other sites can be similarly shilled or shouted down.   People vote their politics, or their wallets, online.   And you see this all the time on things like Trip Advisor, where a mediocre restaurant has stellar, yet vague reviews  ("Awesome!") that don't tell you much.  That review was likely put up by the restauranteur themselves.

In other words, you have to take much of what you read on the Internet with a grain of salt.  So much of the Internet can be shilled these days - Wikipedia in particular.

What is the harm in all of this?   Well, to begin with, when truth dies, we all suffer in the end.   This whole idea of "subjective truth" is just a smokescreen for bullshit.   You can jump off the Empire State Building and tell yourself that you are just saving time by not using the elevator.   But the hard reality of the sidewalk will come up to meet you, soon enough.  Bullshit cannot sustain itself, for long, whether it is the market for gold or condos in Vegas.   Reality eventually intervenes, and at that point, all the dreamers shout "unfair!"

So, all I can say is, spot the utterly fake review sites and avoid them.   And when you see a "legitimate" review site, consider the data with trepidation and parse it carefully.

The best reviews are real word-of-mouth from people you really know, and whose opinions you respect.  Anything else is basically suspect.
Newer Post Older Post Home