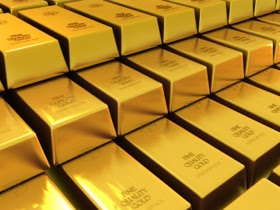 Keeping valuable things around the house is never a good idea.  In an era where people will steal the copper from your air conditioner, keeping gold around is a bad idea.


A friend of mine was burglarized the other day.  She is older and widowed and has some gold jewelry she collected during her world travels.  She rarely, if ever, wears any of it.

The burglars jimmied a sliding door after seeing her leave the house, and went right for the jewelry.  She kept it in her jewelry box of course, right on her dresser.  Easy to find.

Five or ten years ago, it was worth maybe a few hundred dollars - as gold.  It was worth far more as jewelry.  Today, the melt-down value is such that it is worth a few thousand dollars - and well worth stealing.

Could even have been the guy who knocked on her door last week and tried to sell her an alarm system.  Yea, they do that - burglarize a home in a neighborhood and then use FEAR to come back the next week and sell alarm systems.  Seedy business.

But even if not disconnected, a good burglar can go into a home, find the jewelry box, take the gold and be gone in a matter of minutes - which I suspect he/she was, even without a screaming alarm system to deal with.

Police departments, so used to false alarms, are slow to respond, and in any event, even at high speed, would take 5-10 minutes to get there.  You would have to hope the police just happened to be there when the call comes in.  And bear in mind there can be a 2-5 minute delay before the alarm company calls in the alarm.

A better idea is to not keep expensive stuff around that you are not using.  Like I said, she has this jewelry and never wears it.  So why not sell it?  Now is a good time to sell - the market is high and prices are high.  Sell it all and buy - well, buy something that you do want and will use, instead.

The sad thing is, of course, is that she will feel vulnerable and violated as a result of this burglary.  It is creepy to think of people walking around in "your" house when you are not home.  And that is the worst part of a burglary - beyond the lost goods involved.

And of course, it does make you paranoid as well.   You see some skateboarding teen punks at the 7-11 and they smile at you.  Are they being coy - and laughing behind your back?  Did they steal your stuff?  You have no way of knowing.  And this leads to bad thoughts.

It illustrates, also, why "Staying in the house" can be a bad idea for seniors.  In addition to the upkeep and maintenance of a home, it can be a scary and vulnerable place to live, when you are all alone.
Newer Post Older Post Home