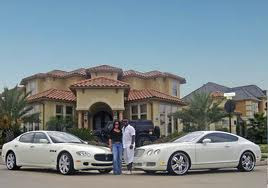 A lot of people in America think they are wealthy.  But if you derive your income from a salary, business, or other incremental venture, you are not really rich.  Real wealth is in owning money, not consuming or earning it.


A friend of mine is wealthy.  How wealthy?  Well, she has a net worth in the millions, which was mostly due to an inheritance.  She does not have to work, ever, ever, unless she chooses to.  Ironically, she often chooses to, which illustrates why work, for many people, is about more than making money.

Most Americans will never be wealthy, but will think they are, at one time or another in their lives.  Many middle-class, upper-middle class, and professional people think (or thought) they were wealthy by dint of their owning luxury cars, look-at-me houses, and other trappings of real wealth.

But since they were borrowing money to own most of this stuff, and were working at a job to earn money, they were not really wealthy, by definition.   It was not Real Rich, but Pretend Rich.

What is the difference?  To the outsider, the two may appear the same.   Both have fancy houses and cars, and whatnot.  Both live in swank neighborhoods and belong to the country club and go out to eat at the same fancy restaurants.

But the really rich people can afford to do this, and not have to work for a living.  And that is the definition of "wealth" right there - accumulated money, not cash flow.

The Pretend Rich?  Well, they have a good-paying job, but that is not the same thing.  They make the vaunted six-figure salary - or even seven-figure salary.  But instead of accumulating and investing this money to accumulate real wealth, they spend it - on houses, cars, boats, boarding schools, fancy restaurants, expensive vacations, and as a result, have no real wealth to speak of - just a huge income and huge expenses.  The are living the cash flow lifestyle which is just a pretend version of rich, not a real accumulation of wealth.

Now, if you are making a good salary, you can accumulate wealth and become really rich.  The sad thing, of course, is that for most folks, this can take a lifetime to achieve, so the end result is a nice retirement and maybe leaving some money to your ungrateful and lazy heirs.    But that is the nature of inherited wealth in this country - it takes on generation to earn it, and about five or six to squander it all away.

Wealth is not parked in your driveway, nor is it represented by your street address, what clubs you belong to, or what clothes you wear.  These are trappings of earnings, and oftentimes, ironically, the really wealthy eschew these sorts of noveau riche sort of things.  Only the people of the poorest taste engage in ostentatious display - or so was the thinking not to long ago.

To many folks today, of course, this is what they think of, when they think, "rich" - and our popular culture promotes consumption as a sign of wealth.

But real wealth is defined by accumulated capital, not squandered capital.  A man with a Lamborghini in his garage is not rich, if he is making payments on it - and everything else in his life.   If he has to get up in the morning and go out and hump to keep it all, he is not rich at all - just a poor person with nice shit.

But, the person who doesn't have to work - ever - because he has enough accumulated wealth to live off of, for the rest of his life, he is the wealthiest person ever.  And it doesn't matter if he has $500,000 in the bank and lives frugally, or has a Billion dollars and lives like a movie star.  The main point is, he has accumulated capital, is beholden to no one, and owns his own life, free and clear.

Everyone else is a slave.  Period.

And slavery today comes complete with bling-encrusted manacles.  Most Americans sell their souls for cable TV, a smart phone, and a Japanese luxury car - convinced that having these things, and continually paying for them, will mean they are rich.  The reality is, they keep working, keep paying, and never end up ahead of the game.

And when all is said and done, and they've worked themselves to the point of exhaustion and can no longer work, they will discover that they never were wealthy, but rather were running as fast as they could, in place, to keep up the appearance of wealth, to impress unknown others.

So, how do you become wealthy?  Well, there are two ways.  You can earn more or your can spend less.  And anyone in any income bracket can do this.   If you can learn to live on less money - to spend less and stop being attracted to the appearance and trappings of wealth, you can accumulate capital and eventually have enough to live without working - and thus have real wealth.

If you can earn more, so much the better, but don't count on it.  For most Americans, their earning potential is, alas, finite.  If you are a Nurse, Doctor, Welder, Engineer, or Lawyer, chances are, the most you are going to make is the average that a Nurse, Doctor, Welder, Engineer, or Lawyer makes.  There is no Billion-dollar payout for middle-class or upper-middle-class people.  But if you play your cards right and avoid the consumerist bandwagon, there might be a million-dollar payout - or at least a half-million.

Pretend Rich is a fun game to play - for a while.   But it is costly, and eventually you will have to quit the game.  Why?  Because eventually, your health will fail, your strength will ebb, your job skills will no longer be in demand.  And at that point - which arrives far sooner than we expect - you had better be in a position to live on your wealth.  Because the alternative is not pretty, let me assure you.
Newer Post Older Post Home