Why We Are Not Bees

You are not a bee.  Thinking with a hive mind is a survival skill for bees, but generally death for humans.
In a recent article in the Smithsonian (easy reading, at an 8th grade level, or 80-year-old level, like everything else they publish.  Be sure to buy some Gov't Gold and send money to Smile Train and get your Jitterbug phone!) they discussed how bees use the "hive mind" to make decisions.  It is an interesting article, in that it makes the connection between hive behavior (or swarm behavior) and our own Neural Networks that make up our mind.

Scout bees go back to the hive and dance a characteristic dance telling the other bees where a good hive location would be, or where there is nectar, or whatever it is bees think is important.    The more determined the scout is, the more aggressively he dances, sometimes butting other scouts on the head and even "beeping" to get them to go off and check it out.   When more scouts come back and dance frenetically, a group decision may occur - not a unanimous decision, but a consensus develops.

But over time, the dance gets weaker, so unless other scouts reinforce the message, no action will be taken.   And if the information is not as strong - a so-so hive location or maybe a crappy nectar supply, the scouts will dance with less enthusiasm, with their "vote" being cancelled out by perhaps a more enthusiastic scout.

At first, it may be tempting to take this data and apply it to your next conference-room meeting.   But it would backfire in a big way.  Consensus in humans often leads to least optimal outcomes - the Edsel, the Pontiac Aztec, the 2012 Honda Civic - all products of group-think and consensus, and all panned as bad compromises and poor thinking run amok.

You see, bees have no self-interest at stake.   No scout bee says, "Hey, this possible new hive location kind of sucks, but it would make me 10 minutes closer to my in-laws AND I own a piece of the real estate!  I'll dance more aggressively for this choice!"  So the bees don't have to "filter" out self-interest in decision-making.

In the conference room, on the other hand, people have all sorts of self-interest at stake, from empire-building ("If we close that factory, my personal empire in the company shrinks!") to emotional issues ("I never liked Frank, so I will vote against all his ideas") to corruption and blatant self-interest ("I get a kick-back from ACME supplies, so I will promote doing business with them!").

We are, it seems, not as smart or decent as bees.

But, since we have an amazing neural network right between our ears, we don't need a "hive mind" to survive, and in fact, in most cases, relying on a hive mind is often the worst choice in a decision-tree.  Leaders who seek too much consensus are often seen as weak and vacillating.   And we don't have time for each bee in the conference room to do its dance, head-butt, and beep.

And let's face it, some of us have opinions that don't really matter.  Or, as the article points out, people are averse to ideas that are introduced late in the discussion.  Or, if a meeting is ruled autocratically, ideas that have merit may be squashed.  What works for bees, fails for humans.

Don't rely too heavily on the hive mind, when making your own personal decisions, or even business decisions.  Group-think, for humans, usually leads to mediocrity at best, or disaster at worst.  The best business decisions and best products are often the work of a few dedicated people who have a singular idea - and don't rely group approval or acceptance.

Just because "everyone else" has a miles credit card, cable TV, a smart phone, or a payday loan, doesn't make these good ideas.  Rather they are just something that a lot of people are being conned into doing.  And yes, a lot of people can be very wrong about very important things.  Why?  Because we are not decent, honorable, and hard-working like bees, and as a result, our group-think is usually flawed.

Use your own neural net, between your ears, to think.  Don't rely on the hive mind! 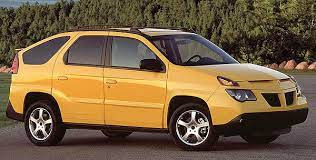 This is what happens when you let bees design cars.  And no, please don't send me comments telling me what a great car your Aztec was.  It was a piece of shit and it looked horrible.  Thankfully, most have gone to the crushers by now.
Newer Post Older Post Home