Would Dirty Harry Carry an iPad? 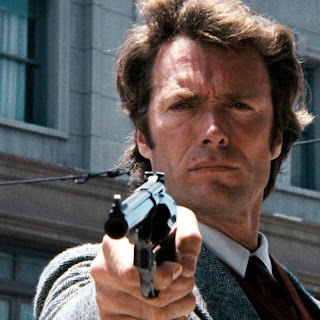 
The other day, I was at the local Irish Pub, and it was military day - 50% off on everything for military.   So, there were lots of people in there wearing camouflage.  The place just reeked of testosterone.

And in walks this guy carrying his new iPad.  And it struck me that it is really hard to look macho carrying one of these things.  It will be hard for Apple to market these things to the Culture of Belligerence crowd, I'm afraid.   Maybe if they put a loud muffler on it and monster tires?

Just a thought.   It is kind of hard to not look like a dork carrying any piece of computer equipment around.

The Nooze this morning reports, breathlessly, that the new iPad is going on sale today!  Wal Mart started selling them a 12:01 AM and lines are around the block!  Gee-Whiz, Oh, Golly!  Etc.

Like these stupid stories about checking the air in your tires that they put out every time the price of gas goes up, every time there is a new version of an Apple product, the media has to breathlessly report how the plebes are lined up for it.  Smashing their old versions ("useless piece of last year's junk!") while in line.

I mean, these stories are not stories at all, but poorly concealed product placements - advertisements posing as "news".  And they really aren't "news" when it is reporting the same thing, over and over again.

Yes, there is a new version of the iPad.  For some reason, people forget we went through this twice before.   And next year?  Yes, there will be another new version.   It's like getting excited about Windows 8.  What's the point?

In a way, it is marketing genius.  Back in the 1950's, the car makers had this level of panache with the introduction of the "latest models".  New cars would be sent to showrooms under wraps, and then placed inside, with the windows covered with butcher paper until the "reveal" date.   They generated hoopla, trying to get you to believe that the '56 Chevy was substantially different than the '55.

And people bought into it, until about 1959, when a major recession hit the car industry and people tired of "annual model changes" and planned obsolescence.

The funny thing about the story this morning on NPR was that they interviewed some dweeb standing in line for an iPad.  Shades of the interview of the guy pumping gas into his monster SUV when gas prices spike, no?  Anyway, they ask him what he will use his iPad for and he says, "I dunno, I guess answering e-mails and surfing the web."

Well, for about $200 less, let me direct you to the laptop aisle.  As if you want to do those two things, an iPad is probably a poor choice.    For reading an e-book, or using GPS, or other visual things, it is great.   But if you plan on typing?  Probably not a great choice.

But what was funny, to me, was that the person had no real use for the device.  There was a line forming, and he joined it.

If you missed camping out in line to get the "First" iPad 3, don't fret.  Next year, there will be an iPad 4, and you camp out in that line, and then sneer at all the people who are using "last year's model."

Just as the guy in the '56 Chevy sneered a the fellow in the '55.   Last year's model!  Peon!
Newer Post Older Post Home