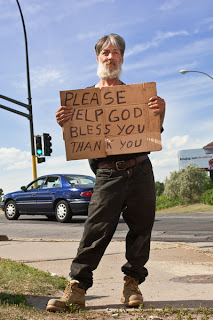 Why do beggars have the same come-on stories and same signs?  Do they all go to begging school?

I have written in the past about beggars and why you should not give money to them.  The simple reason is most are frauds - not needing any money but instead just using begging as a means of making a living or staying in a drug-addled lifestyle.  If you want to help the homeless, donate money, time, or materials to a homeless shelter or organization that helps the homeless. Giving people beer and drug money isn't helping them, but just making you feel better about yourself.

Today, something happened that made me realize this was very true.

At a gas station here in Savannah, a beggar comes up behind Mark while he is pumping gas and says, "excuse me, excuse me!" which scares the shit out of anyone.

Funny thing, though, the exact same thing happened to me in several other gas stations in several other States, all across America.   How is it these beggars all know to loiter in gas stations?  Why do they always use this "excuse me, excuse me!" come-on line and come up behind you in a creepy fashion?

It got me thinking.

Why do they all have identical signs with identical messages?  You've seen them all, they are all a variation of:

The last one is humorous and works well in vacation resorts where people are drunk.

So, do these folks go to begging school to learn this?  How do they know these same techniques to use?  Where do they learn the long-winded story about running out of gas (use a gas can as a prop) or your car being broken down.   And you were on your way to a job interview too!  Or AWOL from the Army base. Some sort of sympathy-generating story - it is a known technique.

According to some folks, many cults force new recruits to go out and beg for money.  This might explain why a number of beggars in different cities across the country use identical tactics, identical signs, and identical sales pitches.    But of course, cults don't account for all these creeps who harangue you for money at stoplights.

I think also that people who professionally beg for a living also network with each other and exchange ideas on what techniques work.  In other words, they learn from each other.

It is not that they are having seminars at the Hampton Inn or anything.  Far from that.  But you do see derelicts under bridges drinking and carrying on, and I am sure share with each other what techniques work - and what don't.  There is a bridge under an overpass where I-75 meets route 301 in Florida, and about  a half-dozen hang out under that bridge all day long, with each member manning the begging station in sequence.  Plenty of opportunity to network.

Beggars also migrate.  It has been documented that some go from southern tourist resorts (Key West, for example) to Northern Climes in the summer, to catch the tourist trade.   This is often aided by local Police who are all to happy to put a "homeless" person on a bus out of town.  But bus fare is cheap, and you can make a lot of money begging.  So migrating isn't all that hard to do.   You go where the money is, just like any good businessman would.  People are economic creatures, even broken-down derelicts.

But even that aside, Hobos and Bums have long been known to be migratory, so I am sure they must cross paths in their journeys, and hence all these begging techniques tend to gravitate toward "what works" at least at the moment.

Indeed, how else could this uniformity of begging techniques occur, on a nationwide scale?

If you think about it, if someone was truly "just evicted" and "lost everything" (except their Sharpie), they would not write out a sign just like so many other people's or spontaneously adopt a begging technique identical to others.  The law of probability denies that.   If you decided to go the begging route, your technique would differ from others.

However, if you were just made homeless, strictly due to economic conditions, likely you would not be wasting your time begging for money when you could be finding a homeless shelter, a job, and a way out of homelessness.  On the other hand, if you were a drug addict, these would be the last things you would do.

And that is the mythology of homelessness right there in a nutshell.   The loony Left wants you to believe that the drug- or alcohol-addled homeless person living under a bridge and cadging money at a stop sign is representative of the "homeless problem" in America.  The reality is, these sorts of folks have drug and alcohol problems as well as mental health problems, and often prefer the lifestyle they have adopted to seeking out work or trying to better themselves.

And it is a lifestyle they can sustain because enough people give them money and then think they are better than the rest of us because they did.  Indeed, these are the sorts of "I'm better than you" types who would decry what I am saying here as "heartless!"   But it is not heartless, just logic.  What is heartless is giving a crack addict more money to buy crack, instead of donating that money to a homeless shelter.

The folks who really are "victims of circumstance" are not coming up behind you at a gas station, scaring the crap out of you, and saying, "excuse me, excuse me!"
Newer Post Older Post Home