Why do some people put blue headlight bulbs in their cars?  The answer is a twisted form of status-seeking.

We are in Savannah, the big city, and it has been a while since we've driven in traffic.  So many people going so many places, so fast.  It is good to live on an island.   It is good to visit the city once in a while.

We see here, some poor people are still doing the fake blue headlight thing.  In case you missed it, about ten years ago or so, luxury car makers such as BMW or Mercedes put "HID" or "High Intensity Discharge" headlights in their cars.  They are basically arc lamps and they can cost a lot of money - $1000 apiece - to replace.   The gag is, of course, they are supposed to last "the life of the car" whatever that means.

But they made this bright white light, and you could suddenly tell a Mercedes or BMW from the plebeian makes, even at night.   And automakers love this sort of shit.  They used to fight a lot of safety standards when they came out, but then realized that one way you could tell a "new" car from an old one is the addition of some new federally required safety element.   And one way to get people to sell their old cars is to make them look obsolete.

The third brake light (CHMSL) is a case in point.  When those came out in the 1980's, you could suddenly tell a new car from last year's model.  And not surprisingly, auto parts stores started selling accessory third brake lights so that you could make your old clunker look like one of those fancy new cars, with an add-on light!

When cellular "car phones" came out, it was a status symbol to have a cell antenna on the back of your car.  If you had that little coiled antenna on your rear window, you were rich as you could afford to pay $600 for an analog car phone install.   Or that is what we told ourselves, anyway. 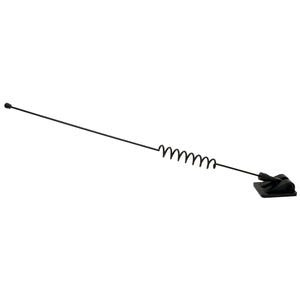 By the early 1990's, people were buying, for $9.99, fake cell phone antennas.  They would stick these on their cars and make it appear they had an "expensive" cellular phone.   Of course, the trained eye could tell the difference between the real deal and the fake ones.  The ones with no wire on the inside were clearly fake.  But it was an interesting way how people would seek status through fake status products.

But then a really weird thing happened.   In our Cargo Cult society, people started aping the cell phone antenna - and then took it to the next level.  They would buy two, three, four or more of these fake antennas and then plaster them all over the car, in a nonsensical fashion.   Then they started selling the antennas in colors - red, blue, white, or chrome or gold tones.  The pretense of these fake antennas being real was dropped entirely and a new form of ghetto status took its place.   The antennas were now admitted fakes, but still, plastering a number of them on your car was deemed "cool" in certain quarters.

The rest of us just shook our heads in wonder.  By the late 1990's, the fad had disappeared entirely.

In the early 2000's, as I noted above, the luxury carmakers started putting these expensive HID lights on cars.  They were not really better than regular headlights.  I had some on my X5 and I thought they were worse than the headlights on my Ford pickup.   But they told everyone you had a new car and a fancy car, just as these LED headlights and running lights today say the same thing.

But just as with the fake cell phone antennas, some folks wanted the "look" of expensive headlights, without the cost.  So parts makers coated their regular halogen bulbs in blue and sold them like hotcakes.  The problem is, of course, that real HID bulbs produce a white light, not a blue one.  So it is easy to spot the fakes.

But as with the fake cell phone antennas, people didn't care.  Just as the folks started putting ridiculous numbers of fake antennas on their cars - or colors that were never used by the real cell phone manufacturers, folks started putting colored headlight bulbs on their cars that were clearly not even attempting to mimic the HID look, but rather just be "different".  Bright blue and bright green seem to be popular.

Of course, as with the fake cell phone antenna fad (and the crown air freshener fad), the colored headlight fad is fading away.  And one reason is, I think, that the HID headlights turned out not to be very popular and are fading away in favor of LED headlights and LED running lights.

And like clockwork, the aftermarket accessory companies are offering fake replicas.  At Wal-Mart, I noticed in the "cheap auto accessory" aisle, a set of LED headlight surrounds that you can stick to your headlights with double-sided tape.  They operate off small batteries and you have to turn them on with a button.  Clearly not the real deal, but a crappy forgery.   But I am sure people buy them in droves.

What makes people - particularly people of the lower classes - buy crap like this?   Do they really think that we, of the upper classes, are fooled for a minute that their clapped-out Hyundai has a car phone, or HID lights, or came with a CHMSL or now has LED headlights?  Of course not.

The question is, are people of the lower classes fooled?   I think not also, as they have (or have access to) the same crappy aftermarket accessories.

I think instead, it is the aping of affluent culture.   It is a way of saying, "well, I can't have a nice fancy car like yours, but my clapped-out Hyundai is really almost as good, now that it has a coffee-can muffler and fake blue-bulb HID headlights."

And I suppose there is no harm in this, other than it is a waste of money by people who can least afford to waste money.  And things like blue-bulbs are actually less bright than regular ones and are arguably unsafe.  They are also illegal in most jurisdictions, so they are an excuse for the cops to pull you over and find the roaches in your ashtray.

But what I find fascinating is how people want to so desperately have  status and ape status.  For the very lower classes, it is easy to spot, as it is so ridiculous - like a poor woman trying to sew a ball gown from potato sacks.

But there is a lesson for the middle-class as well.  When we buy "status" goods, perhaps we too are being just as foolish - and wasting a helluva lot more money.   Buying a stripped $35,000 BMW 323i and then pretend they are in the same class as the fellow with the $100,000 7-series.  We buy stainless steel appliances and pretend it is a Wolfe Range or a Subzero Refrigerator.   We buy a mini-mansion and pretend we are Jed Clampett.  But we are not.  We are in debt up to our eyeballs, trying to ape the status of the upper classes.  And the upper classes are not impressed.