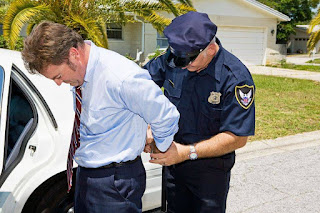 It is a raging injustice if you decide not to obey the law, not pay your tickets, avoid summonses, miss court appearances, drive without insurance, license, or registration, and just generally flout the law?  Or are your choices to blame for your situation?

A reader suggested an article and a youtube video about one of the latest (manufactured) "controversies" in the USA these days - the piling on of fines and fees for various misdemeanor violations, which can quickly snowball into hundreds of dollars and jail time.

Part of the problem, critics say, is the use of private collection agencies to collect unpaid fines, which result in rapid escalation of costs.  The reasons behind the use of these agencies are multifold.  The cost of collecting fees and fines is a significant burden to courts.  If people don't pay fines, it is hard to make them do so.  The only thing a Judge can do is issue a bench warrant, which then has to be served and the person arrested.   Police don't have the time or money to do this, so people are only caught if they are pulled over and someone does a "wants and warrants" on them.

The problem is, these folks skip court appearances or fail to pay what are fairly reasonable and small fines - at the beginning.   As the article notes, this snowballs into more fines and tickets, as they now start driving illegally.

We see this a lot in our area, which is an impoverished part of SE Georgia.   But the funny thing is, the poorer the person is, the faster and more recklessly they seem to drive - speeding, rolling stop signs, texting while driving, etc.

A friend of mine is a local cop and he describes a typical traffic stop.   An old Cadillac with a couple of Rastafarians in it rolls by, with clouds of marijuana smoke coming out of it, like a Cheech & Chong movie.  There is a tail-light out and the registration is expired.

They perform a Terry-type stop and ask for license and registration.   The driver has a suspended license due to unpaid speeding tickets.   Oddly enough, the passenger has a valid license (why didn't the passenger drive instead?).   There is a pot pipe in plain view in the ashtray.   The gentlemen are asked to step out of the car and in a search subsequent to an arrest, the marijuana is found in their pockets.

Why were they driving in the first place?  They got high, got hungry, and decided to drive 10 blocks to get a pizza.

You can argue the system is "unfair" but when you pick away at the corners of these stories, you find out that the person involved made a whole lot of bad choices all the way down the line.  They chose to drive too fast, too recklessly, or too stupidly.  They choose to ignore parking tickets, speeding tickets, or other citations.  They choose to drive without insurance, or on a suspended license, or with expired tags.  They choose not to fix that broken taillight or headlight, which gave the cops "probable cause" to pull them over.

And why did they choose these things?  Often drugs are involved - the person in question wants to buy drugs and not deal with their responsibilities to society.

Why do courts pile on these fines?  Because folks like this just keep getting tickets and not paying them.   They don't show up in court, they don't respond to citations - they are basically above the law, that is, until the law catches them and throws them in jail.

And these are not "debtor's prisons" as the article states.  Geez, more left-wing nonsense.  They are just jail, period.   If you can't pay the fine, you do the time.  30 days or 30 dollars - it is as old as the hills.  And yea, to people without 30 dollars back then, it sucked.  Today it is 300 dollars.  Inflation.

So, no, I don't see a huge injustice here.  Maybe these private companies need to be reigned in somewhat.  But to say that people don't  have to pay traffic citations because they are poor?   No, that would be a bad idea.   We would just be enhancing the outlaw class in our society even further.   Traffic laws that only the wealthy need obey?  That makes no sense at all.

People make bad choices in life and face bad consequences.  I know this because when I was younger, I made a lot of bad choices and paid a lot of speeding tickets - and had huge insurance bills - at a time in  my life when I could least afford it.   I made "poor" choices, and the system was designed to punish me for making poor choices.   Today, I make better choices.

And it is a funny thing, it has been a decade since I have gotten a ticket.   No real big mystery, I just stop for every stop sign, obey every speed limit, and make sure my car is registered, insured, and has working headlights and taillights.

Actually, I take that back, about five years ago, I did get a ticket because my State Farm agent (boo!  hiss!) cancelled the policy on my car by mistake.   The fine was pretty staggering (and has gone up since).   And for each subsequent ticket, the fine doubles - into the thousands of dollars.   I switched to GEICO and kept closer track on my insurance polices after that!   It was a big stick that the government will whack you with.

Why do they do this?  Because uninsured motorists are a huge problem in Georgia, and they want to make sure that people have a strong incentive to obey the law and get insurance.   And if people don't want to obey the law, they shouldn't be driving.  And if they decide to drive anyway, they should go to jail.   Because if we let them go with a $15 fine, well, they would just keep driving and think the occasional fine was just the cost of doing business.

The folks on the left who "feel sorry" for these folks breaking the law make the argument that "well, people need a car to get to work!!!"  and I love that argument as it is the same argument that suburban teens make to Grandma to get her to co-sign a car loan for a new Camaro.

Yes, having a car is awfully handy in this day and age, but whether one "needs" one or wants one is not always clear.

We have  a huge car carrier port here, where Audis, BMWs and Mercedes are offloaded.  They hire locals to drive the cars off the ship.   One local man does this, but does not own a car.  He rides his bicycle to work every day, and then spends eight hours driving some of the most expensive cars in the world, and then gets on his bicycle and goes home.  Why does he do this?  He doesn't want the expense of owning a car.

Here on our island, they are building a new hotel.  Some of the Hispanic construction workers walk ten miles each way to work every day.   The staff of other hotels is shuttled in a van.

The point is, owning a car and driving are privileges not rights.  And yea, it sucks if you don't have a car.   But the alternative - making driving a right and not a privilege and then allowing people to walk away from court appearances, fines, etc, is just not an option.

Again, if you peel away the layers on these stories, you find that the people involved did really dumb things - like not paying a small fine when they had the chance to.

It is like the guy who bounced a check at Dominos and got all bent out of shape when the collection fees and costs escalated to $750.   But whose fault is that?  If you don't want to be socked with a $750 bill, then don't bounce checks.  Like our Rastafarian friends above, he got the munchies and decided that, even though his bank account was nearly empty, sending out for pizza was a sound economic choice.   Hard to feel sorry for folks like that.  And yea, I use to do stupid things like bounce checks, too.   I learned not to do that, and the huge fees involved were one reason I learned this painful lesson.

And that is what is telling about ALL of these "injustice" stories - the reporter fails to go into detail about how the "victim" got to where they were.   They "failed to pay some parking tickets" we are told, but what is not told is the missed court appearances, the failure to respond to subsequent notices, etc.  By the time they are threatened with jail, the $25 parking ticket is now $500.   And this cost our court system well over $1000 to prosecute.

No, they are not "making money"  by putting people in jail (which costs the system even more money).  Rather, they are trying to get an entire class of people who just IGNORE THE LAW to pay attention to it.

While it may seem like an "injustice" to make people pay their traffic fines, prevent them from driving with no insurance or on suspended licenses, it is an even greater injustice to just let people off the hook for fines, to let them drive without a license, registration, or indeed, even insurance.   Why should the rest of us obey the law if a new class of impoverished people get a free ride?

There are two sides to the story here.   People need to be responsible for their actions.   When I was young, reckless, and stupid, I was punished by the law.   And I had to pay my fines and pay the insurance rates and risk losing my license.   Why is it today we somehow want to give people a free pass?

It makes no sense at all.   Increasingly, it seems, more and more people want to take what little responsibility is left in our society and abolish it.   Let everyone "do their own thing" regardless of how it impacts others.   And if someone wants to break the law, well they are the victims not the people affected by their actions.