Under the proposed Religious Freedom Act, companies can refuse service to anyone, if they can claim a religious belief compels them to do so.  How would this work?
(Mockup of proposed sign under the new law)

Many folks have a lot of questions about the proposed "Religious Freedom Act" that is currently in the Georgia Legislature. Similar bills have been proposed or passed in Indiana, Michigan, Oklahoma, and other States.

1.  Why are these laws being enacted?   Good Question.   All across this great land of ours, thousands, nay, tens of thousands of florists and bakers are being forced by government storm troopers to bake gay wedding cakes or make floral arrangements for gay weddings.   Gay people are intentionally selecting Christian businesses so they can "flaunt" their gayness and "force" Christians to accept their deviant lifestyle.   Those who refuse to bake these cakes or make these floral arrangements are sued out of existence and left homeless and destitute.

2.  Can you give me an example of someone who was sued and forced to go out of business for refusing to bake a cake or make a floral arrangement for a gay couple?  I'll get back to you on that.  But two bakeries in States with anti-discrimination laws were brought before a Commission or an Administrative Law Judge and forced to make gay cakes!  Can you imagine the indignity of having to write "Good luck Steven and Jim!" in icing?  Surely they will now go to hell!   Because, as everyone knows, without a cake (or a floral arrangement) you simply cannot get married!

3.  How would the law work?  What constitutes a religious belief?  Say for example, you are part of the "Christian Identity" church.   This church, as part of its core beliefs, believes that white people are superior to all other races, and moreover that all other races are "mud people" who should be exterminated from the earth.  The same goes for Jews and Gays.   Thanks to the religious freedom act, they no longer have to serve "mud people" in their places of business.   They can simply put up a sign saying, "No Jews, No Blacks, No Gays, No Colored".

4.  Well, suppose I run a chain of barbecue stands, and I want to take money from Blacks and Jews, but don't want them mingling with my white customers?   No problem, so long as this is a strongly-held religious belief.  You could simply set aside a different area to serve these customers, with a sign saying, "Colored out back".

An example of a sign in compliance with the Religious Freedom Act.


5. That sounds fine and all, but how do we keep the Jews and Queers and the colored folks from sneakin' in?   Good Question.  One proposed amendment to the bill would provide stiff fines or jail sentences for anyone attempting to breach the color barrier or other religious barriers.  So for example, if a Jew comes into your store, even though you have clearly posted a "NO JEWS ALLOWED" sign in compliance with the act, at the front of your store, and then he lets slip an "Oy Vey!" you can call the police and have him arrested. 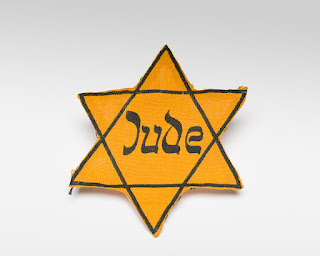 Cheery and easy-to-spot badges will be required for minority groups whose existence may offend some Christian sensibilities, in order to prevent them from "passing" as Christian and White.

To better identify Jews, Gays, and "high yellow" Negros (as well as Muslims) who may attempt to "pass", one amendment to the bill proposes that such minority groups be forced to wear clear identification badges, so that they can be easily spotted for what they are (the spawn of Satan) and Christian business owners can more readily deny them service at their place of business and moreover have them arrested for violation of the act.  Jews would wear a star of David, Gays a pink triangle, and so forth.   Apparently, this has been tried before and shown to be effective.

6.  That sounds fine and all, but what about other businesses?   That's the beauty of it.  There is no limit to how far the act can go.  You run a hotel or a motel?   No reason you should be forced to rent rooms to Negros or Faggots, not when there are good, white, God-fearing Christian customers who would be offended by the presence of such folks.  There is no reason you should be forced to repair a car, cook a meal, build a house, or perform any other service or supply any type of goods to people whose very existence offends your core religious beliefs.  You have carte blanche to discriminate, my friend!

7.  But we only accept MasterCard and Visa.   Nevermind.  It's just an expression.
8.  How would this apply to me as an employer? The act would also allow you to discriminate in employment, too!   All this EEOC nonsense can go right out the window.  When hiring, you can put "No Blacks need apply!" or "No women need apply!" if your religion so dictates (many Muslims are on board with regard to this latter provision).

9.  How would this apply to me as an employee?   Ahh, that's the beauty of it too!   You could apply for a job as a meat inspector at a pork sausage factory and once you get the job, you could claim religious objections to inspecting pork (as being non-Kosher or not Halal) and get paid to do nothing.  Or you can run for town clerk, and then refuse to grant marriage licenses to Lesbians, even though you knew it was part of the job from the get-go.  Needless to say, this aspect of the Religious Freedom Act is a little disturbing to some Republican employers, and the act may be modified to only allow Christians to assert their "strongly-held religious beliefs."  After all, we can't let Islamists or Jews take advantage of this act, can we?  That would offend our strongly held religious beliefs!

10.  Well, what about reverse discrimination?  Could my wife still get her hair done by "Mr. Paul" even though I threw him and his buddies out of my restaurant?  Could those minority groups discriminate against us God-fearing Christian white folks?   Well, as we all know, most of these people are devil-worshiping atheists anyway, and thus they cannot claim their religion forces them to discriminate against Christians.  So relax, your wife can still get her hair done and go antiquing.

OK, so that parody was a little over-the-top.   But then again, claiming "religious discrimination" because you are forced to write two women's names in icing on a cake is a little over-the-top, too.   Claiming "religious discrimination" because your floral shop is forced to make a floral arrangement for a gay wedding is not only over-the-top, but frankly, quite implausible.   Heterosexual florists?  I suppose they exist.  And if they did, I would suspect they end up knowing an awful lot of gay people.  But why would a gay couple seek out the Christian florist?   And how does the florist know the flowers are going to a gay wedding?   It all sounds so farfetched and trivial.

(BTW, If there are any gay couples who are intentionally seeking out Christian bakeries, florists, wedding photographers, just to "make a point" then shame on you!  Intentionally antagonizing people is just dumb, and it makes no sense to engage a business that is hostile to you, when there are other businesses around.  Vote with your dollars, unless they are the only business in town).

But the question remains.   Do we really need a law about this?  And moreover, how would the law work?  Would people be allowed to put signs in their shop windows saying they refuse to serve certain customers based on religious beliefs?  Because you know, if they could do it, some people would.

And where does it end?   If one person claims that serving gay people violates their freedom of religion, who is to say that serving minorities, blacks, women, Jews, Muslims or whatever is not a violation of theirs?   The Christian Identity Church has, as part of its core beliefs, racism.   And it is well documented that some Muslims do not believe that women should be allowed to leave home without a male present, and should be covered with a veil.  So does the Halal grocery store get to put up a sign saying, "No Shoes, No Shirt, No Veil, No Service"?   They could argue this is a core value of their religious beliefs.  Why would that be "ridiculous" but baking a gay wedding cake be legit?

But more importantly, aren't these sorts of laws just pandering to a certain base (in every sense of the word) support group of the GOP?   Like the "War on Christmas" the far-right is creating a crises that simply doesn't exist, and then using this as a "wedge issue" to divide our country, pit one group of people against another, and just create a lot of ill-will and bad feeling.

But perhaps most important of all, is this just the nose of the camel under the tent?   If we go down this road of making exceptions to public accommodation laws, where does it logically end?

So maybe my bit of parody is not so ridiculous or over-the-top after all.
Newer Post Older Post Home