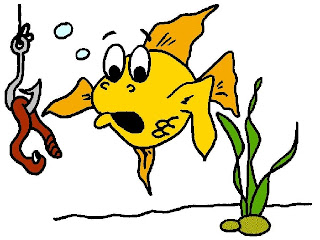 They say a goldfish grows to a size proportional to the tank he is living in.   In a similar way, do we increase our discontent to accommodate our environment?   Or put another way, are some people never happy?


Once upon a time there were two goldfish living in a fishbowl, named Larry and Jerry.  Jerry was a pretty happy-go-lucky goldfish with an optimistic view of life.  "Hey Larry!" he'd shout, "what a great fishbowl we have!  I can see out the window of the house!  Oh, and wait, here comes our owner with some fish flakes!  Yea!!! FISH FLAKES!!!"

"You're a fish flake," Larry grumbled, "This fishbowl sucks.  It's too small, and our owner hasn't changed the water in a week.   And those fish flakes are from Wal-Mart and they probably have melamine in them and they taste stale!"

But Jerry wasn't listening.  He was munching on fish flakes and smacking his fish lips and humming to himself.  "What an idiot!" Larry thought to himself, "He can't see the utter vileness and corruption of the world.   Here we are fish, and trapped in a bowl!  What kind of life is that?"

A few weeks later, when their owner was changing the water, Larry and Jerry were poured into a new bowl.  This one was larger and had gravel on the bottom and a small ceramic castle as decoration.   "Wow!  This is neat!" cried Jerry, "Did you see this Larry?  We have our own Castle!"

"Big Freaking deal," Larry replied, "It's probably made in China.  And we still have the same crappy fish flakes to eat."

But Jerry would not be deterred.  The castle had an arch in it, and Jerry could swim through it, doing loop-de-loops all day long.  "Hey Larry!  Look at me!  You should try this!  Whoo-hoo!" Jerry said.  But Larry just shook his head and stared out the side of the tank, wondering why it was that his life sucked so badly.

Months later, Larry and Jerry were transferred to a big, new aquarium.   It was long and rectangular, and had lots of colorful gravel on the bottom.  Their castle was there, along with a plastic diver who made bubbles.  Best of all, the tank was heated and had a filter system, along with a light at the top.

"Boy howdy!" Jerry exclaimed, "We've hit the big time here!   Look at the size of this place!   And heated water!  We're living like kings!"   And as if it couldn't get any better, their owner sprinkled a new kind of fish flake in the tank - one far tastier than the one before.   Jerry was in heaven!

But Larry just grumbled and pointed out imagined flaws in their new digs.   Everything was made in China, he said, and hurting our foreign exchange and putting people out of jobs.   And the new gourmet fish flakes were just ostentatious.   No, according to Larry, the new aquarium was certainly no improvement over their good old reliable fish bowl!

"But you hated that fish bowl, remember Larry?" Jerry asked.  "You said the water wasn't changed enough and the fish flakes were stale!"

"Well, maybe, but this is even worse, it is too upscale!"

Jerry just shook his head in disbelief and swam some more loop-de-loops through their ceramic castle.   He knew his friend Larry would never be happy.

Larry and Jerry grew old and fat and expanded to the size the aquarium would allow.   Jerry continued to be optimistic and happy.  Larry continued to grumble and be miserable.   One day, Larry flopped over on his side and floated to the top of the tank, having had a fish heart attack.  The last thing he said to Jerry was, "That's how life is, Jerry.  Someday you will realize it.  Life sucks, and then you die."  And with that he passed away.

Jerry felt sorry for his friend.  "Poor Larry was never happy.   No matter how much better things got, he was always convinced they weren't good enough.   He could never appreciate the moment or appreciate things for the way they were.   Maybe our life in a fish tank isn't perfect, but it could be a whole lot worse - like being in a Piranha tank, for example.    Oh, well.  Hey, more fish flakes!!!  Yea!"

Jerry and Larry are real fish.  Their names and species have been changed to protect their identity.   Actually I know a lot of Larrys in this world - far too many in fact.   I know damn few Jerrys.

I was at the club hotel the other day.  Every Wednesday is happy hour, with drinks at half-price.   Not a bad deal, to sit in the lobby of a beautiful historic hotel, take in the view of the water, and talk with friends over a drink.    And they serve free hors d'oeuvres.   Nice fish flakes!

But I met a Larry there.   He bent my ear for an hour about how rotten everything was, how corrupt and evil the world is, and how bad our little island has become.   I gently tried to correct him, steer him in the other direction.  Point out that the fish flakes are pretty tasty.  But he would have none of that.  He wanted to be miserable and commiserate with others.

Sadly, our little island is full of Larrys.  They pick and point at every imagined flaw (and they are imagined) or decry anything that is done that is not the way they would have wanted it.   They can never just accept things as the way they are.

And the Larrys of the world think the Jerrys of the world are all idiots.    Yes, I have been told, by people barely 10 years my senior, that I am just naive and stupid for not appreciating how corrupt and evil our island administration is.   After all, they are putting beach chairs - get this - on the beach!  Oh, me, oh my, what will come next?   Dogs marrying Cats?

But of course, it goes beyond our little island.   Chances are, you know a lot of Larrys, too.  Maybe you are one yourself.   We all are, at times.   It is helpful sometimes, however, to put your problems in perspective and realize that life is pretty decent, if not obscenely luxurious, for folks like us.

And by that, I mean folks like you, who have access to a computer and can read and write English.   Odds are, you are in the top 50% in terms of income for the planet.  If you live in the USA, even on welfare, the top 10% if not higher.   And odds are, if you are an American, you are overweight, if not obese.  You have it pretty good, so stop complaining.

And yet we complain.   Our government is no good.   Our corporations and institutions are corrupt and evil.  Successful people are bad.   We convince ourselves that the most prosperous and successful country on the planet - one that allows the most amount of freedom and wealth for the largest number of people - is somehow so fundamentally flawed that the only solution is the end times, survivalism, or a coup d'etat.

And people seriously believe this.  They get up every morning complaining from their first breath until they go to bed at night.   They make themselves miserable, and for what?

Yes, arguably this is a mental health issue - namely depression.   Most people are depressed it seems.   But I firmly believe, as I have stated before, that mental hygiene is like personal hygiene - you have to work at it.  If you let yourself think negative thoughts and engage in negative thinking, you can literally make yourself depressed and sick and even die.

It isn't wrong to say, "You know, things are not all that bad."  No, it really isn't.    You'd be surprised, however, at the strong negative reaction you'll get when you say that to other people.  Depressed people despise happy people - and yet are drawn to them.   If you are happy, you'll have no shortage of friends, trust me.  In fact, you will find people trying to attach themselves to you like a remora to a shark.

If you listen to a lot of people these days, they will tell you how rotten they have it.  Young people will decry how much debt they have - as if it were some natural phenomenon that "just happened" to them.   Old people will tell you how awful the economy is, even though it is chugging along quite well, and in fact, is doing better than most of the rest of the world.

Activists will bore you to death with perceived injustices - but when you scratch the surface of them, turn out to be less injustices and more people doing stupid things, like taking out payday loans or fighting with the police.

Even if you lived on a beautiful resort island.   Maybe especially so.
Newer Post Older Post Home