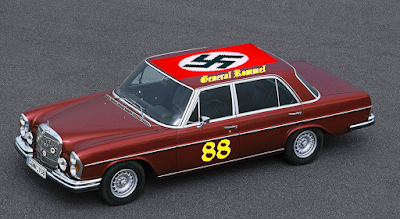 It's all about Heritage, not Hate, right?   Maybe not.


Stuttgart - the German ZDF network announced today they are launching a new television show, the "Dukes of Saxony" - an adventure/comedy program featuring two strapping young Aryan youth, 'Dolf and Einrich Gefährlich, who travel the back roads of Saxony in their hopped-up vintage Mercedes 6.3 sedan, affectionately named "The General Rommel" - whose horn plays the first few bars of Deutschland, über alles.   Adorned with a Nazi flag on the roof and the "Heil Hitler" number 88 on the side, the vehicle honors the sacrifices of German soldiers who fought for "the lost cause" in World War II.

Of course, since the use of Nazi symbols has been outlawed in Germany since World War II, the show is causing some controversy over the use of Nazi imagery.   However, co-star Ben Dover, who plays the part of happy-go-lucky towtruck driver "Plätzchen" - and who runs a gift shop selling "Dukes of Saxony" merchandise, had this to say about the controversy:

"I think all of the German Nation understands that the Nazi flag is the symbol that represents the indomitable spirit of independence which keeps us 'makin' our way the only way we know how.'

That Nazi flag on top of the General Rommel made a statement that the values of rural Germany were the values of courage and family and good times.

Our beloved symbol is now being attacked in a wave of political correctness that is unprecedented in our nation of free speech and free expression. Activists and politicians are vilifying German culture and our heritage as being bigoted and racist.  We know that this is not the case.  And we know that in Germany, there was never any racism.

Though the Nazi flag has been removed from such places as the Reichstag and the Brandenburg Gate, it will never be removed from any of our Plätzchen's stores and museums.  We are all the same good people today that we were last week and last year and we are not going to be shamed into turning our backs on our heritage and our convictions.

We are not racists. We despise racism and bigotry. and we think the people who are creating this 'cultural cleansing' are the real bigots in this story.

When we say our flag stands for 'heritage, not hate' and 'pride, not prejudice', we mean it.  And we believe that old saying, 'you can't know where you are going if you forget where you came from.'


Pretty Ridiculous, no?  And yet the quote above is taken directly from former actor Ben Jones, who played a minor role in the Dukes of Hazzard series (but is listed as a "star" in articles quoting him).   Yes, I changed "the South" to --Germany--  and "Confederate Battle Flag" to --Nazi Flag--.  But that's about it.

The most ridiculous thing in the original Ben Jones quote is this:

"And we know that in Hazzard County there was never any racism."

Well, since Hazzard County is a fictitious place, I guess he has us there.   Problem is, the fictitious Hazzard County is supposed to be in Georgia, and Georgia was and is rife with racism.  This is a State with a history of slavery, Jim Crow laws, the KKK, and of course, lynchings - about 450 in Georgia alone.

The Civil war killed more Americans than every other war America has been in, combined.    The Germans enslaved Jews, Slavs, Poles, and others, forced them to work long hours for no pay, and then exterminated them at will.  Southerners did the same thing to Blacks.

And long before there were the horrors of Auschwitz, those lovely Confederate "heros" invented the horrors of Andersonville and other Civil War Concentration Camps.   The "Southern Gentlemen" of the Confederacy showed their real gentlemanly colors there.

And let's face it, the folks claiming this "heritage" are about as far removed from it as I am.   Yes, my great, great, great grandfather, Colonel Robert A. Thompson fought for the "lost cause."  And yes, he was a slave-owner of some magnitude, having his own plantation in Alabama.   When the war was lost, he moved to Texas and started over.  My racist Southern relatives (and yes, they were and are racist) waxed poetically about how lucky those slaves were, and how they loved the Colonel so much - that they followed him to Texas.

Of course the reality was, if they didn't follow Col. Thompson to Texas, they likely would have been swinging from a tree in short order - as so many did.

And that is one reason why the Civil War really isn't over.    Long after the hostilities ceased, the covert war against Blacks in the South went on - for another 100 years.   The KKK peaked in popularity in  the 1920's.   Lynchings were regular occurrences until after WW II.  Segregation was around until 1950.   And young civil rights workers were being murdered in the 1960's.

Today, these symbols are flouted on the excuse that they "honor the courage of the fallen" - but we all know they are just a continuation of this underground war.   They are a way of intimidating the majority with the will of the minority - those bigoted and racist elements in our country who feel that "but for" the "special rights" given to racial minorities, they would all be rich.  (Oddly enough, racial minorities don't seem to be cleaning up on these "special rights" very well).

In Germany, they passed laws against the display of Nazi symbols.   We, of course, have different ideas about free speech.  It is written into our Constitution.    Mr. Ben Jones can "fight them on the ice" all he wants to, but he will find no one there to fight.   He has a right, in our county, to sell "Dukes of Hazzard" accessories, provided he has the licensing rights to do so.  No one will stop him.

So his brave words ring very hollow - and sound more like those of someone who wants a lot of free publicity for his "Cooter Museum" which frankly, you and I never heard of until now.

However, we, as a nation do have the right to decide what symbols will be on our State and National flags, on our license plates and whatnot.  And if the majority of people in a State vote (through their representatives) to ditch these hateful symbols, that is not a "suppression of free speech" or any such nonsense.

And if major corporations like Wal-Mart or Sears decide that displaying KKK accessories is bad for business, they have a right to do so, just as they might decide that perhaps, well, I don't know, selling Nazi regalia might offend some of their customers as well.

Once again, we have the far-right claiming to be nailed to the cross, when in fact, they have little more than a splinter in their finger, if that.

What is sad, is that in response to the shooting of nine people in Charleston, we still can't have a discussion on how to keep guns out of the hands of the mentally ill, such as the young man who committed this crime, the one in Aurora, or the one in Connecticut.  That is off the table.

Removing the Confederate Battle Flag and other symbols of the KKK seems to be sort of the booby prize, a stalking horse, if you will, for the real issues involved.