Why White Supremacy is Obviously Wrong (And What Causes It). 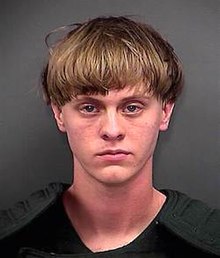 The fundamental problem with white supremacy is that the people who promote it are the worst examples of the white race.   If white people were "supreme" over other races, then there would be no losers like this around.


White supremacy in the news again, sadly, this time as part of a mass-murder.  There are other factors involved, of course, and I suspect we will find out in short order that mental health was a real factor. That and parents who think buying their mentally ill son a handgun is a swell idea.   And what's with the weirdo Justin Beiber haircut?  The kid in Connecticut had the same 'do.   Weird.

I have been reading Gore Vidal's Empire series of historical novels, and he makes the point, with regard to the McKinley assassination, that when people, particularly in the media, start saying things like "kill the President" that some nutjob will take this as a cue and actually commit the act.  William Randolph Hearst, the newspaper magnate, published in his papers, calls for the President to be assassinated.  After the assassination of Governor William Goebel of Kentucky, Hearst published this nasty little couplet:

The bullet that pierced Goebel's breast
Can not be found in all the West;
Good reason, it is speeding here
To stretch McKinley on his bier.

And that was all it took to set off a self-styled "anarchist" to finish off the job.   People like to believe in conspiracy theories.   I say it doesn't matter.  You put up the hate talk, and these nutjobs, like little windup dolls, go off to do your bidding.   Such was the case in Dallas in 1963.  But I digress.

White supremacy is, of course, a classic example of weak thinking and externalizing.   And that is why white supremacists are usually unemployed or underemployed losers with a chip on their shoulder.   The problems they face in the world, they believe, are not due to their inherent stupidity, laziness, lack of discipline, or other personal faults.   No, no, it is the black people who "took their money away."

It is funny, but you never see smart people or successful people become white supremacists or "sovereign citizens" (a closely related, if not overlapping phenomenon).  People who have their shit together don't need to find scapegoats for the problems in their lives.  And the reason for this is simple: People who have their shit together address their own problems and try to solve them rather than externalizing them to unseen others.

Externalizing your problems never solves them, but in fact, makes them worse.

Thus, externalizing is an appealing belief system to weak thinkers and lazy people.  Blaming all of your problems on external forces, such as minorities, has such classic appeal - nothing you have done is wrong.  No, you are a good person!  It is those bad people who made your life miserable.

And this is why the Nazi philosophy appealed to criminal elements and lower classes in Germany - who first took up the banner.   And it is why a high school drop out, in trouble with drugs and the law, might take the easy way out and blame all his problems on blacks.  It is cowardice and an utter lack of character.

But where would a kid like this even get such ideas?  Well, if you scour some of the less savory portions of the Internet, you'll find racism and white supremacy alive and well.  In the olden days, if you wanted to find "like minded" race-haters, you either had to live in the South (or South Boston) or subscribe to some sort of newsletter or something.  It takes a network of hate to spread and reinforce bad ideas.

On the Internet, you don't have to look far.  Reddit, the "front page of the Internet" and owned by Conde Nast, had "subreddits" called "Coontown" and "Watching N*****s Die" which are pretty self-explanatory.  The first is just a virulent racism, repeated over and over again - young white men sharing and reinforcing their racist views.

The second is nothing but links to videos of black people being killed.  Gee, the Internet is really fun, ain't it?  And you let your children use it?

And I am sure that when they get done searching this young man's computer, they will find links to all of these sorts of sites.

So that's all it takes.  A mentally ill young man, easy access to guns, and a whole lot of really bad ideas  repeated over and over again.   And like a little wind-up doll, some nutjob will listen to all this nonsense and then take it seriously and then go off killing people.

Of course, there is often more to it that that.  There are people who are not mentally ill who engage in race-hate crimes.  One horrific example is a group of white teenagers from Mississippi, who made it a habit to drive to black neighborhoods and beat up unsuspecting black folks. They did this several times, and were never caught, and emboldened, ran over a man one night and killed him.

Again, bad ideas reinforced by the peer group, and anyone who has teenagers or who has been one, knows how this works.  Young men in particular, will egg each other on, and afraid of being called a "sissy" or whatever, people go along with it. When you set certain social norms or normative cues, then people act accordingly.   And it is frightening how easily "normal" people can be manipulated in this manner.

(And this is not necessarily a racial thing.  Google "teens kill homeless man" sometime and see the results - it goes on for pages.   This is such a popular thing to do that Jon Stewart actually joked about it, which I find in bad taste.  Apparently the baseball bat is the weapon of choice.  A few decades ago, there was a similar trend, but the target was gay men.)

So what could we do?  Well, for starters, maybe institutionalize schizophrenic young men and try to help them, rather than give them guns and a computer and let them do 'whatever' as was the case in Connecticut, and I suspect in South Carolina as well.  And maybe not letting your teen kids run wild in packs is another good idea, as well.

And maybe premiere publishing companies like Hearst or Conde Nast shouldn't be propagating hate in newspapers or on the Internet.   After the McKinley assassination, Hearst was widely blamed for the act, and in fact, it put an end to his political ambitions.  Where is the blowback for Conde Nast?  Oh, right, they "spun off" Reddit as an "independent entity" while at the same time owning the majority of the stock in the new company.

Of course, some would cry this is "censorship" - but is it really?  Historically our society has policed what is deemed acceptable by means of social pressure. And maybe if more people put social pressure - or financial pressure - on Conde Nast, they would shutter the more racist elements of Reddit.   Perhaps we should boycott advertisers in Conde Nast publications until they see the light?   Perhaps.

Others would note that doing this would just "drive it underground" which is, of course, where it should be.  When something is not so readily available, and is deemed shameful and awful, then at least there is a social stigma attached to it.  We have successfully done this with child pornography, which until a couple of decades ago, was freely available in places like Times Square, and legal in countries like Sweden and Japan (in Japan until last year).

It is funny about the Internet.  We "shame" people all the time for saying the wrong thing on Twitter.  But if you want to wallow in racist crapulence, it is all there, online, sponsored by and owned by, major media outlets.

UPDATE:  It only took a few years, but Reddit decided finally that racist subreddits have to go.  No more "coontown".   What took so long?
Newer Post Older Post Home