Next on the Liberal Agenda: Wasting Food 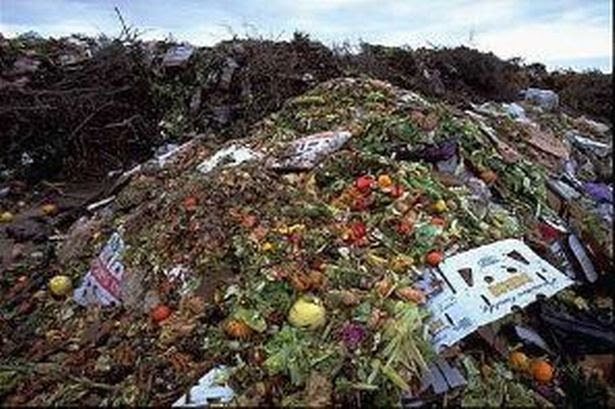 When a topic suddenly becomes popular on several media sources all at once, it isn't by accident, but by design.  This week, the liberal media has decided that the "talking point" is "food waste."  Who decided this?


In the last few weeks, a trend has been emerging in the media: stories about food being wasted.   First we are treated to a story from France, where a new law requires restaurants throwing away food to donate it to a food bank or homeless shelter.   How this is to be enforced is anyone's guess.   Dumpster Police?

Today, we hear on NPR (and later tonight on PBS) about how America wastes so much food and what a crime it is to "waste good food!"

Now if you are an emotional idiot, you've already gone off the deep end on this, without even thinking.  "Food being wasted!  That's a crime!"

Well, first, realize you have been baited and baited big time.   Food is one of those Pavlovian response things that marketers and media types know that will get an emotional reaction from you.   And the reason is simple:  we all need food to survive.   So if you tout "free groceries" as a come-on promotion, you get the plebes salivating.   Talk about "perfectly good" food being thrown away and you have the plebes up in arms!

By the way, two other Pavlovian response things are free gas and suitcases full of money.   If you want to fleece the plebes of their every last cent, offer then a penny off on gasoline, and they will bite on it.   In every action-adventure movie, there is usually a scene where someone opens up an aluminum briefcase full of hundred-dollar bills.   Or they are throwing piles of (ill-gotten) money on a bed - that is another trope.   The plebes love this shit - they eat it up.

So if you want to tug at emotional heartstrings, use one of these gimmicks to get at people's cerebral cortexes - and bypass any logical thinking.

The truth about the food business is that yes, food gets thrown away.  Most of it is food gone bad that would kill people if it were served.   Others are food that is just not salable - stale bread and whatnot.   But good food?  Most food businesses use it.

For example, if you go to a salad bar at the grocery store, odds are the "croutons" are yesterdays leftover bread, cut up and toasted.  The salad greens and tomatoes were carefully picked from the about-to-expire fresh produce.   Those packages of "fruit salad?" - fruit that was about to go south.   It is all packaged up and sold - perfectly healthy food - and thrown away if not sold that day.

Sadly, however, there are instances were some food gets tossed.   As I related before, when Mark ran the gourmet store, they threw away leftover baguettes and pastries that could not be sold because they would be stale by the next day.  He tried calling food banks and homeless shelters, but they required that the food be delivered (which would mean paying a driver overtime) and also that the food provided be of uniform quality and quantity.   In other words, they didn't want odd-lots of inconsistent size of assorted artisanal breads.  They wanted 100 loaves of white bread, delivered every day by 5:00 PM.

In other words, to donate food, the company would have to make the bread to donate and set it aside.  The homeless shelter didn't want "leftovers."

Why is this?  Well, they have 1,000 people to feed, and they need a relied-upon quantity of food every day.  Also, the bums clients would get upset and start knife fights if one bum client got rye bread and another got wheat.   Yea, you have to respect the homeless and they get to choose what they get to eat.   In America, it seems, beggars can be choosers.

Moreover, there is a liability issue in that if someone claimed to get sick from donated food, the company could be sued.  Restaurants have to deal with allegations of "food poisoning" all the time (most are bogus, unless a score of people fall ill at the same time). But at least they are dealing with paying customers.

So what to do with the food?   You could try handing it out to local homeless near the store, packing it up in bags.  Problem is, this ends up attracting a line of homeless people at your loading dock around quitting time - which the City would not be to happy about, and the customers neither.

Even throwing the food in the dumpster is problematic, as then "dumpster divers" go in and get it, and again, you have a homeless encampment behind your restaurant.  And that is why many restaurants and stores destroy food before throwing it away.   Letting someone dumpster-dive behind your restaurant is only enabling their street lifestyle.   And if you believe that homeless people are "just like you" but "down on their luck" you are terribly naive.  They need help - an institution, not a free meal and spare change.  But that is another topic.

There are, of course, easier and better ways to feed people.   And in the United States, we are awash in a sea of food.   Our largest health problem in the USA is obesity and among the poor, it is the worst.   And please, no more talk of "well they eat the wrong foods!" - the point is, they are not starving and no one is, except maybe supermodels, or welfare parents who spend their WIC checks on themselves, and not their kids.

And yea, I've seen this firsthand - poor parents who zoom into the gas station and buy $5 a gas, a carton of cigarettes, and then slap their emaciated children when they beg for a candy bar.   "Momma needs her cigarettes, Billy!  Now get back in the car before I slap you agin!"   Act shocked.

No, a better way to feed people would be to provide them with some sort of credit card, based on their income, where they could go and buy food for themselves and their family.  Oh, wait, we already have that - it's called food stamps or the SNAP program.  And it works pretty well - again, America's obesity problem being proof of that.

So what is the point of these "food wasting" stories?   Well, again, it is part of this "America is bad" agenda - to try to make people feel vaguely bad about their country, their government, their institutions, their corporations, their employers, and whatnot.   And on a slow news day, it is not hard to put together a "food wasting" story by sitting behind some food processing plant and taking pictures of the dumpster.   They throw food away - big surprise.  It is as easy to put together as one of those "ultimate couponer" stories, or a squirrel on water skis.  Whatever gets the plebes to watch.

In the NPR piece this morning, they whine and moan that a salad processing plant (making those pre-packaged salads that are oh-so-handy for the on-the-go NPR listeners!) throws away packages of salad before their expiration date!

The deal is, of course, the salad would be expired by the time it gets to the store shelves, so in the trash it goes.  Since it is wrapped in plastic, it cannot be mulched.   And, we are told, this is filling up landfills and causing greenhouse gases!  Oh me!  Oh my!

Oh wait, another bullshit story.   Remember back in the 1980's we were told that disposable diapers were "filling up the landfills"?  Billions of tons of diapers would overwhelm us!   Then someone decided to challenge this evidence from the Bureau of Specious Statistics and it turns out that no, disposable diapers were not going to take over the planet, and if the numbers batted around by liberals were really true, the entire planet would be three feet deep in diapers in a decade.

The reality is, of course, that throwing away this tiny amount of salad (compared to the overall production) is the cheapest way to go.  Hiring someone to open each bag and dump it in a compost heap would be exorbitantly expensive and add to the price of food (and we wouldn't want that, although NPR listeners can afford to cough up another buck for salad, right?  But what about the pee-pul?).

The story goes on to criticize farmers for "overplanting" by 10% as if this were a shocking crime.  The deal is, of course, in the fresh produce business, you have to make more of the product than necessary as waste kills off a huge portion of the product at every step in the food chain.   From the grower, to the warehouse, to the packaging plant, to shipping, to the grocery store, and even in your refrigerator, a portion of fresh produce goes bad (or will go bad) and has to be thrown out.  If this is a shocking surprise to you, then you've never bought strawberries.

But really, the point of this blog isn't that "food waste" stories are stupid and bogus (and they are) but that it is frightening to me that the media is so controlled that someone somewhere decides that this is a "story" this week, and not last week and not next.

And lest you think I am picking on liberals, the conservative media is even worse.   The GOP and Fox News have their own coordinated "talking points" and suddenly its "War on Christmas!" which is now a five-year-old family tradition on the Fox network (and we all look forward to that, just as we do the Charlie Brown special!).   Come on, let's face it, it just isn't Christmas anymore without a war on it.

No, the point isn't that liberals or conservatives are bad, but that our media is subtly (or not so subtly) manipulated, and as a consequence, we are as well.    We are told what the burning issues of the day are, often by press release or whatnot.   And if it is a slow news day, whoever has the catchiest press release ends up winning the issue.

And when it comes down to catchy eye-candy or click-bait, well wasting food wins the Pavlovian emotional response contest every time.

You are, in short, being baited.   The "news" is nothing more than emotional triggers wrapped up in a shit sandwich, designed to sell you crap.

UPDATE:  A reader points out that, "the right wingnuts also like to push the "wasting food" button with those annoying e-mail forwards about illegals reportedly throwing away perfectly good "free or reduced cost" school lunches. Same story, different target audience...hmmmm."

Again, using emotional hot buttons to get at us.   This week, it is the liberal agenda.  Next week, the conservatives.   Probably should mention the illegals getting free gas or something.  That will get out the right-wing vote, right?

The reader also provides this hilarious video link, which is on point:

UPDATE:   The French found a way around the "wasting food" law passed in Paris.  Now, when you go to a restaurant, and you don't finish your entree, it is wrapped up for you to take home - what was formerly only a gross (and dangerous, from a food poisoning standpoint) American habit.    Since a half-eaten entree cannot be "re-used" or given to a homeless person (without making them sick) the only solution was to wrap it up and force the patron to take it.   And the patron probably puts it in the nearest garbage can.    Another example of why good intentions are not good laws.
Newer Post Older Post Home